Sale of 4th&B could mean the end of the venue

Tearing down the house? 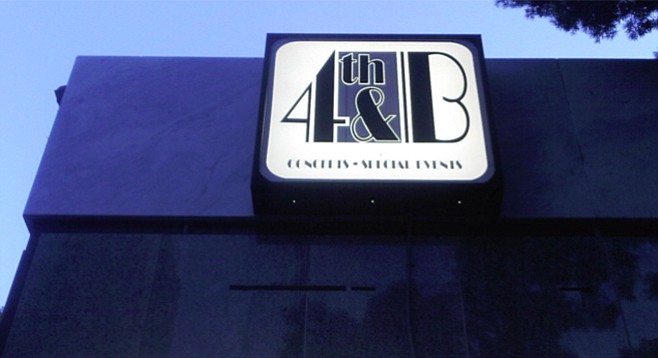 The downtown venue that hosted James Brown, Kings of Leon, Black Eyed Peas, X, Snoop Dogg, and TV on the Radio during its 17-year run, and which was slated to be refashioned into a state-of-the-art electronic dance mecca, has apparently closed for good.

The 4th&B building has been purchased by Tokyo-based IIDA Group Holdings, Ltd., which specializes in the “design, construction, and sales of residential properties.”

Three years ago, EDM impresarios David Dean and John Lyons told the Reader that they were taking over the lease of 4th&B, renaming it Avalon San Diego, and would remodel the 1500-capacity venue using the same vision that made their Avalon Hollywood showcase a success.

Months came and went, but the demolition/construction never happened. Last year, Dean told the Reader that Avalon San Diego construction would begin after they opened Bardot in Palm Springs in July.

Now Dean says plans for Avalon San Diego “are at a standstill. It’s been that way for a year.” He says the chances of music ever returning to 4th&B “depends on what the new owners want.”

Joji Kaegi, the Torrance-based attorney who oversaw last month’s purchase of the property by IIDA did not return a request for comment.

Public records show the 15,000-square-foot building and its property were purchased five years ago for $4.8 million by Crown Investments and was just purchased by IIDA last month for $7.5 million — a whopping $500 per square foot.

According to Tim Cowden, a specialist on downtown commercial property and senior VP of Collier’s International, says that investment would only be likely to pencil out in today’s real estate market if the building were razed and replaced with a residential high-rise.

Cowden says it would appear that the owners of the adjacent California Theatre building and these new owners of the 4th&B building “think there is a high probability of being able to change the existing zoning to allow residential construction on this block.”

A call to Civic San Diego, the land-use oversight group that oversees downtown zoning changes, was not returned.

The 89-year-old California Theatre has been vacant since 1990 and was itself a concert hotspot in the 1970s and ’80s. The 2200-capacity theater hosted shows by Cheap Trick, Patti Smith, Lou Reed, Journey, PiL, and the Dead Kennedys.

The California Theatre occupies half of the block. The other half is split between 4th&B and a parking lot.

Sad. There are fewer and fewer intimate venues for music acts. It pushes prices up at the remaining larger venues.

Whatever they put there would be a huge improvement. That whole block is an eyesore, and drags down that section of downtown. Call Miley Cyrus and see if her wrecking ball is available!