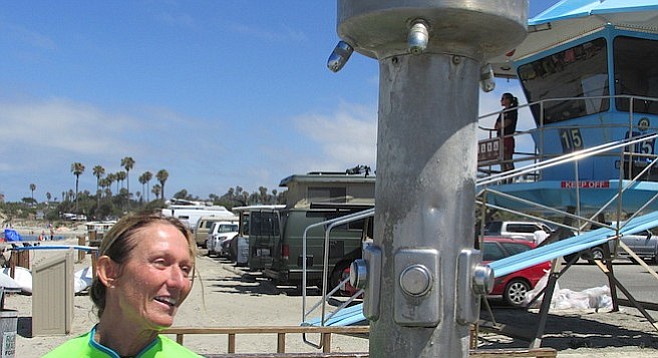 Even though the California Department of Water Resources reports a near normal snow pack after four years of little snow, the governor’s office is not ready to turn on the rinse-off showers at local state beaches yet.

The beach showers at Silver Strand, Torrey Pines, Cardiff, and South Carlsbad, were shut down last July. Later in the year, so were some campground showers and beach restroom sinks.

As many of the facilities were built in the 1960s, the sinks (at Cardiff, at least) don’t have sand traps, so washed-off sand could clog up the sewage lift station, resulting in raw sewage spills.

“We even found babies getting washed off in toilets,” said Greene.

While the water is shut off, Greene said her department is planning to replace several of the shower towers. She said the sand and salt air take a toll that requires a lot of maintenance on plumbing and fixtures. “Some we can’t even get parts for,” she said.

How many shower towers will be replaced is up to the state’s upcoming budget. Her district, which also includes three state campgrounds, is ready to implement needed repairs, improve access, and rehabilitate aging facilities once the budget is approved.

Local water districts, which supply the parks department’s water, have been getting small reprieves from state-mandated rationing, due to most districts in the county having invested in more water storage and infrastructure and bringing online the 50 million gallons per day produced by the desalination plant in Carlsbad early this year.

San Diego County actually has a surplus of water, according to the Voice of San Diego: in February, the San Diego County Water Authority reportedly dumped a half billion gallons of surplus treated and desalinized water into a Lower Otay Lake in Chula Vista. The water district has requested the Southern California-based water supplier, the Metropolitan Water Authority, stop sending unneeded water to the county.

As far as getting the showers turned on again, “[The governor] wants us to be the example on water conversation,” said Greene. “Only the governor can tell us to turn them back on.”

This water conservation business is a complete joke. Who ever heard of a municipality experiencing a water shortage dumping billions of gallons of treated water into a reservoir (which then means it has to be treated again)? I cannot believe the folks involved with managing the water are complete idiots, so I'm more inclined to think the water shortage is actually a fraud. Yes, we are in a drought, but no, there is no water shortage. It's a con, and no doubt for the money. Plus, the local honchos have realized that if they can shut off public water sources, such as showers and fountains, they can save $ on maintenance and blame the shortage. The public gets screwed of course, and we take another small step toward becoming a third-rate city in a third world country.

It is very hard to make sense of the decision to keep the water shut off. It's truly a trivial amount of water compared with, say, the amount of water used by almond farmers.

When something doesn't make sense there could indeed be fraud of some kind involved.

This is the dumbest thing ever. The amount of water used at the state beaches is trivial.