The crowd looked like understated Parrotheads dabbling in seapunk. 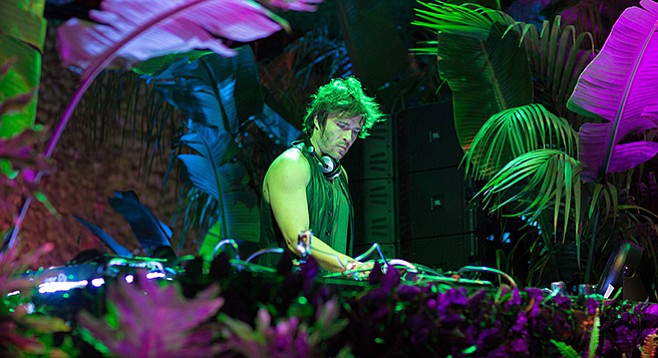 Coachella 2004 was kind of a big deal for me. Having no idea what we were getting into, a carload of friends and I drove 13 hours from the Humboldt State dorms to the desert retirement enclave of Indio. Because our foresight only extended as far as how many jugs of Carlo Rossi we would need, we slept in roadside sand and woke with dawn to get busy on the wine before entering the festival. Once inside, my mind was rapidly blown. I’d never seen anything like it. The place was huge. Beautiful people were everywhere. Some of my favorite musicians — Stereolab, Radiohead, the Pixies, Kraftwerk, Q and not U, Wilco, Moving Units — played throughout the polo field. At night, giant light sculptures glowed to life all around us. That was the first time it occurred to me that music festivals are mostly just electric playgrounds for grown-ups to devour drugs and overpriced Heineken while trying to listen to three bands at once. Needless to say, I was in love.

Since then, festival culture has become ubiquitous. California alone will see over 25 large-scale events this summer, many of which emphasize electronic music. Billboard estimates that 32 million people go to at least one music festival in the U.S. every year. For perspective, that’s the whole state of Texas plus twice the populations of San Diego and Tijuana combined.

These days, Coachella sells out of tickets (at $375 to $899) within about 20 minutes of going live. It set records last year as the highest-grossing festival in the world, with $84.3 million in sales and nearly 200,000 attendees over two consecutive weekends. With its success, Coachella has also garnered a reputation for being an extortionate coming-of-age ritual headlined by an uninspired lineup of, as one New York Times writer recently put it, “last year’s Grammy winners, makers of breakthrough records two years ago, [and] slow-boiling Spotify stars.” 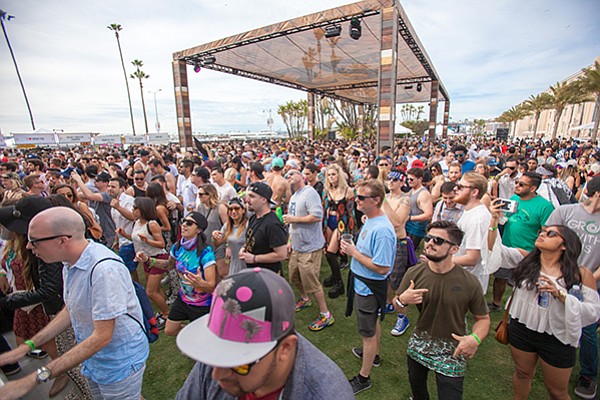 I wrote off Coachella a long time ago in favor of more innovative and accessible alternatives, so it was with more than a touch of skepticism that I approached the third biannual installment of CRSSD Festival — a two-day electronic music event co-produced by San Diego’s FNGRS CRSSD and Los Angeles’ Goldenvoice (the folks behind Coachella) for the first two editions before FNGRS CRSSD took the reins to host the event singlehandedly. 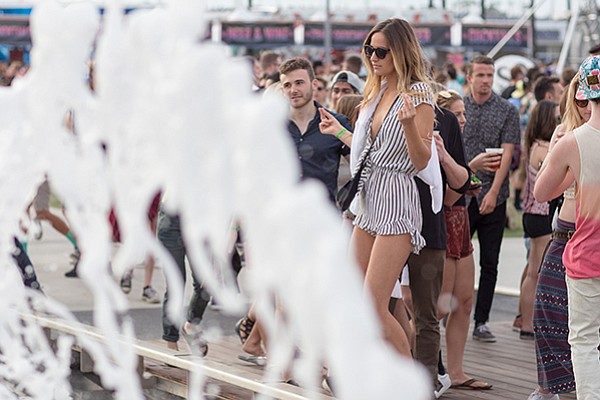 Just a laidback crowd dancing around the park’s many fountains

Held over the first weekend in March, CRSSD Festival maxed out Waterfront Park’s capacity of 15,000 both days, making it a more intimate electronic festival compared to, say, Electric Daisy Carnival, which drew 400,000+ over three days in Las Vegas last year. Headlined by relatively underground acts such as Odesza, Chet Faker, Tycho, Loco Dice, Skream, Claude VonStroke, and Tiga, CRSSD Festival highlighted tropical house, techno, and ambient textures rather than formulaic, blown-out EDM bangers. The festival’s 21+ policy also weeds out the younger crowd (much to the chagrin of my 2004 self), a dynamic that led OC Weekly to dub the fest an “anti-rave.” Instead of kandi clubbers in furry boots and Technicolor beadwear, most of the crowd looked like understated Parrotheads dabbling in seapunk. No festibro douchery. No bunk ecstasy overdoses. Just a laidback crowd dancing around in the park’s many fountains as the sun set over Point Loma and tunes boomed from three stages. 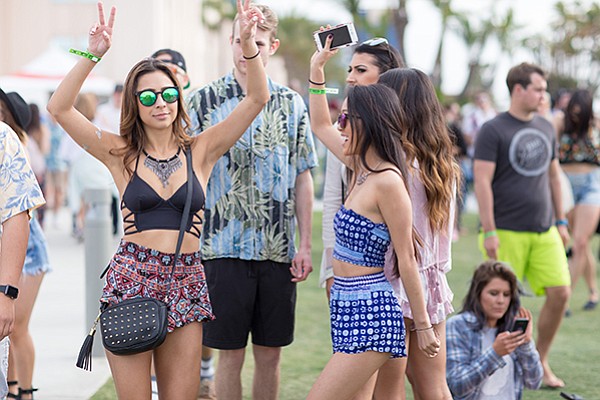 Plus: no kandi clubbers in furry boots

Polished but not pompous, CRSSD demonstrates how to utilize the scenic park wedged between San Diego’s skyline and harbor in a way that complements our city’s carefree demeanor, complete with overpriced craft beer in lieu of Heineken.