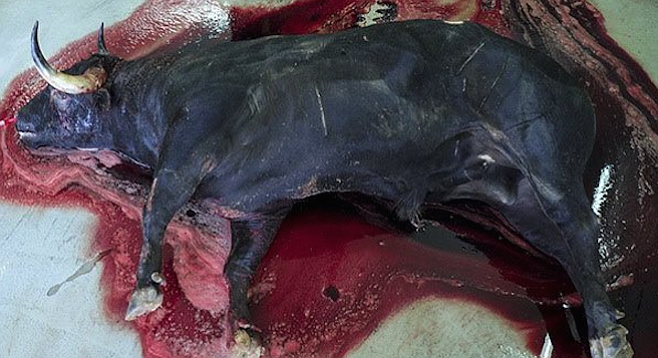 Opponents of bullfighting in Baja California waited for hours on Thursday, April 7, expecting the state legislature to debate and vote on a proposed law that would have outlawed the bloody spectacle, but at the last minute legislators voted to send the measure back to a committee for further study.

According to the daily newspaper El Mexicano, the motion to suspend consideration of the bullfighting ban passed on a vote of 12 in favor, 8 opposed, and 2 abstentions.

According to La Jornada de Baja California, the April 7 vote was the fourth time legislators have postponed consideration of the bullfighting ban.

The bill's sponsor, deputy Francisco Barraza Chiquete, who first proposed the ban in 2014, said the measure has been thoroughly vetted by appropriate legislative committees, but its opponents have once again managed to block it.

If Baja California were to outlaw bullfighting, it would become the fourth state in Mexico to do so, joining the states of Coahuila, Sonora, and Guerrero.

According to an April 8 story in La Jornada, proponents of the ban have taken to Twitter in an effort to pressure legislators into approving the measure.

The (translated) La Jornada story said, “Using the hashtag #BCLibredeTauromaquia, thousands of Twitter users shared comments supporting the proposal and against…. Deputy David Ruvalcaba — who sought the suspension of the vote — and also the rest of the legislators who voted in favor of it, considering that animal torture and mistreatment must not be synonymous with entertainment.”

The anti-bullfighting movement has enlisted the support of several prominent Mexican entertainers and other celebrities, according to the story. A petition circulated on the website Change.org has already gathered 90,000 signatures, the newspaper reported.

Proponents of the ban have speculated that the latest postponement was approved because of upcoming statewide elections on June 5 in which legislators will be up for reelection, according to multiple press accounts.

Inhumane bloodlust should be classified as a disease of humanity. 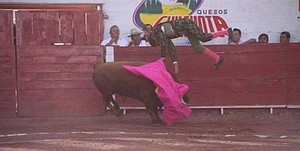 Mexico City - During a bullfight in Lerdo, Durango, bullfighter Rodolfo Rodríguez, El Pana, was hit by his second bull of the afternoon, and after being tossed into the air, had to be taken to the hospital. Reports indicated a whiplash injury was treated at the San José Sanitarium, in Gómez Palacio, Durango.

The Mexican bullfighter had lost sensation in his legs, and is currently listed in grave condition. El Pana was unconscious when he left the bullring in Lerdo until he arrived at the hospital.

Bullfighting: The sadistic; ritualistic "TORTURE" of bulls and horses for "perverted" entertainment. - It's not ART; it's not CULTURE; it's not SPORT; it's "TORTURE."

Bullfights are the most "indefensible and abhorrent" type of animal abuse that IS, and always WILL BE; a "TRADITION of CRUELTY."

Bullfighting is not a fight at all, but a systematic torture-killing that pits a gang of armed thugs wielding razor-sharp barbed spikes, spears, swords and daggers (these weapons are designed to inflict intense pain and cause massive blood loss to weaken the animal) against a trapped; lone, terrified; confused; fatally disabled; wounded animal.

It’s a sickening industry based on HORRIFYING victimization; sadistic abuse; extreme cruelty and mutilation and torture of bulls (and horses) during the cruel exhibitions of bullfights (which are barbaric 'blood fiestas') in Spain; Portugal; France; Mexico; Colombia; Ecuador; Guatemala; Peru and Venezuela (in which the "Majority" of the native people are campaigning for Total Bullfight 'ABOLISHMENT').

The Bull: Handlers weaken and cripple the bull for days before the bullfight: They starve him; give him laxatives and deny him water, or they put massive doses of sulphates (epsom salts) in his water to induce severe diarrhea, intestinal pain and subsequent lack of coordination in the ring. He is beaten with heavy sandbags on his back; kidneys and testicles. He is wedged into a tiny corral and drugged to make him docile. Up to four inches of horn is painfully hacked off with a saw down to the tender quick (that bleeds) to interfere with his ability to navigate; the mutilated stump rounded off with a rasp and smeared with black grease; his hooves are burned with turpentine so that he cannot lay down; he is locked-up in total darkness for days while being harassed and tormented.

They blind him with vaseline and salt rubbed into his eyes and drug him; they stuff his ears so that he cannot hear; they stuff his nostrils so that he cannot breath. Just before he enters the ring he is harpooned/stabbed in the back with a sharp; steel "breeder's mark." In the ring, they drive a large razor-sharp pic (lance) into his neck muscles to induce massive amounts of blood loss and so he can’t lift his head; they stab multiple razor-sharp harpoons (banderillas), which many times are rigged to explode with burning fire into his back. By the time the matador appears, the bull is weak from blood loss and dizzy from being chased in circles.

The Horses: The horses used in bullfights as "living walls" are old and drugged. They are blindfolded so that they cannot see; wet newspaper is stuffed in their ears so that they will not hear the approaching bull and run away; their vocal cords are cut so the audience will not hear their cries. They wear long blankets to hide their entrails, which spill out when they are gored and disemboweled by the tortured; agonizing bull (who has been deceived into thinking that the horse is causing his pain, instead of the "wicked human" riding the horse).

It’s no fun to see an innocent, crazed animal tortured before a screaming crowd of people, who should be hanging their heads in shame. Even if you leave after 15 to 20 minutes, the damage has been done – money has gone to support this hellish, satanic business, which "decent people" (in the bullfight countries and all over the world) are working to "end."

The continuation of bullfighting depends on "Corrupt" Government Subsidies and to an even Greater Extent; the "Ignorant Tourist" who is unknowingly supporting this cruel industry. Don’t be an "accomplice" to this Vatican Ordered; Jesuit "Savagery" by supporting it with your "tourist dollars."

So-called *"bloodless/cruelty-free" bullfights ('corridas incruenta') are practiced in the United States, where bulls are wedged into a tiny corral and mutilated (up to four inches of horn is hacked off with a saw down to the tender quick (which bleeds) to interfere with his ability to navigate); locked-up in total darkness for days and teased and harassed.

Mutilated; teased; terrified; confused and tormented, only to be killed once outside the arena in a Mexican bullfight; a slaughterhouse or elsewhere.

"Bloody or bloodless," bullfighting is a "senseless, degrading" spectacle that has no place in a "civilized" society. There is NO SUCH THING as a "CRUELTY-FREE" BULLFIGHT.

Bull Runs: Spanish "Bull Runs" are "part" of the "Evil; Sadistic; Cruel; Sleazy" (and rightfully so; "Dying-Out") bullfighting industry; they are classified as "bullfights."

A Tradition of Cruelty: All the bulls that run on the streets of Pamplona during the "Running of the Bulls," from July 7th to 14th, are killed that same afternoon in a bullfight, in the name of San Fermin and his traditional "Fiesta." Torturing and killing a defenseless animal should not be celebrated as tradition. People have always tried to use tradition to justify horrible things, such as child labour and slavery. But tradition doesn’t make something right. Bullfighting is a cruel blood sport that should have been relegated to the history books a long time ago. No matter what it's history, bullfighting consists of the torture, mutilation and slaughter of animals for entertainment.

The "Running of the Bulls": Bulls are bred in fields and are not accustomed to the noise of the crowd or being surrounded by people. They are prodded onto the streets with electric shocks and shouts. They run to the open area and are hit by runners with rolled up newspapers. The corners of the bulls’ route are quite sharp, and the animals often lose their footing and slide into walls, breaking bones and injuring themselves. All the bulls who slip and slide on the streets of Pamplona are running towards a bloody; horrific; torturous death in the bullring.