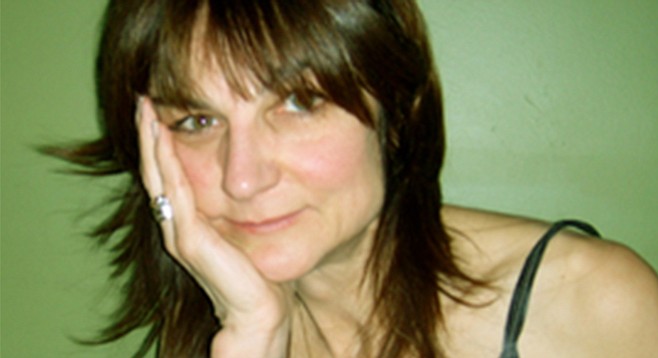 On October 6, rock critic Jaan Uhelszki appears at Grossmont College, spotlighting her friend and fellow critic Lester Bangs, who grew up in El Cajon and attended Grossmont. Uhelszki took some questions from the Reader.

At Grossmont, are you planning to give a speech, do Q&A, or both?

“I’m going to be giving a talk about my beginnings in journalism and what it was like to work at Creem magazine. I’ll talk about sitting next to Lester for six years and what that was really like. At the conclusion, I’ll take questions.”

You started at Creem the same day Lester did. What were your initial impressions of him?

“He looked like an ‘adult,’ when everybody else looked, well, like members of the MC5 road crew or like slightly demonic hippies. Lester looked like a visiting professor, with neatly trimmed hair and his shined shoes and his over-extended mustache. He was wearing a button-down shirt over a sparkling white undershirt.

“During his stay, I occasionally spied him actually wearing a suit jacket — he owned one in a Prince of Wales plaid. In hindsight, I think this may have been just his way of making a good impression, because there was little evidence of his sartorial splendor once he settled in. I remember wondering how he could look like this and write like that.”

What were Lester’s great strengths as both a writer and an editor?

“He was a fast thinker. He had strong opinions and knew how to support them. He had a vast knowledge of music and was a deeper thinker than some of his comical writing might lead you believe.”

Lester’s become a myth over the years. What about Lester the person would surprise a latter-day devotee?

“He was funny, compassionate. A good listener. A truly good friend. He was truthful to the point of it being painful. A tremendous amount of fun, and up for anything. He would tell anyone anything, often to his own detriment.”

Did Lester talk about his childhood and adolescence in the San Diego area?

“A little. He missed the burritos and his girlfriend Andi.”

What’s your best advice to young music journalists of today?

“Don’t take no for an answer. Research before you interview your subjects. None of us knew what we were doing in the beginning. Neither will you, so just act as if you do....”