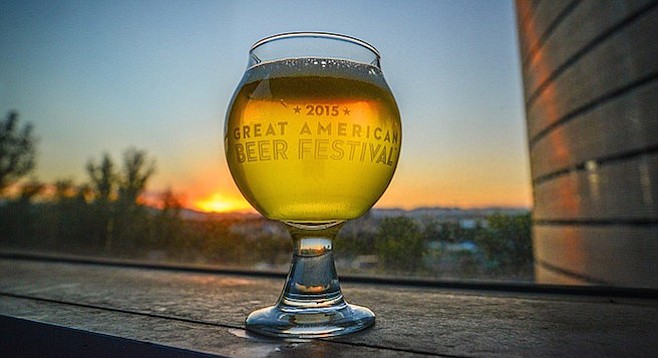 The 33rd annual competition took place in Denver, and when winners were announced Saturday, San Diego County breweries took 19 medals total. To put this in perspective, 19 is the same number of medals won by the entire state of Oregon. San Diego's 19 medals is up from 13 won last year and included 6 gold, 2 silver, and 11 bronze.

Along with best-brewery honors, Rip Current brewers Paul Sangster & Guy Shobe earned the Brewer of the Year distinction for a brewing company producing under 1000 barrels in a year. Rip Current also won a silver medal, and gold for its Break Line Bock.

Another beer company that fared well was Pizza Port, which won five bronze medals between its breweries in Bressi Ranch, Carlsbad, Solana Beach, and Ocean Beach. The Ocean Beach brewery bronzed twice — the third year in a row it's won multiple medals.

One of those was in the Coffee Beer category, which saw New English Brewing Co. earn gold with its Zumbar Chocolate Coffee Imperial Stout, named for its Sorrento Valley neighbor and roaster, Zumbar Coffee.

Local breweries also won gold in two of the all-important IPA categories. BNS Brewing & Distilling Co. took top American-Style India Pale Ale with its Revolution IPA. This is a crazy competitive category among San Diego brewers alone, so to win among hundreds of entries representing 50 states should give the Santee beer company plenty of swagger going into this year's Beer Week. Societe Brewing Co. also gets bragging rights for its Coachman, winning gold in the Session India Pale Ale category.

Though exact figures haven't been released at this writing, in 2014 over a thousand breweries submitted more than 5500 beers in the competition. Forty states split the 275 medals awarded among 92 categories in the all American contest. California took the most at 67, with the next closest being the festival's home state of Colorado, with 35. See below for San Diego's medalists. For a complete list of winners click here.