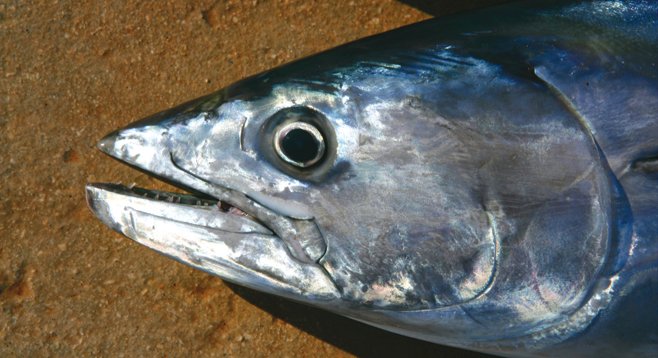 Inshore: No change here, except a couple wahoo being picked up on ¾-day trips. Half-day boats are fishing in tight for calico and sand bass, rockfish, sheephead and a few yellowtail while a good number of the ¾ day boats are fishing a little further out and looking for tuna and dorado. Yellowtail have been sighted eating bait from just behind the surf and out to the offshore banks and islands. Another historic catch: A 662-pound blue marlin was caught by a private boater within 10 miles of Mission Beach

Outside: The bluefin tuna seemed to have left town overnight. With the warmer water bringing a mini invasion of wahoo and marlin, bluefin, which generally like water a little cooler and are usually found more so with albacore than skipjack, have moved out and north. The skipjack tuna catch also increased 300% over last week’s total and dorado are up 25%. Yellowfin are holding steady as the main offshore hook-up at three+ per rod on the boats targeting them.

Freshwater: Catfish, catfish, and more catfish. The old saying goes, “When the moon is big and yellow and pumpkins are ripe on the vine, it is time to rig for the whiskers if you’re wetting a line.” But then, I’ve heard lots of others implying autumn is the high season for big cats. Bass are following their usual fall pattern of eating a little lower in the water column with drop-shot plastics and medium to deep running crank-baits working best.

Whale watch: On the heels of a record gray whale season this past spring, the blue whale season for folks getting out on a whale-watch cruise in San Diego waters has been equally rewarding. Hornblower, alone, has reported to date 173 blue whales, including 9 cow and calf pairs, 29 humpback whales, 12 fin whales, 7 minke whales, 20,750 common dolphins, 47 risso dolphins, 13 hammerhead sharks and 5 mola mola, or ocean sunfish.