Who you callin' Kevin? 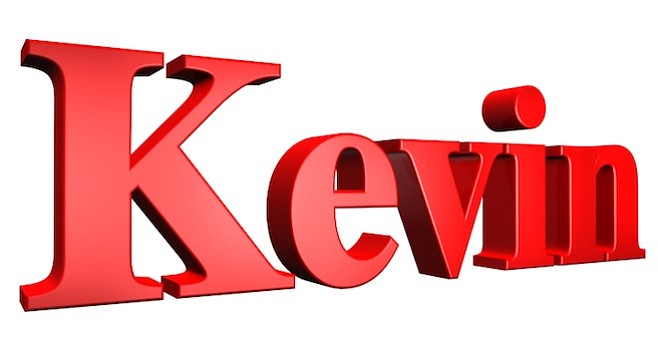 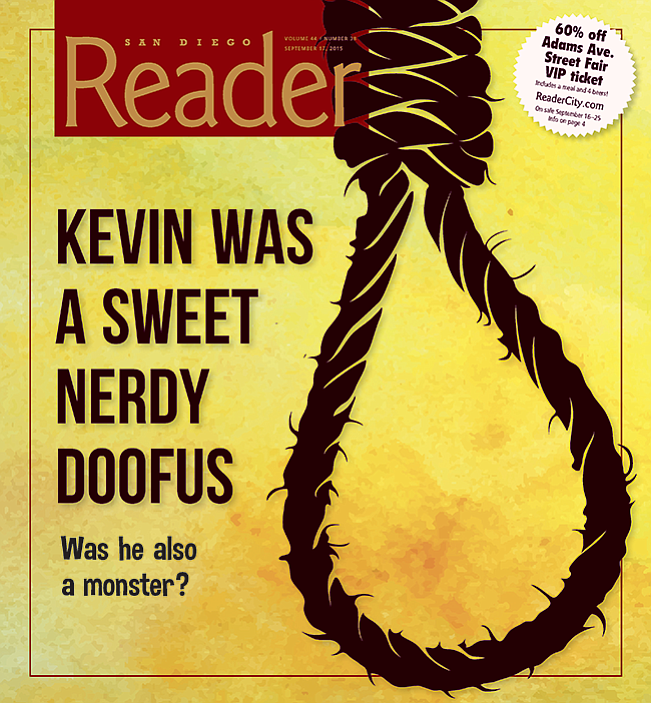 I’m looking at the cover of your September 17 issue. Hey — this ain’t cool, man. My name’s Kevin. You should have put the knucklehead’s picture on there so that people I’m associated with would know. Kevins are cool, all right? Hasta luego.

One Leg at a Time

In your article, “Kevin Was a Sweet, Nerdy Doofus. Was He Also a Monster?,” I was very shocked how Detective Lambert and the San Diego Police Department were able to admit evidence regarding getting the search warrants. Is he being held accountable in this lawsuit against the City of San Diego that Mrs. Brown has? If not, why can’t he be held accountable for falsifying information? That’s a felony!

A police officer is held accountable for his standards. I know this, and I was military CID. I hope Mrs. Brown is able to hold Detective Lambert accountable. If not, please write another article on his inability to do his job properly, and the fact that he was trying to hang a cold case on somebody who was totally innocent.

The bit about stuff not being cross-contaminated in the lab — that is B.S. If they’re not careful, it does get cross-contaminated. But the fact of the matter is that Detective Lambert falsified information. Unbelievable!

The police officers in the city of San Diego and the D.A.’s office — they’re just as corrupt as the people who break the law. Why aren’t they held to a higher standard? Especially the investigators. We’ve got two or three of them who have been convicted in federal court, and they are still working for the D.A.’s office. These are federal court felonies, and Bonnie Dumanis has done nothing to straighten out her office.

Why is the top cop in San Diego not being held accountable for her actions? Why don’t we call for her resignation? She’s no better than all of us; she puts on her pants the same way: one leg at a time.

Everything I’m reading about in this article — her office needs to be held accountable to a higher standard.

Go to the Places You Write About

In your September 17 Neighborhood News, you had two specific articles that drew my attention.

In the first, a guy in PB got hit by a car, a car that had made an illegal left turn across a main road. That was the only mention of it being his fault, but you did spend a great deal of print on the shrubbery and landscaping. The sign says “No Left Turn” for a reason! The jackasses who think that sign, or any similar sign, is there for a joke, are just that: jackasses!

A man is dead because some jackass was too lazy to find a route from where he was that was less convenient. Blame the driver, not the pedestrian — not the trees, not the bushes!

The other glaring bewilderment was the story about Marian Catholic being torn down. You start the article with it being on the border of Imperial Beach and South San Diego, or what is essentially South San Diego. You do not use the “parcel of land on Coronado Avenue” until towards the end of the story! What I want to know is, on what map do Chula Vista and Imperial Beach share anything? I would also ask the same question as to Coronado Avenue and Chula Vista.

My guess is that anything south of 8 is all either East San Diego, Nasty City, or Chula Juana, and I.B. is right there will all of them?

Get out of your office and go out to the places you write about — at least the writer should! I notice a number of geographic inaccuracies in many of your articles, and I always wonder if you are even in San Diego!

City Will Not Fix

I read your story, “Don’t Worry about that Water Leak." I’ve been reporting water leaks to the city for seven months now for one water leak, and the other water leak for two and a half weeks.

The one water leak is the water main in front of the park of South Clairemont Recreation, and the other one is behind the park where they built the new little soccer field, and they busted the pipe way back when. I contacted people; they saw the leaks, but they will not fix them.

Destruction of a Village

I was saddened, though not surprised, to hear of Cosmos Coffee’s closure. Once that big old fig tree went, it was a clear sign of things to come.

One wonders which councilmember’s or contributor’s construction company inspired this deal. Don Bauder, I smell a story!

Regardless, perhaps you have to destroy the village to save the village.

I’m calling about “Stay Out of San Elijo Lagoon.” All these do-gooders who paddle around in their kayaks, and they protest the oil companies — well, they need to remember that their kayaks are made out of oil.

To Educate, Not to Police

The lack of due process, poor training, and faulty investigations (often with the interference of school officials) have led to many lawsuits against school police agencies. One case involved a school’s police officer filing a lawsuit against his own agency, the San Diego Unified police.

I hope Hargrove’s report results in a statewide investigation of school police agencies. The primary public mission of schools is to educate, not to provide police services.