Wavves' slavves come out to play 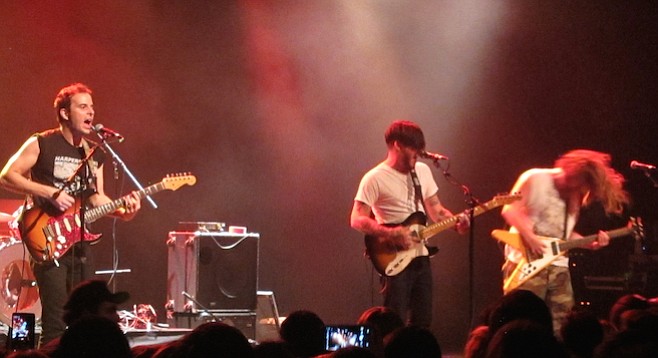 A rainy night in North Park failed to keep the punk-rock masses away from the Observatory for Wavves’ San Diego tour stop. After a rollicking set by Chicago rockers Twin Peaks, Nathan Williams unleashed his fearsome foursome to a hometown crowd.

Whereas Wavves began as a bit of a haphazard bedroom project, with equally haphazard live sets, the Wavves of 2015 is a live beast. The current lineup benefits from the energy of drummer Brian Hill. Locals may recognize him from his time spent in the Soft Pack, but that band only hinted at the ferocity that he brings to the kit with Wavves. Equally impressive is guitarist Alex Gates, whose tone really brings some muscle to the songs, and great lead playing as well. As a result, lo-fi, fuzzed-out songs from the band’s debut album, such as “So Bored,” are given new life as raging rockers.

Wavves’ slavves ate up the proceedings and kept the bouncers busy controlling an active pit. The kids certainly came out to play for this show. One sneaky fan snaked past four or five bouncers and pulled off a stage dive. Impressive.

The band ended the night with a trio of encores (“King of the Beach,” “Demon to Lean On,” “Green Eyes”) that were crowd favorites. This reviewer’s highlight was “Way Too Much” off of their upcoming album, V. With its herky-jerky and hook heavy Devo vibe, this song is sure to become a live fave on tour.