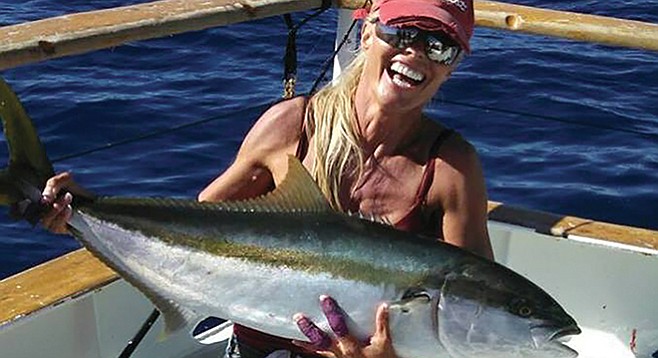 Katharina Eckert started fishing the sportfishing boats out of the San Diego area about a year and a half ago. At first, she was apprehensive: “It took some convincing of local captains to talk me into fishing on the open-party boats, because every time I would see those pulling in or out they were loaded with men.” Eckert entered her first-ever fishing tournament and took second place in this year’s International Yellowtail Derby and holds the lady anglers record in that event.

Battle of the Sexes Fishing

Soon, Eckert began inviting her friends along on fishing trips and formed a group called SaltySoCalVixens. As a group they can charter trips and pick what species they will target considering cost and current activity. Eckert’s favorite boats are the Mission Belle, Prowler, New Lo-An, Vendetta, and Daily Double.

As the Vixens caught on (there are 68 members now), Eckert decided to fill charters equally represented by gender and, thus, have friendly “Battle of the Sexes” fishing competitions. The next one is on September 20 and has a few spots remaining. The next scheduled event after that is October 11.