No Miami-ization of Mission Beach 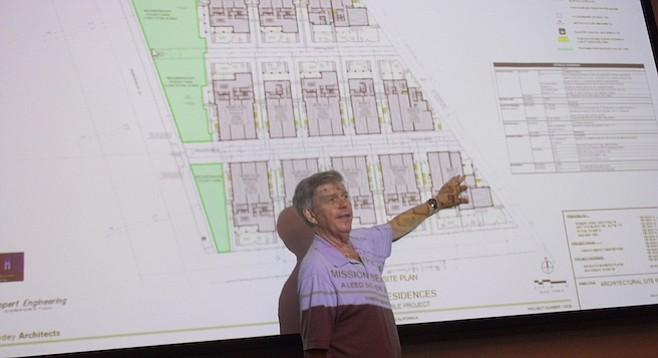 Rudeness ruled at a Mission Beach Precise Planning Board meeting Tuesday night, September 15th, as the board rejected a plan to build 51 homes on land that had once been set aside for an elementary school.

Boardmembers asked developers and their staff questions, then loudly disagreed while the developers were still trying to answer. Board chair Debbie Watkins pounded her gavel at least three times to stop speaking-out-of-turn disruptions at the two-and-a-half-hour-long meeting.

At issue: the project proposed for land bound by Santa Barbara Place on the south and Mission Bay Boulevard on the west. Boardmembers complained that the developer had hired a lobbyist and gone directly to District 2 councilwoman Lorie Zapf to push for the project. Boardmembers rejected each component the developer presented — except the color scheme.

The San Diego Unified School District held the 2.3 acres for a school until 2013, when the parcel one block from the bay sold for $18.5 million — despite then-mayor Bob Filner's plea to keep it in the public’s hands.

McKellar McGowan wants to develop 51 homes in 18 buildings, with one single family residence, two duplexes, four four-plexes, and ten triplexes — a total of 178 bedrooms. It's designed to mimic and line up with the shared alleys and building fronts opening on shared walkways. Every building is three stories tall.

"It's a beautiful project," said one boardmember. "I'm against it."

Boardmember Dennis Lynch gave several presentations on why he opposes the project, starting with Mission Beach's history — the area was originally developed by John D. Spreckels in 1914, later than O.B. and PB because it was difficult to build on sand.

"Mission Beach is the most densely developed residential community in San Diego with a land-use designation over the majority of its area of 36 dwelling units per acre," according to the city's website. "It is also comprised of the smallest lots in the city, with standard lot areas ranging from 1250 to 2400 square feet."

Residents accused the developer of recutting the parcels to get larger lots — which would then let them build larger houses and homes on them.

“[Lot size] is the way Spreckels limited development in Mission Beach," said Lynch. "The purpose of the precise plan is to prevent the Miami-ization of Mission Beach."

The group expressed concern about having 102 parking spaces added to the area; about how the height and density will affect airflow between the houses and on the bay one block away; and how the project will tower over nearby homes, causing shadow where there is now sunlight.

"We don't have 30-foot high buildings anywhere in Mission Beach," boardmember Peggy Bradshaw said. "While this may be beautiful for Scripps Ranch, it's not Mission Beach."

An audience member who argued with the boardmembers (“Mike”) said he started out supporting the board but fell out with them.

"It's going to be developed," said Mike. "I think we should work with the developer toward what would satisfy all of us instead of getting in an all-out battle we drag to the [city] council."

But boardmembers explained that voting against the project would make it possible to work with the developers — and did just that (8 against, 2 abstentions).

Wow, finally some good news on the over development of the beach areas.

If we're in a "drought", no building permits should be issued for anything but replacement structures. How are any of us supposed to believe there's a a shortage of water while tens of thousands of new water users are being welcomed in?