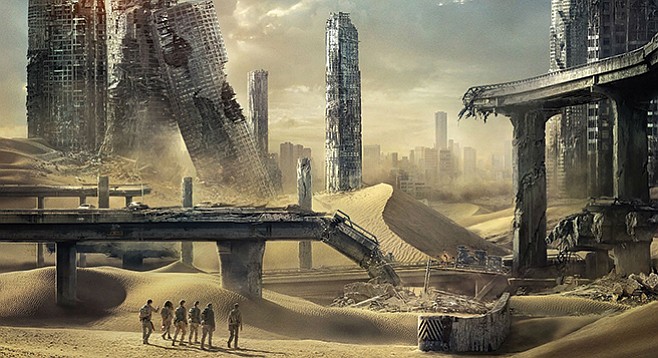 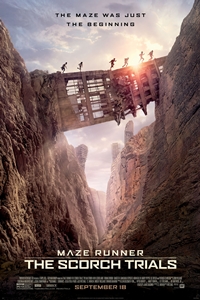 The Maze Runner: The Scorch Trials — part two of Wes Ball’s adaptation of the hit YA trilogy — runs and runs and ultimately stumbles on its way to part three. But first, there’s lots of running, both from evil authority figures who want to harvest our heroes to help fight against the zombie plague, and from those poor souls who have already fallen victim to the zombie plague. (Resist the temptation to count the number of times people urge each other to “Go, go, go!” and “Come on!” It will only lead to grief.) And also, to a lesser extent, from the past, when lead runner Thomas (Dylan O’Brien) worked for the bad guys.

The interesting question of Part One — is it really worth dying to know what’s out there? — gets trampled underfoot, as does Part One’s whole reason for being. (What was the point of sending your best hope for survival dashing through a deadly maze full of robotic bugs again?) Instead, we’re served up the hoary contest between the good of the many and the needs of the few, muddied only slightly by the notion that anyone would do whatever they could to protect their own. (“Whose side are you on?” asks an interrogator. “My friends’,” answers Thomas. You and everyone else, kid.) The bad guys are as selectively competent as Imperial Stormtroopers — swarming and deadly one moment, bumbling and hesitant the next — and the see-saw gets tiresome.

It’s nice to see actors like Alan Tudyk, Patricia Clarkson, and Giancarlo Esposito getting work, the great piles of concrete and sand oppress as they ought, and some action sequences still manage to thrill. But that’s not enough to keep the silliness from showing through, and definitely not enough to keep the 131-minute runtime from feeling like a bit of a...trial.