Online arguments are not meant to be won 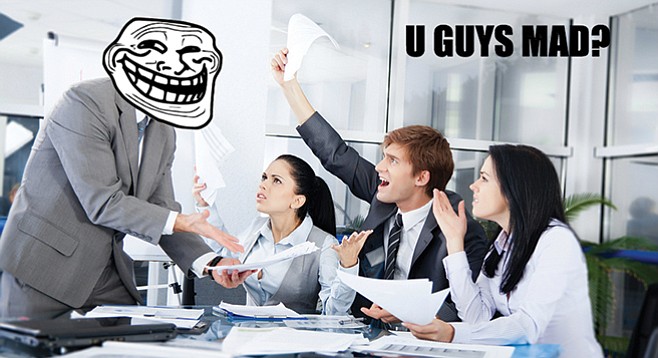 I belong to a local community organization, relatively small in number, but passionate in spirit. Like any group, ours gets its fair share of agitators from time to time. I like to think the people in my community share a common bond — a sense of kinship, if you will — and that the occasional bad apple can hardly spoil the bunch. Our present antagonist, however, has proven to be an almost totally negative force. I don’t want to get into specifics, mostly because I doubt the exact details change anything, but also because I wouldn’t stoke an already raging fire. Part of what makes this individual such a toxic force in our community is that our antagonist’s preferred means of communication is digital. Sometimes, this person opts for preposterous emails to community members, but the usual means of attack is the airing of “grievances” in rambling Facebook and message-board posts. In person, the antagonist prefers to avoid conflict. For my part, I disagree with anything and everything this person is doing, apparently with no intent beyond sowing discord, but I have no idea how to participate constructively in these “discussions” (a term which I use most loosely). In the long run, I just want the madness to stop. What to do?

Long ago, maybe as much as 10 or 15 years, back before most people can remember, during what passes for social media’s Dark Ages, dealing with internet trolls was simple. To engage the troll was to concede defeat, for the troll’s sole purpose was, and is, to generate conflict. Conventional wisdom held that the only way to quell a squalling, attention-seeking online personality was complete and total non-acknowledgement. An insensitive, trollish comment pegged to the end of an otherwise perfectly reasonable, early-2000s Livejournal entry (about the myriad ways in which OK Computer changed some totally anonymous person’s life) might be seen by as many as eight or nine of the average collegiate hipster’s closest friends. If ignored, 99 out of 100 online antagonists would slink off elsewhere.

Nowadays, in the throes of the new millennium’s digital Enlightenment, the gap between face-to-face society and online communication is narrower than the average redneck’s grasp of properly dressing a kale salad. Facebook groups and message boards are ubiquitous tools for communicating within real-world social circles, and avoiding the kind of antagonism that you’re experiencing is pretty much impossible. I daresay some angry Facebook ranters might even have at least partially legitimate gripes.

(Please note how I qualified that with “some” and “partially.”)

Even so, winning an argument via the internet remains patently impossible. You want to be involved in your community’s discourse (and rightly so, since communities of like-minded individuals are incredibly rewarding), even if it means acknowledging the rantings of a known troublemaker. Mind these cardinal rules before you engage in spirited online “discourse”:

Don’t try to win, because you can’t. Rants aren’t arguments. If you have something to say, say it, and otherwise try to carry on as normal, effectively sidelining the antagonistic party.

Check your facts. Then, check them again.

Above all, maintain your dignity. Sliding into abusive name-calling may feel oh-so-good (I liken it to the warm fuzzies you get from a well-curated 1980s Pandora station), but there’s no changing the fact that hurling insults is basically the Debbie Gibson of argumentation strategies.