Expect the unexpected in the local big blue 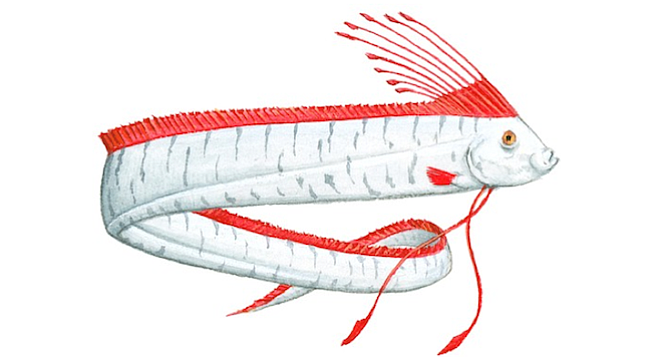 While El Niño conditions continue to influence the great fishing along the California coast, reports of "once in a lifetime" catches seem to diminish in meaning. It's not all that surprising when a dorado or tuna is caught by a kayaker just outside. Not when, in a 14-month period, tuna and dorado have been free-gaffed in L.A. Harbor, a dorado was filmed swimming next to the Queen Mary, foaming tuna boils 1.5 miles off Imperial Beach and, well, kayakers are doing it occasionally. Unheard of in San Diego water before, yet almost expected in this Indian summer-like water around 75 degrees and "tuna-blue" just off the kelp.

But really, a yellowtail from the Mission Bay jetty? Not just any ol' tail either, a 45.6-pound yellow that ties the 36-day International Yellowtail Derby winning fish from this year. On 25 lb test. That's what San Diego angler Jarred Davidson did Monday. Story to follow on that one.

The day before, La Jolla Lifeguards called Scripps to come collect a 15-foot oarfish that washed up at the Shores. Just where are we again? San Diego? Yeah, just making sure. Granted, oarfish do occasionally wash up in the area, but with everything else going on out there in the local big blue, it does seem to paint another splash of exotic color to the canvas of this season of "once in a lifetime."

Seems as though the dorado catch has dropped off a bit for the 3/4 -2-day trips, though those boats are still racking up good numbers of yellowtail, 20-35 lb class yellowfin and occasionally (especially on some of the 1.5 to 3-day trips) fat bluefin. Bluefin tuna generally bite in the gray hours of the evening, which might explain why 1.5-day and longer trips show better catches on them as the one-day runs are usually on their way in by 2 p.m. or so.