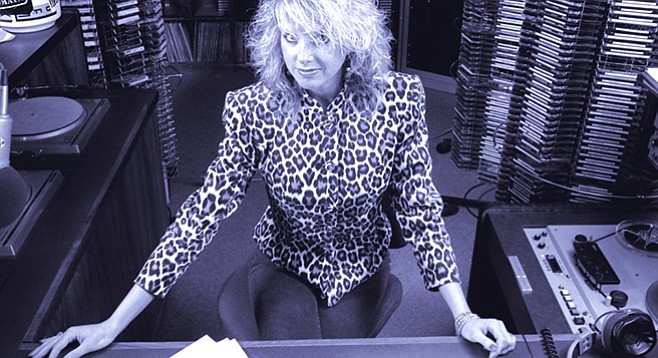 “She raised the bar,” KGB FM morning-show cohost Coe Lewis says of the radio personality who held her same position some 32 years ago. “Sue Delaney was a game-changer,” Lewis explains. “I think she was the first local female deejay to obtain that level of fame and notoriety. And,” she adds, “Sue was the reason I got into radio.”

Sue Delaney-Leighton died at her home in Los Angeles on August 21 following a long illness. She was 56.

“If I was still there,” former KGB FM program director Larry Bruce tells the Reader by phone, “she’d still have been doing mornings.” Delaney debuted as host of the KGB morning show with Jeff Prescott during the spring of 1983 after Bruce hired her away from 91X FM. “She had a great voice, a great personality, and I thought she sounded like a rock jock, not an alternative jock,” he explains.

“Everybody underestimated her because she was beautiful. She projected great warmth, a sense of fun, and she could be sexy without being dirty or crude. She had a great heart, and that’s what people responded to.”

“In San Diego, she became the personification of rock ’n’ roll,” remembers Delaney and Prescott morning-show producer Scott Chatfield. “Some of her fans were so obsessed that the station had to get restraining orders against them.”

When Delaney left broadcasting, she moved to Los Angeles. There, she took a position as hostess at the Daily Grill, where she met her future husband, Doug Leighton, who happened by the Grill for a business lunch one day.

Leighton clearly loves to talk about Sue. He works for Panasonic in the professional imaging division. On that afternoon in 2003, Leighton asked Sue for a date. She said no. This would become a pattern over time, him asking her out and her saying no. Leighton kept trying. Finally, one day she agreed to a lunch date.

“I think it was the day before Valentine’s Day. She wanted to know if it was okay to order lobster.” It was. “And when she went to cut into it, the whole thing flipped into her lap. That’s when I said, ‘I love this girl.’” They were married a year later.

Leighton says Delaney continued to work as the hostess at the restaurant until chronic pain resulting from foot surgery forced her to retire.

Delaney is survived by Leighton and by her son from a previous marriage.