Southern Indiana: the way vacations used to be 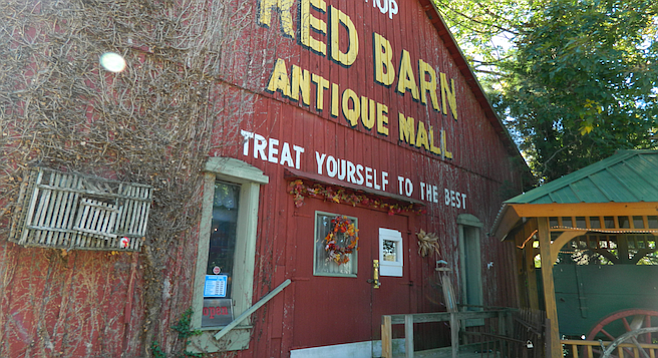 How often have you come home from a vacation only to need another vacation? Some places are just plain stressful: white-knuckling your smartphone, camera and cash from would-be criminals on the street. 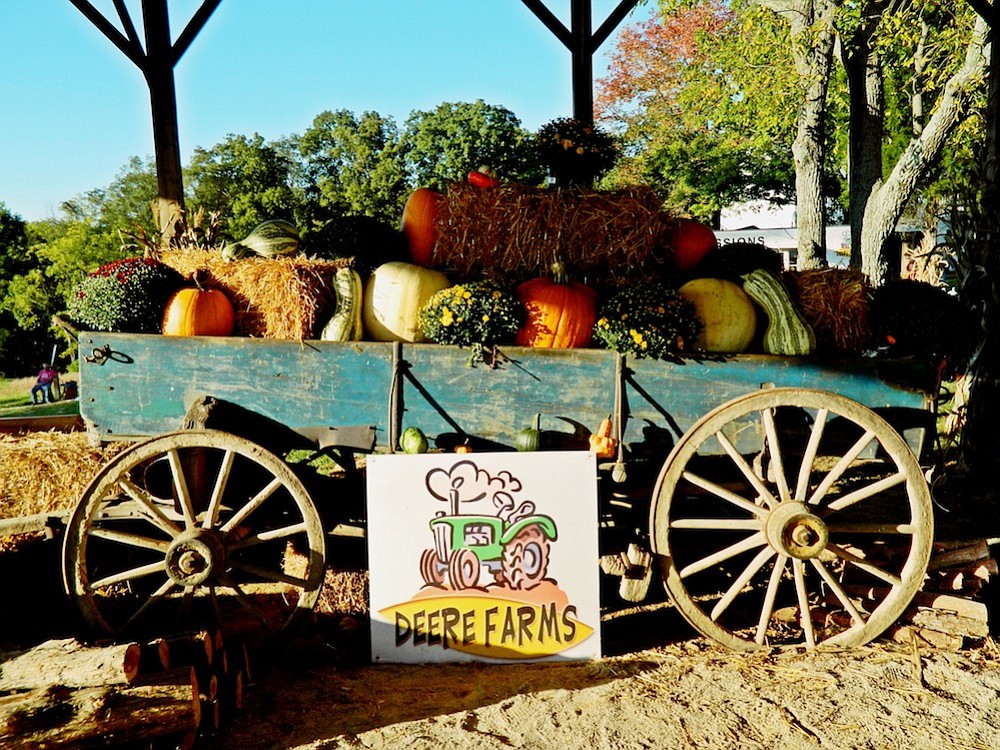 As it turns out, you can go back to how things used to be! Just across the Ohio River from Louisville (so you can still get your “big city” fix) is a collection of quiet Southern Indiana communities, including historic Corydon: not only Indiana’s first capital but also the boyhood home of James Best, The Dukes of Hazzard’s Rosco P. Coltrane. This part of the state is the oldest, so it’s a good place to celebrate Indiana’s bicentennial in 2016. Southern Indiana also boasts Mauckport, named last year by Oreo as one of the “sweetest” small towns in the US.

Imagine enjoying the afternoon at a winery, listening to local bands play… and staying. Scout Mountain Winery in Corydon has The Hideaway Bed and Breakfast. It’s a guesthouse on the property – what people in the biz call an “unhosted” B & B – that sleeps 6. A full kitchen and laundry room make you feel right at home. Complete with fire pit, outdoor hot tub and Asian pear trees ripe for the picking, you get the serenity and privacy that your soul craves.

History and adventure come together at Squire Boone Caverns. Daniel Boone and his brother Squire discovered the underground caves in the 1790s. Later, Squire was able to save himself from violent Indians by hiding in them. He is buried in the caves; the public can see his tomb. Wear secure shoes and take a little jacket, as the caves are 54 degrees year ‘round. The staircase going down is long and tightly winding. There are also historic log buildings on the grounds.

Indiana used to be our country’s frontier, a chain of forts and military outposts before it became our 19th state in 1816. Corydon has kept its original capitol building, Governor’s headquarters and other historic buildings in a square. Tours have a small fee. I learned that the first Indiana settlers were not like the first Ohio setters: New England Congregationalists given land parcels for Revolutionary War service. Instead, Indiana was settled from the South by early Kentuckians and Tennesseans. However, they supported the Union during Indiana’s only Civil War battle, in Corydon. 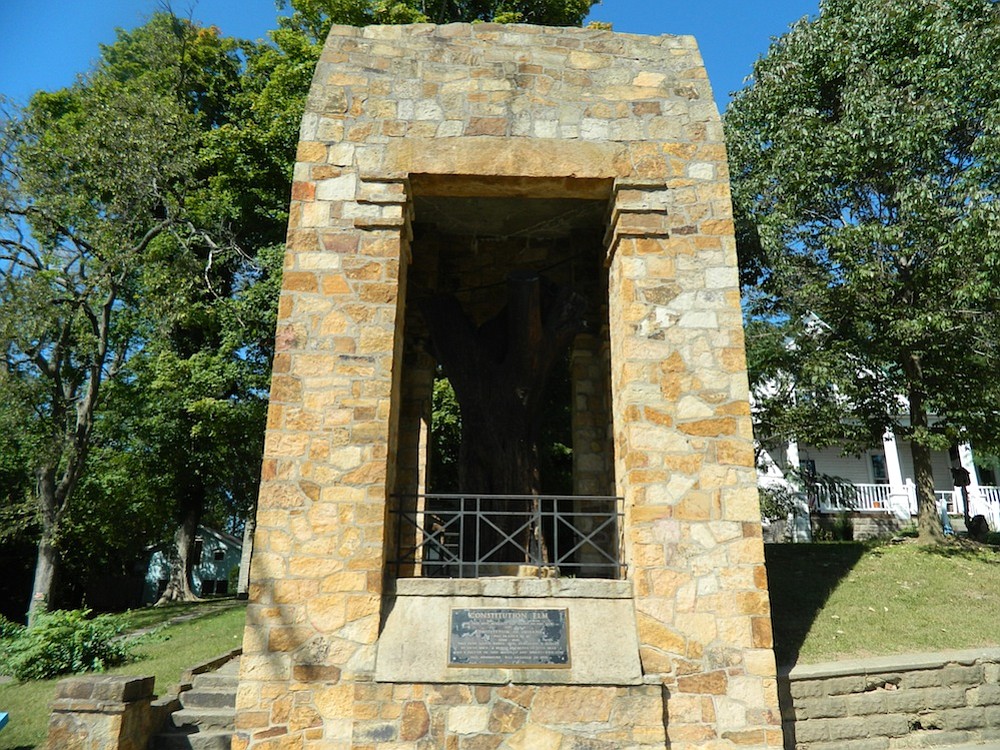 Corydon's Constitutional Elm is preserved and surrounded by this stone monument.

Much like Socrates held debates under an ancient tree, so did Indiana’s early civic leaders when hashing out the state’s constitution. Several blocks from the public buildings, on an unassuming residential street, stands an odder tourist attraction. It’s the bricked-up tree stump from that time: “The Constitution Elm”. In this era of controversial monuments, hopefully nobody will ever be offended by a tree stump.

Corydon is also the site of the Harrison County Fairgrounds – Indiana’s oldest, over 156 years old – where you can see harness racing. You’ll no doubt also find pork tenderloin sandwiches, an Indiana thing. You’ll wonder where these Fred Flintstone–size, juicy breaded tenderloins between bread have been all your life. 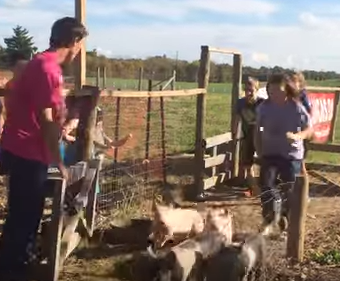 Fall’s the season for Deere Farms, which looks just like you’d imagine a classic Midwestern family farm would. There are some modern touches in this world of corn mazes, pick-your-own and pig races, though: they grow pink pumpkins to benefit breast cancer research. They’re also stepping up their food program next year, with farm-to-table goodness.

Where to drink and eat

This part of the world’s all about farm-fresh quality, not molecular gastronomy. At KentJava Bar, a young widow brought gourmet coffee drinks to town. Sure, anybody can get an old-fashioned soda at the soda fountain of Butt Drugs, but do you have what it takes to buy a t-shirt and wear it home? I did! They’ve been in business since 1952.

Mauckport officials think there are about 40 people still living in town, the rest being chased out by Ohio River floods. People flood back from all over to the Riverbottom Inn for Southern-style plate lunches Tues.–Thurs, beans and cornbread every day, and rockin’ live bands on weekends.

When I ate breakfast at Stephenson’s General Store, I felt like I had been dropped onto the set of a newly discovered Thornton Wilder play. Locals – many of whom, like in olden days, originally hailed from Louisville – talk about the community, its issues, its people. Breakfasts are simple short-order creations, but where else can you buy Lodge-cast iron cookware, locally made duck calls and penny candies while eggs are being fried?

Joe Huber’s is practically a local landmark rather than a restaurant. After you reach the restaurant/farm market/gift shop on a series of winding roads, you’re in for pure country. Simple original family recipes are served family-style to your table, as much as you care to eat.

For more gastropub-type fare, head to Point Blank Brewing Co. Their whole menu is made from scratch. They best most city places that merely chuck a frozen box of whatever into the deep fryer. The weekend I was there, their brew lines were down, devastating for a brewery! But, they have about 100 different bottled beers and cider from the region and the world – as well as cocktails – so there were no worries. For appetizers, I picked jalapeno poppers, fried pickles and Scotch eggs. It's not easy to find Scotch eggs: those breaded, deep fried hard-cooked eggs. There were different house-made dips presented for each item in the basket. The poppers were made with whole, fresh, large jalapenos. They're not super-spicy, more vegetal in flavor. They're almost like a chile relleno, they're so big! I enjoyed the good chicken-fried steak-like batter on the appetizers and they were served in a generous portion. 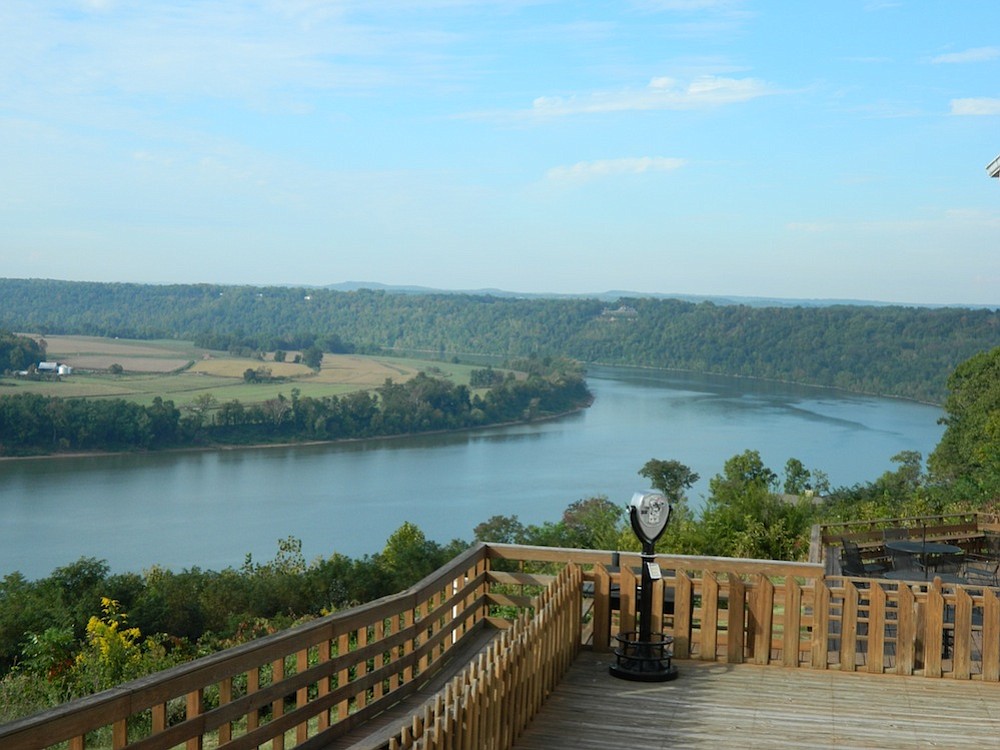 Leavenworth, Indiana’s The Overlook Restaurant only serves breakfast on weekends, but it’s been an institution since 1948. Make it an event! There's an outdoor telescope to see Kentucky in detail, plus the beautiful rolling hills of Southern Indiana. The menu is pure comfort food all the way, including eggs, biscuits and gravy, homemade pancakes with maple syrup.

The downstairs' Walter's Pub has a deck, casual menu and occasional live music. Something unexpected and wonderful at this down-to-earth eatery: they have a pastry chef (!) who graduated from Sullivan University's culinary program. Right at the counter are luscious and artistically crafted chocolates! Definitely get some for your ride home.