Good answers to a difficult questions

Will Grizzly's past bite his future? Where do you go when you die? 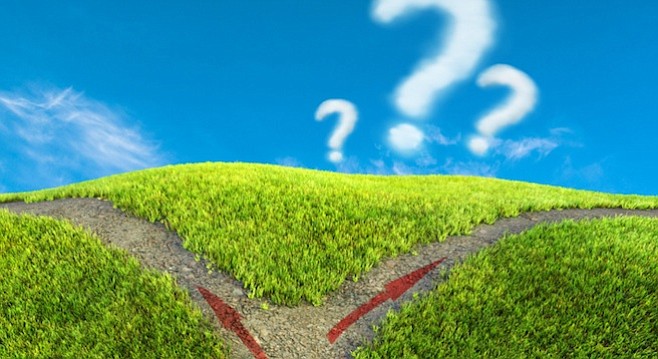 There are certain fields, including the clergy, medicine, and teaching, that are not just occupations. They are marked by a sacred calling.

Your cover story by Joe Deegan, who teaches a course in philosophy, and who has used personal and sensitive information from one of his students, Mr. Lucas Taylor, is infamous. Mr. Deegan is a low hack, a person without a sense of decency of morality. Even if Mr. Taylor consented to the public exposure of his past life, it was the duty of the teacher never to use it for his own purposes.

Re: August 27 cover story, “Will His Past Bite His Future?”

Are there no interesting people left in San Diego to interview? You have to find some self-indulgent pussy who likes to abuse women, beat people up, and rip them off? Quite a role model. I see this guy being raped on the bus to prison because he’s no tough guy.

This is in reference to the cover story published August 27, “Will His Past Bite His Future?”

I personally met Lucas face to face on New Year’s Eve a few years ago. He was nothing but nice to me, and I considered becoming one of the women to work for him. I never did, which may have been a good thing, given his criminal history during that time. I had no clue about any of his anger issues until I read this article.

It’s really refreshing to hear that he was able to turn his notable leadership qualities into something positive. I can completely relate to his inner struggle to stay clean, and on the good side of the law, as I am dealing with it myself.

Lucas, I know it’s hard to stay clean, but you are living proof that anyone can turn their life around for the better! Thank you for daring to do so, and just know that you are an inspiration to not only myself but to those that are at that crossroads in their lives. Keep it up!

Mr. Bauder, I like reading your stuff, but I wish you would raise hell with the management about the lousy job they do of printing the graphics in your articles. There’s a couple charts on page three and the darn things are practically illegible!

For God’s sake! Those things should have been at least 150 percent the size they’re printed at. It’s just ridiculous. I guess the management there doesn’t give a damn.

I mean, it’s your story, and they’ve ruined it by publishing charts that are much too small to read with the naked eye, or even with a magnifying glass. If I were you, I’d raise hell. I’d say, “Why did you fuck up my story?”

I like reading your stuff, but they’re not doing right by you.

No Need to Clarify

I am stunned that anyone who has risen to the status of receiving money writing for a popular publication, and should be modeling appropriate language for her readers, does not use language appropriately.

In her cover article of August 20, “When You’re Guilty Till Proved Innocent,” Siobhan Braun writes, “At 8:00 a.m. on an overcast Saturday morning....” Does she not understand the word redundant? Since when has there been a need to clarify a.m., as if there might be an 8 a.m. in the evening?

I liked pastor Sara Haldeman-Scarr’s response to the final question in the August 20 Sheep and Goats column. Too often the answers by others have been a literal interpretation of heaven and hell, where all people are sent to one or the other.

Since, as she says, we are all God’s children, then why would God send some of his children to an everlasting punishment? A good answer to a difficult question for many pastors.