Eat it with your gums

Amble into the Yemeni restaurant 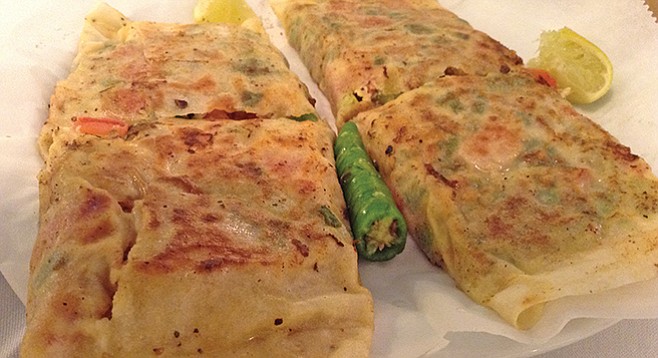 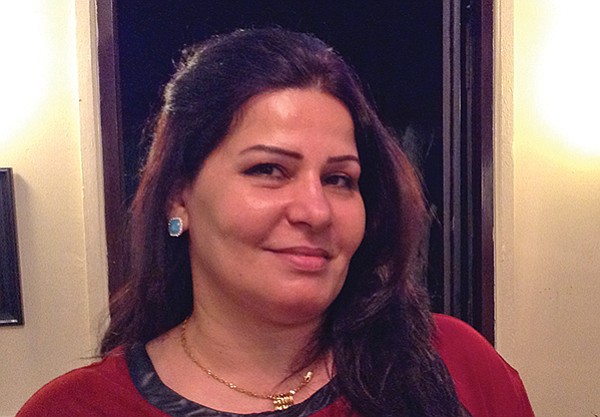 Hidden riches lie behind the plainest doors.... Tonight I’m hoofing it up ECB, about half a mile west of College Avenue. Spot that looks like a big former Taco Bell outlet, except the pole-sign in the parking lot reads, in English and in Arabic, “Hadramout Restaurant.” In the sign’s background, a floodlit fortress rises from the top of a hill filled with mud-brown houses and minarets. Now I’m interested.

Inside’s a pretty standard layout, counter and kitchen at back, bunch of tables filling out the front. The open-rafter roof has been painted sky-blue with clouds and gulls, eagles, pelicans. But through another door, they have a side patio where people are smoking shishas, drinking coffee, chatting. Another whole area inside has low settees and a sunken floor. One or two men sit with their flexible pipes snaking down to shishas on the floor.

Her name’s Asraa (it means “travels by night”).

Glance at a menu. Pretty standard Middle Eastern fare, like, foul, kebabs, samosas. Then they have chicken or lamb mandi or kabsa with basmati rice. Never heard of them. They cost $13, $14. Hmm... I sit down, check the menu. It has, like, four pages of food. 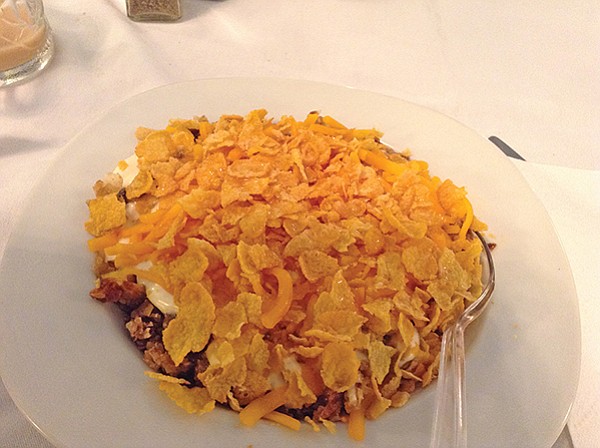 Huh. But I keep flipping the pages anyway until I come across one that’s labeled “Breakfast/Yemeni appetizers.”

This place is Yemeni? Wow. I had a grown-up cousin who used to work in Yemen, right there at the entrance to the Red Sea. The tales he told about the fabled land of the Queen of Sheba... The place they called Arabia Felix (“happy Arabia”) because it was so green and rich. It was the place where all the frankincense and myrrh came from. And, he said, the best food in the Middle East.

“Uh, this place is Yemeni?” I ask Asraa, next time she passes by. She nods, points to a wall picture of an awesome ancient-looking city. “Hadramout.”

Oh, right. Hadramout is a place in Yemen.

“Some tea?” says the other girl. “Try the Chai Adani. It is a Yemeni tradition.”

I’m guessing “chai Adani” means it comes from their port city of Aden. Whatever, it costs $2 and it is pure deliciousness. They make it with cinnamon sticks, green cardamom pods, cloves, and ginger. Has milk, comes in a glass mug, and is warm and yummy.

Hmm... At the bottom of the breakfast menu, I spot motabaq. It goes for $4.99. You get a combo of cheese, veggies, banana, and minced meat.

Then I remember: it’s breakfast; this is eight at night.

“I’ll ask the cook,” says Asraa. She goes over to the kitchen, talks, looks back, and nods.

When it comes, it’s like four small, square omelets. Inside is a combo of green onions, tomato, carrot, other veggies, banana, and a bunch of spices sexing it up. And in the middle they have a shiny green serrano pepper, pre-sliced so you can add as much heat as you want. I also add lime. It’s light, sharp, savory and with spikes of heat. Love it. (Huh. And that banana thing, just like the Somalis.) 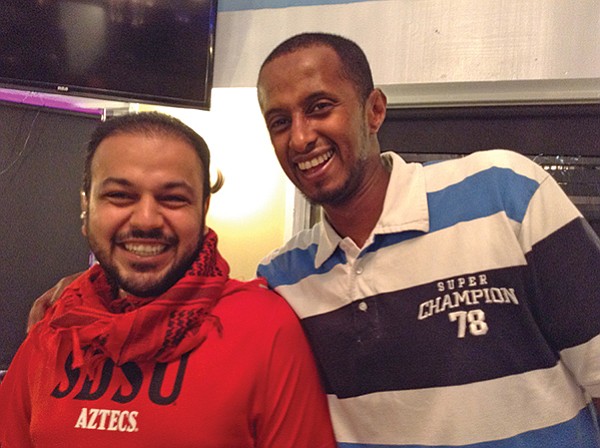 The three at the next table talk away in Arabic. The woman (Afrah — means “happy”) has a daughter who’s running around babbling a combo of what sounds like Arabic and English. Afrah and her husband Abdul Rahman are Somali, and their friend Ahmad’s from Kuwait.

It seems Yemeni traders were the key, always bringing back food ideas from places like India, Turkey, Africa.

Tonight my neighbors here are eating lamb mandi (it’s steamed and spiced all day till it’s tender enough that “you could eat it with your gums”) and basmati rice, a very Yemeni dish.

But they say that an item on the breakfast menu, saltah, is pretty much the Yemeni national dish. It’s a veggie stew in a pottery bowl with lamb, eggs, fenugreek, and other spices. Costs $8.99. Desperate to try it, but this one they only make in the mornings.

They will. And, man, Areekah? Eureka! This is sweet with the banana, cream, honey, and especially the dates, and yet savory with the cheese and the wheat pie mix.

At first sight, it’s all, uh, corn flakes. But they’re sitting on grated cheese, a whole layer of sweetish sour cream and those Arabian dates.

“This used to be a Greek restaurant,” says Abdul Savre, the owner. “I opened three months ago. I am the first. I am the only Yemeni restaurant, in San Diego or L.A. I have had people driving three hours down here. That’s how much it means to them.”

The restaurant’s name? It’s the name of Abdul’s home province Hadhramaut, which is a big chunk of Yemen.

And you talk about ancient? The name “Hadhramaut” probably comes from one of the grandsons of Shem, son of Noah, Mr. Flood himself. This is an old, old country. These guys have had time to practice their recipes.