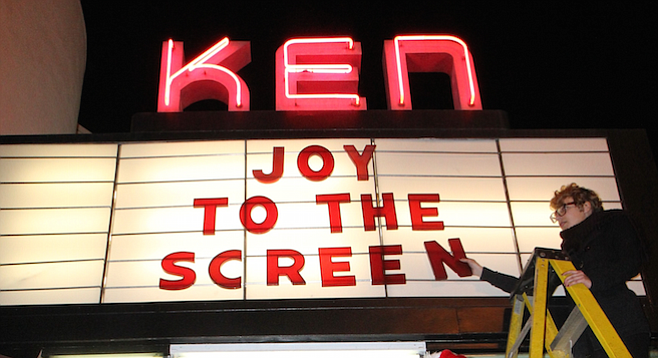 A little over a year after pouring wads of dough into building a new screening facility for the San Diego Central Library to ostensibly house their popular Film Forum program, Ralph DeLauro, series curator for 30-plus years, has been given his walking papers.

DeLauro’s reign ends on November 30, but the screening of the rockumentary The Wrecking Crew on Monday, November 2, at 6:30 p.m. will be the parting shot heard ’round the county. From Sinatra (Frank and Nancy) to Seville (David and his Chipmunks), the artists covered in the film backed them all. It has been nearly two decades since director Denny Tedescho first began recording interviews for what would eventually become TWC. His father, Tommy, was the driving force behind the elite corps of session musicians. What began as a tribute to a father from his son lives on as a historical document.

Stop by to say hello to Tedescho — he’ll be there in person to field questions after the film — and so long to DeLauro. At least as far as the library is concerned. You can still catch DeLauro’s programming finesse on display at Cinema Under the Stars.

Admission is free, but you might want to bring some cash to spend on a copy of the DVD.

DeLauro is not the only cinema servant leaving a post this month. The Ken Cinema’s manager, booth operator, corn popper, and my trusted pal, Sophia Verbiscar, is moving to Denver to project for the Alamo Drafthouse. “I am not at the point to begin sappy posts of how much this theater and working for Landmark has meant to me,” Sophia wrote on her Facebook wall, “but it should be a given to anyone who has known me for the past seven years.”

From stringing letters across the marquee for Matthew Lickona’s and my Christmas cover story to working to keep the theater from extinction, Verbiscar has been a friend to this column. There’s also none finer when it comes to grabbing a butt between shows while bemoaning the dim state of digital projection.

She leaves on November 7, so now is the time to stop in and show a little appreciation. The Alamo’s gain is our loss. I didn’t ask who would replace her. Someone will land the job — hopefully a former employee of Landmark’s recently deceased La Jolla Village Cinemas who smokes — but no one can replace Verbiscar. And always remember, there are two kinds of focus: in and out. Carry on.