North County trio has a hit with "LSD" 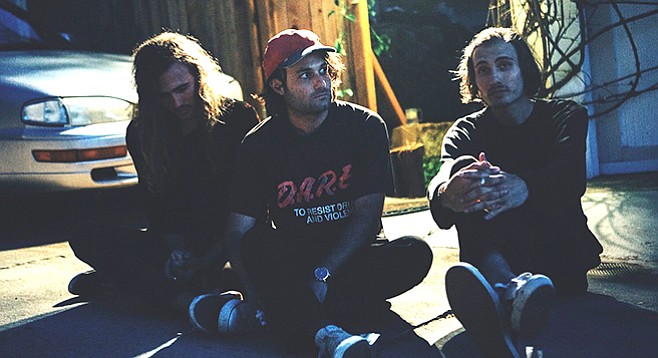 Andy Craig likes to surf. He grew up soaking in Encinitas beach bliss.

But he also needs to rock. The mellow overload caused Craig to escape to New York.

“San Diego is a good surf-culture beach town,” Craig tells the Reader. “But it’s not necessarily a good art town. People would rather be in the water than watch a show.”

Craig’s high school days in the early 2000s were spent playing in “random” bands in a forgettable pop-punk/emo scene.

“I don’t really think San Diego has a huge music scene. I always wanted to be in one. I just needed a change.”

After landing in NYC in 2009 he spent two years with psych-pop band Guards, which toured with Alt-J and Cults and played the Coachella, Lollapalooza, and Primavera festivals.

In 2013 he launched Sacco, which followed a more hypnotic groove. “I wanted to do my own music.” Sacco toured the country playing around 1000 rooms.

The last Sacco show was last November, opening for Delta Spirit, which coincidentally was also a local band that spent time in New York. That’s when Craig decided to move back permanently. “I basically moved back here for a girl.”

He then launched the Gloomies — “a synthy surf trip” — into a music scene that he says is more vital than it was five years ago.

“It seems because of the Observatory and Soda Bar there a lot more cooler, bigger bands coming to San Diego now. It seems like the scene has grown. There seems to be a lot more artist lofts in the East Village now, which I don’t remember from before.”

And he says a sort of family has popped up around the label Thrill Me Records, which has a kind of San Diego/NYC axis. Label owners Cory Stier is based here, while Gabe Rodriguez is based in NYC. Both play in the band Hideout.

Thrill Me just released the first Gloomies single, “LSD,” digitally, with a seven-inch version to follow next month.

Even though Craig has returned from the big city, he says it’s a good idea for serious musicians to experience the urban.

“Even if you move back, I think everybody should leave San Diego and get out there, especially if you were born here. I think if you never expand your horizons you’ll have a narrow outlook. If you are into art and music and you want to grow and learn, New York pushes you more than San Diego.”

The Gloomies appear with the Tops November 11 at the Hideout.