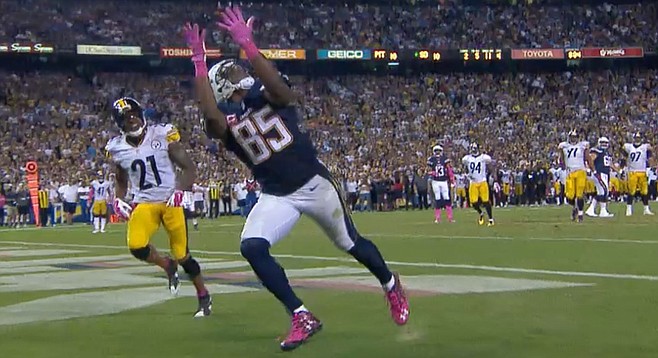 Comment by Dick Danepa, special to SD on the QT

This is about Antonio Gates. And it's about the losses. Antonio Gates sat out the first four games of the 2015 season. Suspended. For using a banned substance. During that time, the Chargers won two games. They also lost two: a 31-14 stomping from the Minnesota Vikings, and a 24-19 disappointment at the hands of the Cincinnati Bengals. Sure, they hurt — when you've only got 17 games, every loss looms large. But they weren't real Chargers losses. The kind that break your heart, then kick your teeth in for good measure. The Bengals game wasn't as close as it looked. As soon as Keenan fumbled that punt on Cincinnati's opening drive, you knew how things were going to end. Rivers' 4th-quarter interception was written on the wind.

But then Gates came back. And boy, did he bring the heartbreak. He lit up the Steelers for two scores, so that Le'Veon Bell had to bull his way to the end zone in the final seconds in order to beat us. And even that bit of bad juju relied on a stellar set-up run from Michael Vick. Up until then, Vick seemed to have forgotten he was a quarterback, let alone one of the most mobile in the league. Suddenly, we knew: Gates was back. And so were the losses.

We knew, but just in case we didn't, we had the following week against the Packers. Rivers threw the game of his life. Over 500 yards. And on that final drive, with under two minutes to play, who was there to make a one-handed grab and move things downfield? That's right: Antonio Gates. Thrilling. But also telling. Because we knew what was coming, even before it came: a batted pass with 15 seconds left to kill our hopes. Just like always. A classic Chargers crusher.

Welcome back, Antonio. We lose with you, but we're lost without you.