But, “Our teachers will blow them out of the water on the east side.” 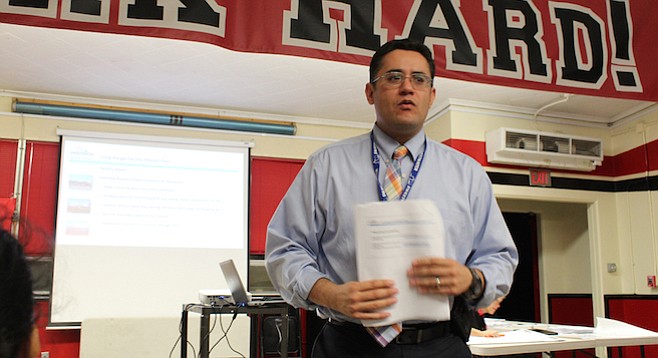 Paul Woods, director of planning and construction, explained that the Long Range Facility Master Plan (LRFMP) has been in the revision stages for the past year and a half. Once approved by the district trustees, the master plan will serve as the blueprint for building upgrades and new construction during the next ten years.

In 2014–15 the district hired consultants who estimated that $780 million in bond money is needed for modernization.

Woods also said that SANDAG projects 17,400 new housing units in eastern Chula Vista, which will generate 1500 middle-school students and 3500 high-school students. The district currently owns 27.18 acres along Hunte Parkway and construction of a new school is anticipated there.

But the majority of meeting attendees represented Castle Park Middle and Castle Park High School. They wanted bond money to be equally distributed. Community member Paola Martinez Montes said, “I think it’s really important to try to invest in an equitable way, so as we build new schools we also make sure we include all those new things into the older schools.”

Many attendees then expressed the need in both schools for new bathrooms, a new gym, a new library, a new cafeteria, the addition of a multi-purpose room, a new parking lot, and installation of air conditioning.

Moises Aguirre, assistant superintendent of business services said, “Sounds like we need a cost-benefit analysis in terms of whether we rebuild or remodel, or tear down and build new.”

Matthew Dunkle, an English teacher at Castle Park High School, said, “A lot of students choose to transfer to the schools on the east side because of their new facilities. We all tend to judge a book by its cover. I really think it’s important at Castle Park High and here at Castle Park Middle that the front of those schools are really given a facelift or whole remodel.”

Viky Mitrovich, the principal of Castle Park High, explained that her school was built in 1963. She said, “My band room — the ceiling is going inwards. I’m waiting for something to happen there after a hard rain.”

One attendee said students don’t want to drink from the water fountains.

“We got a water-filtering system in place in our back storage lab room for our biotechnology program that we have at Castle Park High School. The person who put that filtering system in tested the water quality and found that the particulates in the water were 250 parts per million higher than what the actual dangerous level actually is…. I know some of our sewage systems come back up and I know maintenance has been out to take care of that, but you can actually smell some of the gases come back into the science rooms through the sinks.”

Another community member noted the positives.

“Our schools offer Title 1 monies. You’ve got a lot of free tutoring services. Our schools offer so much more than the east side schools do. They do not have co-teachers on the east side. We do…. Parents send their kids over there and then their classrooms are packed. Kids are sitting on the floor and they’re not happy because they’ve left their childhood friends. So for any parents who think because you drive through Eastlake you’re giving your child a better education, you are wrong. We’ve got as good teachers over here and we’ve got more money to spend on our kids.”

Principal Mitrovich added, “Our teachers will blow them out of the water on the east side.” She explained Castle Park High receives a large amount of LCAP funds. They are one of the few high schools that offer an after school-program and also have a “Saturday Scholars” program.

“That’s good, but then you’ll have to go ahead and offer our kids the same things that they get over there,” a parent remarked.

To sum it all up, the tax paying community of Castle Park (and others such as Mar Vista, both Middle and High, Hilltop Middle as well as Granger and Bonita Vista High) have been SHORT CHANGED.

While on the Education side of things there has been much improvement thanks to Dr. Janney, Dr. Fulcher, Ms. Alvarez the highly respected educators and Administrators - the fact that we have seen no real change in Facilities as it pertains to quality Project Management and data gathering is troubling.

Parents, if you want change - you need to show up and speak up at the Board meetings. Time to demand the changes we were promised during the recent campaigns.

And I say again - we on the west side are fortunate to have Title 1 monies, tutoring, EXCELLENT TEACHERS/ADMIN and our wonderful students - and those are but 'some' of the positives.

Thank You Board member Segura for caring so deeply. Castle Park community, Mr. Segura and his wife so believe in the qualitiey of education of The Castle Parks that their own child(ren) attend Castle Park!

A special Thank You to Ms. Malari (spelling?) and Ms. Mitrovich - the passion they expressed for their student bodies and staff rang loud and clear!!!!!

This is a huge topic, and one needing much discussion.

It seems that for years, Sweetwater's priorities on spending bond monies were "unlisted".

Who made the decisions? Why did certain things get done and not others? Why were some schools somehow left out of the mix?

And then, when work was done, sometimes it would be a facelift--but the classrooms were still in dire condition. I would have to say that facelifts should be about the last thing on the list. We need substantive work done first, and yes, cosmetics when critical issues have been addressed.

There does need to be information on the project list, and I applaud that these meetings are taking place.

I would also like to add that it is time that some adequate pool facilities be built for these schools. Work with the city of Chula Vista. Work with the county of San Diego. Work with all public entities. Put together a package that utilizes solar power, collects rainwater, is sustainable (to the degree possible) and includes facilities for short course, long course, water polo, diving and rehabilitation. This could be something that will enhance our communities far into the future, and will benefit all of us, especially the young people.

In addition, when will Mar Vista get some tennis courts? What are the odds?

I remember Southwest High was supposed to have 3 phases, back at the beginning of all the Prop. O work. Phase 1 sat for roughly 2 years as the first contractor had issues. (SGI? Not entirely sure I'm remembering that correctly, it's been so long.)

Phase 2 was supposed to be a mini multi-purpose gym, and I think I remember Phase 3 being about the football field.

Well, Phase 1 got completed way past the original schedule, and there has been nothing else. (Well, they did get a huge pile of dirt.)

In attempting to capitalize the 'C' in Carberry Dr. Carberry was omitted from the list of professionals who have brought so much expertise and integrity to our District along with Dr. Janney.

Anne raises some good points. What I want to know is what are the board members doing from where I sit nothing. We have a new superintendent and they didn't do that on their own. The ship is still sinking.

Poor management and pet projects. Little has changed really this ban of 5 helping or doing little. Where are the audits?

The old superintendent skipped all the way to his bank and doesn't look back.

There are ALWAYS "school construction bonds" on the ballot. They always pass. But we always need MORE. Where does the money go?

I am new to this but can wait no longer being an insider to what is really going on. It is disgusting with one new member of this new Sweetwater Board. More to follow. Much more. I have connections to SD Unified, Sweetwater, and the labor unions.

I am feeling paranoid given what is at stake. Privy to the inside doings of all this and could not sit by any more. My first priority is making the education of students first and carrying the water for the union is way down the list. I have seen it at San Diego Unified. It is a corrupt system of actors. Barrera is smart and manipulative. I have seen it at meetings. This PLA thing is a Countywide strategy of making inroads in the local public construction contracts now...the recession is eventually coming and new bond programs provide the relief albeit at a higher cost than is necessary.

Stover, Carbuccia...Hall...San Diego Unified this all fits together...Take a person like Paula Hall who has never known real public life, figure out a race where the other candidates are weak, give her tons of money, and then remind her of it after the election. Have her Carry the water!! Make her feel good by making her feel more important than she ever really is or will ever be because you would bore her collegues to death. Future promises. Power corrupts. It is sad.

Much more to follow but must lay low for awhile.

Sweetwater has a dishonest principal who is trying to be a city council member when he can't even run a school. He says education is his passion, but he treats teachers like criminals and caters to the disruptive students and their parents. SUHSD has some housecleaning to do with some of their lousy anti-teacher administrators. His new vice- principal is an insult to public education and an absolute waste of an office. I pity the poor teachers who work at that school. They are investigated and reprimanded when they try to discipline a disruptive student in their classes. Teachers want to leave and retire early.