SDSU has been under-reporting campus crime 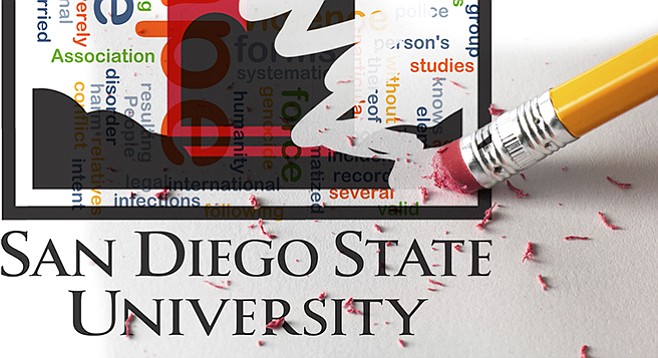 San Diego State University, rattled by a wave of sexual assaults and other violent incidents, has been under-reporting campus crime, says a September 28 audit by the California State University system.

“The process to tabulate campus disciplinary referrals for alcohol, drug, and weapons violations excluded reported allegations that had not yet been substantiated in the student judicial area,” according to the document. “U.S. Department of Education guidance indicates that disciplinary referrals are to be counted whether or not they result in a determination of a violation and sanction.” The audit did not reveal how widespread the omissions were.

In their sample of 39 crime reports, state auditors also found that “the crime log disposition for one incident was updated with a status of ‘unfounded,’ but the corresponding investigative report did not confirm that this status was valid.” According to the audit, SDSU officials have now agreed to “revise the process for tabulating campus disciplinary referrals for alcohol, drug, and weapons violations,” and “review crime log procedures to ensure proper completion of the log, including entries in the required disposition column,” by January 31 of next year.

Meanwhile, hiring of new minority faculty members at SDSU is slow going, according to the September 1 minutes of the university’s academic senate. Queried about African-American hires, the school’s provost and senior vice president Chukuka S. Enwemeka said, “the percentage is very low though there is an upward trend.”

He added that the university’s faculty affairs associate vice president, Joanna Brooks, “has a strategy in mind for recruiting in our two troublesome areas (African Americans and Native Americans). The market for such hires is very competitive as schools nationwide aim to diversity [sic] their faculty ranks.”