Bilked out of bike lanes in Coronado? 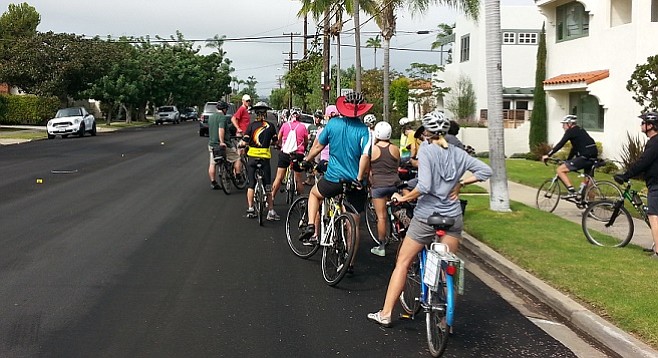 A group of about 30 cycling enthusiasts descended on Coronado Saturday morning (October 17) for a group ride to highlight and protest what they believe is an unwise decision to suspend bicycle-related improvements in the community. 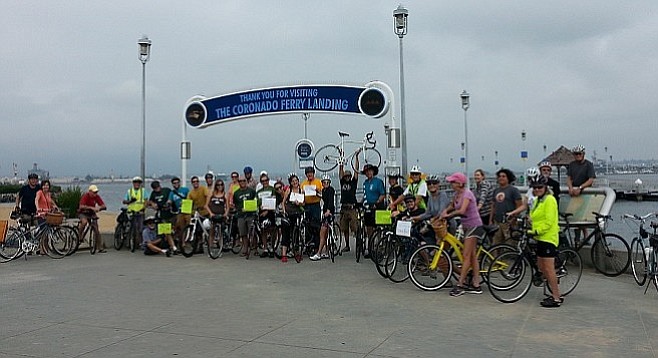 "Coronado had an approved bike master plan that they were implementing quite well — adding new bike lanes, safety enhancements, even bike parking," explains Andy Hanshaw, executive director of the San Diego County Bike Coalition. "We found these were very supportive in getting people out of their cars to meet goals of reducing traffic, increasing connectivity and mobility, and giving people choices to get around Coronado. Coronado is perfectly set up to do that, with wide, flat streets perfect for cycling."

But some residents, who Hanshaw says protested "the aesthetics of the bike lanes and how unattractive they were on the streets," convinced the city council to put the kibosh on the planned improvements. Earlier this year, locals also convinced the council to kill a $100,000 study of the feasibility of adding a multi-use bike and pedestrian path along Ocean Boulevarrd.

While the council says the bulk of commentary regarding the path was negative, about a third of the riders, including Coronado councilmember Mike Woiwode, showed up in support of continuing the bike improvements.

"What's happened as of late is that the city was doing a lot of this bike-lane striping while they were resurfacing streets, which is a very smart, cost-effective thing to do," Hanshaw continues, before lamenting the council's decision to stop adding bike improvements as part of a seven-year street-resurfacing project. "We didn't feel that was right, and we want to talk about the positive aspects, primarily safety, of bike lanes. So we want to urge the city to move forward with the plan that they've put on hold."

During a five-mile loop around the island, ride leaders highlighted improvements that included portions of the nearly complete Bayshore Bikeway, as well as city streets that have recently received new asphalt absent the planned bike-lane striping.

While cycling retains greater popularity in the relatively flat and compact beach community for riders of all ages than other parts of the county (an estimated 70 percent of children ride bikes to school and as a primary form of transportation), no plans have been announced to reconsider the striping.

I love the picture. I really do! Riding on the grass, riding abreast, pouring out into the street... it's a perfect depiction of what the radical cyclist movement wants, the roads reserved for them and to become an impediment to modern living and the freedom of anyone else to disagree with them. I hope Coronado sandblasts off all of the bike lanes and "sharrows" and reclaims the streets for people who have lives and jobs and families instead of a tiny, smug, arrogant minority.

"Radical cyclist movement" that's freakin' hilarious! Thanks for confirming there are as many dicks on Coronado as I thought...