"For a remember of Sarajevo" 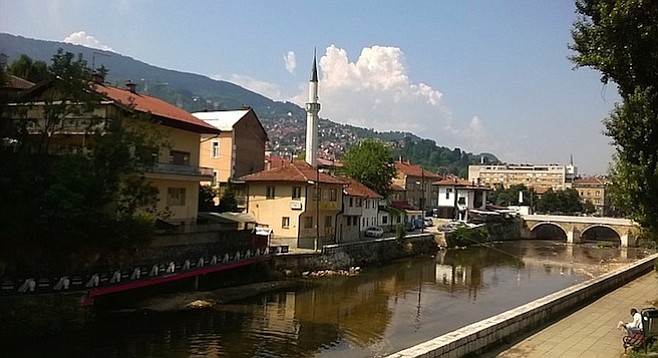 It was 38 degrees Celsius (100F) when we arrived in Sarajevo. The soaring minarets that mark the Islamic world were ubiquitous. It also happened to be a national religious holiday in Bosnia – Ramadan Bajram (end of Ramadan). This triggered some immediate questions in my secular Western mind: Are Americans welcome here? Does my girlfriend need to cover her legs and shoulders in public? Do I need to wear pants – a collared shirt? What about alcohol?

Our pension was perched on the bend of the Miljacka River, just east of the old town. The terrace had a view of the river and a hillside that was dotted with mosques. We watched people walk across the nearest bridge – one woman in a tank top and a man in shorts. The waiter brought us beer and water. I thanked god that the drinks were cold, and my first questions had already been answered: Beer will be easy to get. My girlfriend and I don’t need to worry about our wardrobe.

We sat and drank and absorbed the view. First one, then multiple calls-to-prayer filled the air – a droning wall of sound. I gazed up at those hills and couldn’t help but imagine Serbian snipers shooting at Sarajevans as I’d read about. Though I had visualized it years ago, the setting wasn’t real to me until I was there. I sipped and scanned for likely sniping spots from third floor windows, and realized that I’d never looked at a pleasant hillside and been frightened of its history before.

I could remember only flashes of the U.S. news reports on the Bosnian War in the early 1990’s. I was in high school in San Diego back then and didn’t know half the story, nor was I too curious about it, like many self-absorbed teenagers. Bosnia, Croatia and Serbia weren’t real places to me when I was 16 years old. I had no point of connection; no context.

I’d heard about the ‘Siege of Sarajevo’, but that was it. Though I’d educated myself on the topic since then, the more I stared at those hills and admitted the former blanks in my adolescent mind, the more it bothered me. 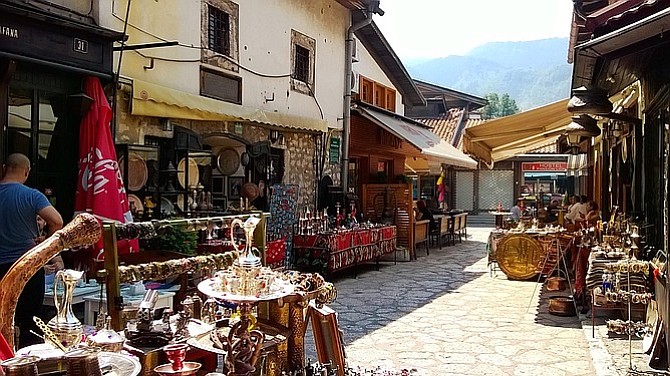 Hookahs and modern Islam in Baščaršija

After sunset, we left the room and headed toward the historic center, Baščaršija. All the action was here: packed outdoor cafes with people sitting on small Kilim stools with hookah pipes; loud Western club music bumping from inside bars; 16th century, bottom-lit mosques; a beautiful cathedral – and all of this along crowded, pedestrian-only Sarači street. Women in miniskirts and hijabs strolled with one another in perfect harmony. Young men walked arm in arm, laughing and carrying on. Everyone was out celebrating the end of Ramadan. Many were eating in garden courtyard restaurants, some smoking, some drinking alcohol. It painted a picture that Fox News-minded Americans might not be able to conceive – a completely tolerant, open, modern, peaceful Islamic society.

We soon turned off Sarači in favor of a dim, narrow path and ended up at a hookah bar. After sitting down, we found out they didn’t serve any alcohol. But with an enchanting view of an Ottoman mosque and oriental plumes of smoke all around us, we decided to stay put. Not being smokers, it didn’t take long for the shisha to take effect. I got lightheaded and dizzy in an embarrassingly short amount of time. It began to make sense why they didn’t mix this stuff with booze.

When I noticed a neon sign that advertised bus tours to the “Bosnian Pyramids,” I didn’t know if I was starting to hallucinate or what. This and my subsequent coughing fit were signs that it was time to call it a night.

Ghosts of the past

On the walk back, I looked up into the hills and focused on a bright second-story window. I cringed inside, imagining a rifle with a scope pointed right at me – images of bodies lying in pools of blood in these streets – and I couldn’t help but ask the obvious: how could this great city fall into such violence only 20 years ago?

The next morning I woke up much earlier than usual and ventured out on my own. The first thing I noticed was the colorful town hall in the daylight – an eccentric, attractive mixture of East and West. As I passed by, it hit me: I was walking the path of the Austrian archduke’s motorcade that led to his historic assassination in 1914. Gavrilo Princip, the assassin who struck just blocks away, was probably convinced that his symbolic act would lead to positive change for Serbia and the Balkan region. Like most well-intentioned acts of violence, it backfired. The assassination ended up triggering the dominoes that sparked World War I.

I continued my walk through Baščaršija. The cobbled market streets were all opened up during the day, like bazaar in Istanbul. Rows of small silver coffee cups glistened in the sunlight. Vibrant pottery, Turkish carpets, and touristy trinkets were all on display. Old stonework, domes and minarets brought Sarajevo’s Ottoman past to life. It was hard to believe that most of these buildings had been recently destroyed. And, right then, my fascination with Sarajevo made sense: it was if this one city embodied all the tragedy, hope, and varied potential that our global civilization faces.

Less than an hour later, I was handing over the keys as we left the pension. The receptionist smiled as if we knew him, stopped us and presented me with a royal blue coffee cup with the Bosnian flag on it.

“This for you,” he said, “For a remember of Sarajevo.”

On any other occasion I would’ve laughed inside, but my war-racked imagination didn’t let me. I gave those haunting hills one last look. My head was swirling with disturbing questions about what it meant to be a traveler in such a place. But one thing was certain: I would always remember my time in Sarajevo – and not because of the free coffee mug.