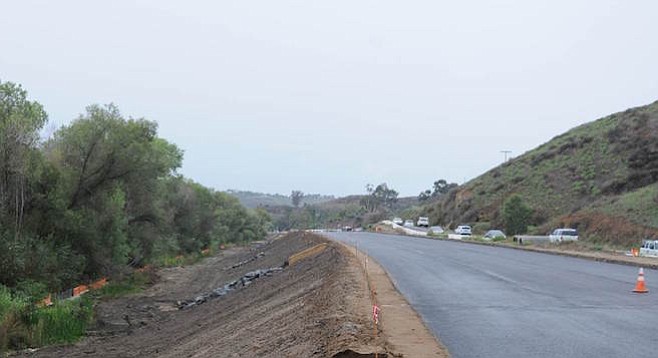 Motorists driving the curvy, two-lane Highway 76 from Bonsall to I-15, with 20,000 fellow travelers per day, will soon see a light at the end of a traffic-nightmare tunnel. The old road, built in the 1950s era, is often a slow-moving parking lot.

Caltrans project leader Karen Jewel says that with much of the grading complete, crews are starting to pave, at night, what will become new eastbound lanes from Mission Road to Via Monserate.

“Later this month, the traveling public will be switched to those lanes, striped for one lane each direction,” said Jewel.

Construction and grading will continue in other areas closer to I-15, with the entire project expected to be completed by December 2017.

Beginning 19 months ago, Caltrans clear-cut a wide strip — up to 200 feet wide —for the road’s new alignment along the northern bank of the San Luis Rey riverbed. In some areas the brush was so thick, humans had not been able to traverse the area in decades. So, did Caltrans find anything of interest?

“The archaeological monitor found an old Native American pestle [used with rock mortar bowls],” said Jewel. Also, the contractor dug up an old disc plow from a nearby farm.

In the 1970s, state highway officials planned an interstate-type highway, similar to what was then being planned for Highway 78 from Oceanside to Escondido (replacing surface-street travel on Vista Way and Mission Road).

In 1988, voters were asked to approve a half-cent transportation sales tax, with Hwy. 76’s widening one of the main projects proposed. The road-widening never happened.

In 2004, voters were asked to reaffirm the sales tax for another 40 years. Transportation officials had to heavily campaign North County voters who were skeptical after having been promised an improved Hwy. 76 that was passed over for other projects. The measure barely passed with just over 50 percent of the vote.

With continued growth in southwestern Riverside County, the addition of a large satellite campus of Palomar College and five new residential neighborhoods planned for the northwest corner of I-15 and Hwy. 76, along with increasing traffic to four nearby casinos, Caltrans projects daily traffic volume along the highway will reach 46,000 vehicles by 2030.

The $201 million project is the final six-mile phase of expanding into a four-lane divided highway on the heavily traveled corridor from I-5 to I-15. Within most parts of Oceanside, Hwy. 76 motorists enjoy six lanes, but also contend with many traffic signals into large shopping centers.

The only section that was built as a freeway-style highway is a short, one-mile bypass over the busy intersection of El Camino Real at Mission Road. Longtime locals still question why there were no exit ramps planned for access to the area’s two busiest roads.

"Longtime locals still question why there were no exit ramps planned for access to the area’s two busiest roads."

Why? Probably because building on-ramps and off-ramps would have required the tear-down of numerous businesses and other properties, including an elementary school, near El Camino Real and Mission Road.