If true, Union-Tribune will also likely have new owner soon 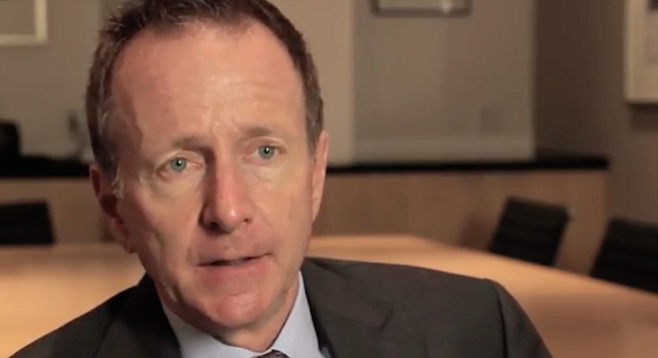 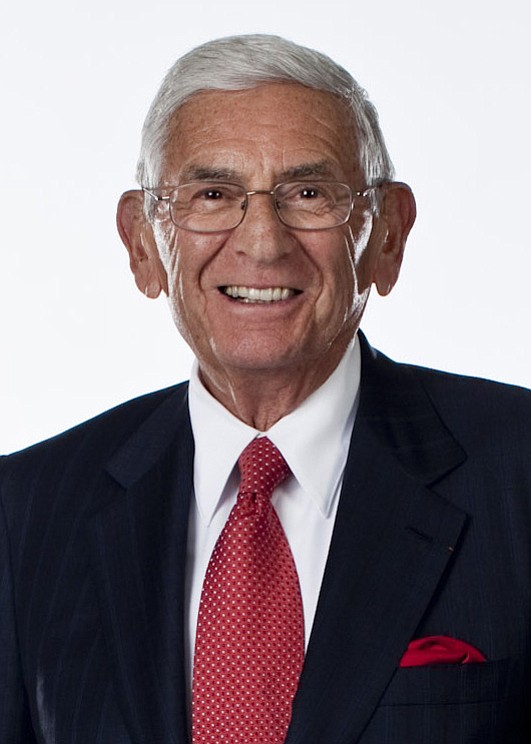 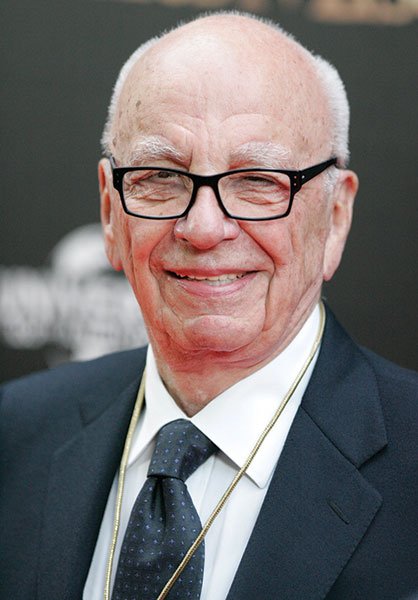 If that scenario unfolds, this would almost certainly mean that the Union-Tribune would go with the Times to Broad and his L.A. colleagues. The L.A. Times contingent and Chicago's Tribune Publishing headquarters have been feuding publicly; U-T management has taken the side of the L.A. group.

Murdoch's tweet is believable because of the feuding, as well as Tribune Publishing's poor performance.

The U-T was owned by Copley Newspapers for many decades. In March of 2009 it was sold to Platinum Equity, a private-equity operation based in Beverly Hills. In November of 2011, the paper was sold to real estate developer Douglas Manchester. In May of this year, it was bought by Tribune Publishing.

Murdoch didn't say it, but it's likely the publisher of the U-T would become Austin Beutner, who was fired earlier this year by Tribune Publishing.

If you think that the reporting of news was slanted/manipulated/doctored under previous U-T owners, just wait until Eli Broad is pulling the strings. Now, with no printing plant of its own, the U-T is just an appendage of the LAT. There's zero chance that it can be independent again, regardless of who locally might like to buy it. The paper will shrink more, and have even less credibility than ever.

Visduih: I am afraid yuu are right. Eli Broad has several agendas, and he will use the paper to push them. If Beutner returns -- quite likely -- he will be a servant to Broad. The Union-Tribune will be beholden to the big bucks in L.A. Not a pretty pictue. Best, Don Bauder

What are Broad's agendas?

One of his favorite hobby horses is charter schools. That's also known as teacher-union-busting. But if you like to know where your tax dollars go, and have some political control over that, charter schools are not the answer. As currently operated they are accountable to nobody, and can pervert the notion of school attendance freely.

Flapper: He is an advocate of charter schools. But then, so was the U-T editorial page under the Copley regime. Best, Don Bauder

And Buzz Woolley(Girard Foundation) and his Voice of San Diego...

Paper trail. I do not know enough about the Voice's coverage of education to comment. Best, Don Bauder

can't be worse than past ownership ... much better off with Broad, Beutner & Co. any day over Murdoch, Papa Doug, Platinum or Copley ...

jv333: It's amazing how many old-time U-Ters yearn for the "good old days" under Copley. Best, Don Bauder

Eli Broad is one of a bunch of self-made billionaires (Jacobs, Gates, Walton, Bloomberg, others) who support charter schools. Charter schools are publicly-funded public schools loosely accountable to the district or state that charters them and to their own federation.

Charter schools usually (though not always) have no teachers' union -- or encumbering union rules that uniformly determine teachers' economic status but have no relation to the academic status of students in classrooms. In general, charter schools have a record of mixed academic success -- no different from the traditional public school system's track record anywhere.

Some local charters are academically demanding and serve first-time college candidates such as UCSD's Preuss School. Some are organized along lines of business-style project-based learning like High Tech High and its middle schools. Some are foreign language-immersion schools like Einstein Academy. Others, such as Gompers and O'Farrell, draw students from poor communities of color, enjoy charismatic devoted leadership and deep support from parents who are grateful to have their kids in an attentive, orderly, caring, academic environment.

Some charters have failed because of financial mismanagement, or for other fiscal reasons -- such as one sponsored by our own SDEA teachers union and one formed but never launched by the San Diego Chamber of Commerce after seed-money was spent.

The problem with Eli Broad as a publisher is not his support for charter schools, but his known autocratic personal style, lack of newspaper experience and possibly cavalier attitude toward the notion of respect for independent journalism.

I heard a joke this afternoon that newspaper obituaries are now called "subscriber countdowns." I hope to see SoCal civic honcho Eli Broad publishing the LA Times and the Union-Tribune rather than the rapacious Tribune Company out of Chicago. The waiting is excruciating and I hope the sale happens soon. The charter school thing is a a red herring.

monaghan: You make some good points, but Broad and his coterie have to face a difficult problem: the printing of the paper in L.A. is not working. Readers are complaining loudly. Best, Don Bauder

Your comments regarding charter schools are generally correct. But they are also based on charters working as we were assured they would work. Your calm comments, as opposed to mine, do cover the topic well.

Just in recent days, there has been a proposal floated to "cure" the ills of the LA Unified School district by converting EVERY school in the district to a charter school. If you think that will do anything positive for 90% of the students in that dysfunctional district, I have some investment products I'd like to sell you.

Visduh: The objective of charter schools is to break teachers' unions. That is bad policy. We lose too many good teachers now. If the union is smashed and teacher pay goes down, education will suffer even more. Best, Don Bauder

We seldom cavil with esteemed financial writer Bauder, but the original objective of charter schools was to prevent fed-up voters from passing vouchers -- an idea born of public dissatisfaction/desperation over declining public education quality which continues today.

Vouchers would have taken public tax dollars and dispersed them to any fly-by-night or even private or parochial school that put in for the funds. Voters rejected extreme vouchers but okayed charters. Charters were to be a middle way to prevent wholesale dismantling of the public school system.

Charter schools tend to be non-union, student-centered, communal in feeling and enjoy strong parental support. Maybe that's why Eli Broad is interested in financing a raft of charters in beleaguered Los Angeles.

It's the California Teachers Association, the most powerful lobby in Sacramento, who says charters are designed to break unions. At present, public school teachers' unions have a contractual lock on teacher hiring, firing, school and classroom assignment, work hours, compensation and standards for teacher dismissal.

Unionized California public school teachers have had a quid pro quo going for years: highest salaries in the country in return for largest class sizes in the country -- compounded by California's rock-bottom per capita education spending per child. It provides a living for teachers, but the result is a lousy education for most children.

monahan, you are so temperate with your posts nowadays. I'd like to quibble a bit. Yes, charters were conceived as an answer to the pressure to allow vouchers. But while the voucher deal was on the ballot, I recall that the charter school laws were legislative. As such, it was a hastily drawn law that has many flaws. But the passage of the law helped defeat the voucher initiative in 1993.

The concept of the charter school might be a good one, but as they now operate in California charter schools receive little or no scrutiny from elected bodies. Most "send a bill" to the state based on their attendance, or what passes for "attendance" in them, and the funds are handed over with no questions asked or strings attached.

As I've mentioned repeatedly, the chartering districts are supposed to provide oversight, and I can't think of a single district that really does that. So much for legal requirements.

Many charters may be, as you say, "student-centered, communal in feeling and enjoy strong parental support." But that doesn't mean that they are properly run, well-managed financially, or really accountable to anyone. In too many cases, popular ones have hidden agendas. One here in No County has enabled large-scale white flight from one of the old and established high schools.

You refer to the "fly by night" schools that could have lapped up voucher funds. Well, I hate to tell you, but many of these charters can be best be described as "fly by night" too. They secure charters from small, rural districts with the understanding they will not take any enrollment away from the chartering district, Instead the school pops up many miles away, even hundreds of miles away in an urban area, and starts to peddle its snake oil claims of academic innovation and excellence. Far too many parents just lack the smarts or time or interest to ever make sure that the schools' promises are kept.

visduh. The solution to a crisis begets another crisis. nothing new there.Best, Don Bauder

This "peripheral" issue needs to be resolved, especially between the two discussants.

Flapper: Is this a peripheral issue? Best, Don Bauder

Monaghan. I realize that you are an expert in education. My view is that, generally, teachers are overworked and underpaid. Best, Don Bauder

So what do Broad and Beutner add up to?

Flapper: Broad and Beutner add up to San Diego becoming a suburb of L.A. even more than it is now. Best, Don Bauder

Flapper. It has been worse...under Manchester, for example. Best, Don Baude

Miriam Raftery: It is a sad situation, but it is an opportunity for your East County publication. Best, Don Bauder

Refreshing that Raftery would not be self-promotional. So I will:

Flapper. East County has historically been a graveyard for media. Best, Don Bauder

Beautiful flowers can pop up in graveyards--IF you can keep the G()[email protected]"'#d mowers off of 'em.

Flapper. And keep the zombies from trampling on them. Best, Don Bauder

If you don't believe they are real, notice that they won their case against a deaf man that tried to escape them.

Why? Why read when you can watch the news on Al Jazeera TV.

Ponzi: You can read the news online, too. This is a big problem for metro dailies. Best, Don Bauder

Some newspapers are attempting to adapt.

MARKET IGNORES TRIBUNE'S DENIALS. Tribune Publishing has denied that it is negotiating to sell the company, but the stock market doesn't seem to believe the company. The stock rose almost 10 percent Monday, the day of the denial, and today (December 1) is up another 5.5 percent in trading at mid-day. Best, Don Bauder

"Buy on the rumor, sell on the news" would have been an excellent tactic for the day-trader here.

Visduh. Yes, the stock zoomed despite the denial. This is a mystery. Best, Don Bauder

The world is run by mushy minds that lay on the lash in response to any attempt a rational discourse. Come to think of it, it isn't very popular among "solid" minds either.