What do you name your kid when hyphenation doesn't cut it anymore?

Rear the children with pride and patronymics 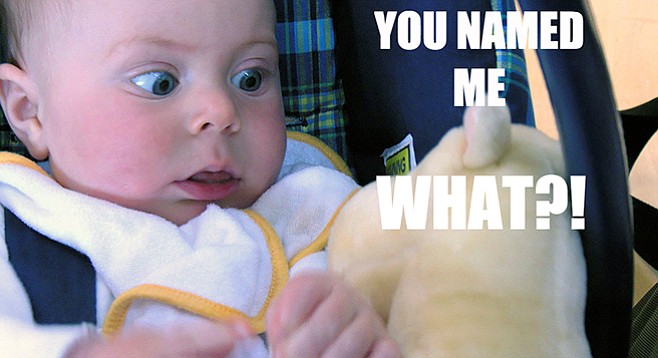 My wife and I have been talking about having a kid, really just kicking the idea around more than anything else, and I was surprised to find out that she is absolutely, 100% committed to hyphenating our potential future child(ren)’s name(s). I cared not a whit when she didn’t want to take my name at marriage. I even figured it would help dismantle the patriarchy a little bit...I went to a radical feminist college...what do you want? But something about hyphenating the future Anonymous Jr.’s last name just seems like a bad idea. On the other hand, I don’t want that either my wife or I have to “give up” a name. It seems like a no-win situation to me. What’s the cool, hipster way out of this one?

If there’s one thing to be said for hyphenated names, it’s that they reduce online identity confusion to nil. Of course, that’s a problem unique to the past decade — soon to be a problem of the past, as search engines and social media get better at figuring out exactly who we all are.

On the one hand, it’s very hipster to defy convention, and I applaud your wife’s desire to buck patrilineality, even if just for the sake of doing so. When you think about it, growing up with your dad’s last name is about as mainstream as it gets.

On the other hand, sticking it to the man by hyphenating your potential child’s last name is like embracing alternative music by wearing an R.E.M. T-shirt, by which I mean you’d be totally hip in 1983...not so much today. Dig? Today’s hipsters have moved way beyond mainstream counterculture. Tattoos and piercings haven’t been edgy among hipsters since bros adopted the tribal armband as their flag of war. Riding fixed-gear bicycles instead of mainstream derailleur’d models merits only vague hints of hipstertude.

If you want hipster points, you’ve gotta do better than a hyphenated name.

For some hipsters (the same ones who have adopted ironic Betty Crocker visions of domestic homelife bliss) it’s so mainstream that it actually has a retro appeal. I daresay a significant subset of hipster women think it’s “cute and old fashioned” to take their husband’s names and rear the children with pride and patronymics. Other hipsters procreating in the 2010’s turn increasingly toward scrapping both parents’ names in favor of a combined name, a sort of portmanteau supername that combines elements of both parents’ names. Parents hate it (“What was wrong with our name?”), but it leaves room for glorious creativity comic effect. I would love to be a fly on the wall when John McSweeney and Patty Quackenbush sign the birth certificate for little Clarence McQuackney.

But if you really want to corner the market on being over it in regards to convention, consider an ironically long name in the tradition of the Spanish gentry. Did you know Pablo Picasso’s full name was Pablo Diego José Francisco de Paula Juan Nepomuceno María de los Remedios Cipriano de la Santísima Trinidad Ruiz y Picasso? All the world’s conventions are, after all, purely arbitrary, so why not point that out with something so maddeningly cumbersome that nobody could possibly take you seriously?