Yellowfin tuna count back on the rise 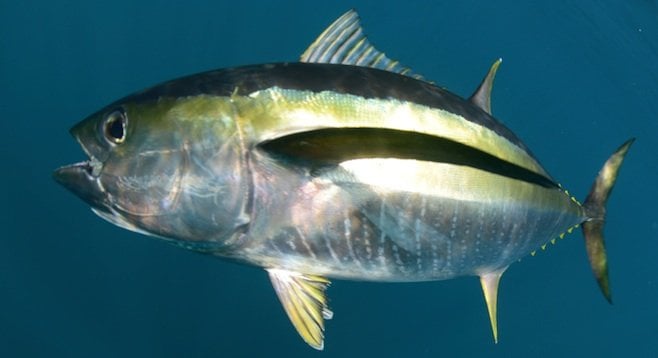 Inshore: Big winds early in the week kept the fleet off the water for a bit and had anglers hoping it didn’t signify a big change in the seasonal fishing as the first big blow in late autumn will usually do. Even so, by the end of the week extended ¾-day trips were finding yellowfin tuna willing to bite. There are still a few yellowtail and an occasional white seabass being caught off the kelp edge, but the main action inshore is rockfish, sheephead and whitefish. Calico bass and sand bass have slowed down a bit, though they should pick up as the tide swing strengthens. The hoop-netters are scratching away at the lobster, averaging 1 legal out of 10 raised.

Outside: The boats getting outside are finding schools of yellowfin tuna in the 15– to 45-pound range along with occasional spots of skipjack. The yellowtail counts have dropped a bit and a couple bluefin tuna are still being caught. Those finding the warmer spots of water further out are also catching dorado off paddies or with the yellowfin schools. With spots of warm water still out there I wouldn’t count out the glamour fish just yet, but this past week not one wahoo or marlin was reported caught by the San Diego sportfishing fleet.

Baja: The Baja 1000 was running this past weekend in the northern state of Baja and many anglers opted to watch the race instead of wetting a hook. On the northern Pacific side, those that got out on the water found idyllic conditions and good yellowtail action from just off the coast to the offshore banks. In most of the Cortez side of Baja, the winds blew and the fishing just wasn’t happening, though a few big roosterfish, a blue marlin and a couple sailfish were caught by those that made it out of La Paz. Offshore banks out of Cabo are producing occasional marlin, yellowfin tuna to 200 pounds and wahoo to 50 pounds.