From Russia, with love 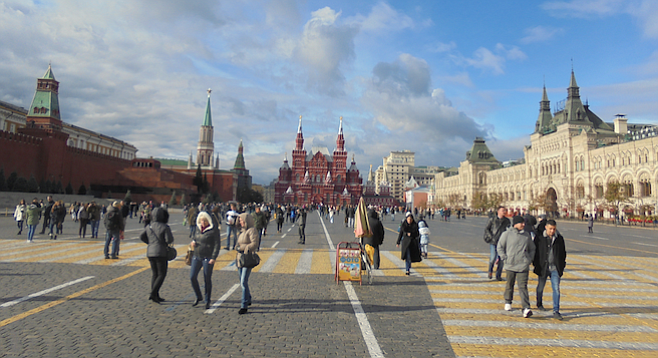 When traveling abroad, it's often our first distinct taste of the foreign that uniquely heightens our senses. For me, it was entering the hustle and bustle of a Moscow subway station and hearing the alien sounds of Russian through the public address system. As I descended the steep escalator, and because I understood absolutely nothing, I imagined the announcements as propagandistic Orwellian Doublespeak.

I noticed the uniformed guard in the booth at the bottom of the escalator. Former Soviet Thought Police?

Yes, my American mind was clouded with preconceived notions. It was hard for my girlfriend to comprehend where I was coming from. She grew up in Moscow in the 1990s. I’d grown up in Southern California during those final heated years of the Cold War. As a kid I watched Rambo II, Red Dawn, Rocky IV, and had seen countless Russian bad guys in James Bond movies. President Reagan described the Soviet Union as the “Evil Empire” and the media concurred by painting a stark, cold picture of life in Russia.

“What propaganda do they keep repeating over the speakers?” I asked.

“They’re just reminding people to be nice and polite to elders,” she said.

My Cold War–shaped mind began to thaw even more when we entered our subway waiting station. It looked more like a grand, elegant theatre entrance than a metro stop. Gold-plated ceilings, crystal chandeliers, fluted columns, marble sculpted walls. It was stunning.

We hopped on the train and sat near a group of teenage boys who were being teenage boys. They touched and pushed each other, adjusted their hair, alternating between deep and high-pitched loud voices. Unaware of my intensified evil eye, they all pulled out their phones, sat down, and became silently enthralled with their screens. It was as if they were suddenly on Prozac. It was only then that I noticed that half the crowded subway car was staring down into their hand-held, touchscreen products, looking rather satisfied and sedate. Even a feeble gray haired man – old enough to have attended one of Stalin’s speeches – gazed into his iPad.

As people got on and off, noticeably exhausted at rush hour, I began to lose that foreign feeling – that sensation of being dropped into an entirely different matrix. Instead, I began to feel that, with the exception of the language, Russia was surprisingly much more similar to America than the media might want us to think. 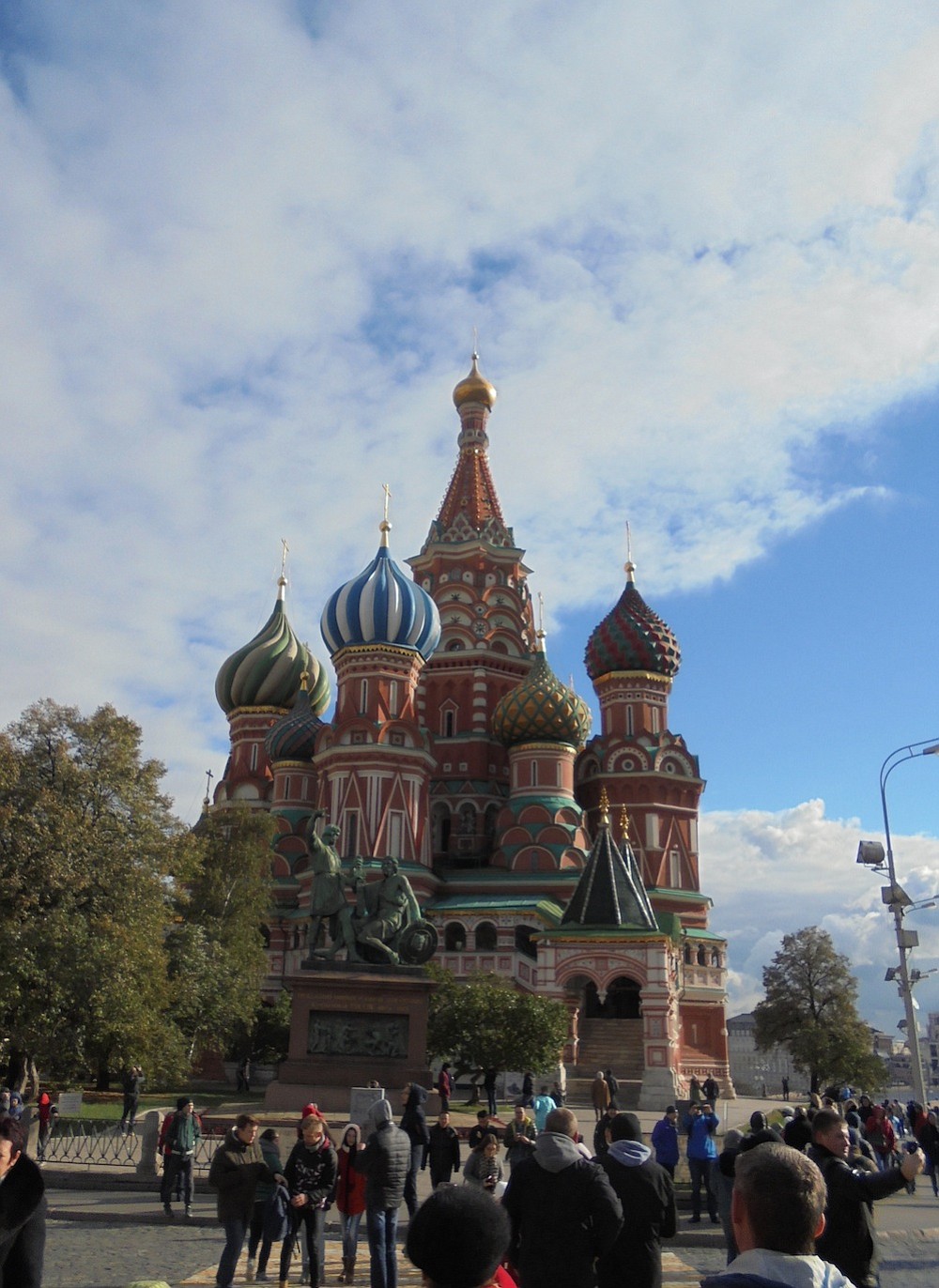 Preconceptions overcome (of sunlight, and other things)

Since I’ve already made reference to Rambo and The Matrix, please allow me to appear somewhat educated for a moment. In Plato’s Allegory of the Cave, a man has been bound and forced to see only the shadows on the wall that the puppeteers want him to see. He is eventually liberated and realizes that his experience has been manipulated. When he emerges from the cave, the truth is almost too much for him to bear. As such, when I emerged from the next Moscow metro station, I began to see Russia in an entirely new light. Literally.

First of all, the sun was shining. For some reason I’d always imagined Moscow devoid of any color, including sunlight. (Stupid? Yes, I know.) Illuminated or not, Red Square is a vibrant, impressive setting. The grand, classic buildings are brightly painted, the dimensions are massive, and colorful St. Basil’s Cathedral looks like something out of a fairytale. We walked along the Kremlin walls through Alexander Park, a well-groomed garden with statues of famous dead Russian leaders. It reminded me of similar monuments in Washington, D.C. Indeed, every country builds monuments for its best leaders. Perhaps out of respect, certainly in an effort to glorify its own past; to foster pride and patriotism in its citizenry. The eternal flame of the unknown soldier also reminded me of Arlington, and Paris, and for that matter, any nation that has lost thousands – or millions, in Russia’s case – of lives in war.

It made me wonder which is more inane: the kind of extreme nationalism that leads to so many young men dying, or thinking that the sun never shines in Moscow?

We continued our walk to Arbat Street, which felt much more like an American consumer pedestrian street than the heart of a once communist empire. There were international restaurants, bars and coffee shops of all kinds, and a few furry costumed characters dancing around, advertising their products. Contrary to rumors, McDonald’s was open. There’s even a Shake Shack!

People strolled and held hands, others walked as they stared at their handheld devices. Indeed, consumer capitalism, globalized techno-culture, and peace-loving harmony were all buzzing along Arbat Street.

And why would I expect anything else? After all, the Soviet Union has been dissolved and Russia opened up for a quarter of a century. However, because much of recent U.S. rhetoric and editorializing has been reminiscent of the Cold War, tensions and myopia seem to have re-emerged. The Russian president, Vladimir Putin, has been demonized for his involvement in Ukraine, his annexation of Crimea, his general defiance toward the U.S., his recent stance on Syria – and all have led to an anti-Putin frenzy in the Western media. Aside from well-deserved criticisms of Putin himself, this kind of blanket perspective tends to paint an entire nation in broad, simple brushstrokes devoid of nuance or variety. It evokes mainly negative impressions of Russia as a whole; most are undeserved. (I'll return to President Putin later.)

Moscow, in general, reminded me of New York City. It brought to mind Gotham City’s imposing concrete testaments to modern industrialization. Fast-paced pedestrians filled the sidewalks. I noticed an abundance of souvenir shops, too – the kind I usually avoid. But, as most tourists, I couldn’t resist. The fake Faberge eggs, matrioshki, and tacky refrigerator magnets were predictable, but the miniature bust of Putin – next to Stalin and Lenin – was not. Even my girlfriend was surprised. “He’s popular with many,” she said, “but this is making him an icon.”

Only five feet away was the T-shirt section that had satirical images of Putin hunting, doing martial arts, and holding an AK-47. It became clear to me that, within Russia, the man has many fans as well as opponents.

Whether by direct order or not, the few cases of Mafia-style assassinations of political opponents does only harm to Putin’s reputation both at home and abroad. Though Putin has been labeled a tyrant by his detractors, his supporters cite that he has made Russia economically stronger and stands in contrast to his weak predecessor – Yeltsin – who became a poster boy for drunkenness, cronyism, and kow-towing to Western interests. Some Russians who criticize Putin do so on the same grounds that the Western media does: highlighting his aggressive foreign policy, close-minded opinions (on homosexuality, for example) and his ridiculous shirtless photos on horseback. The major difference is that Russian views tend to be much broader and balanced by his successes. 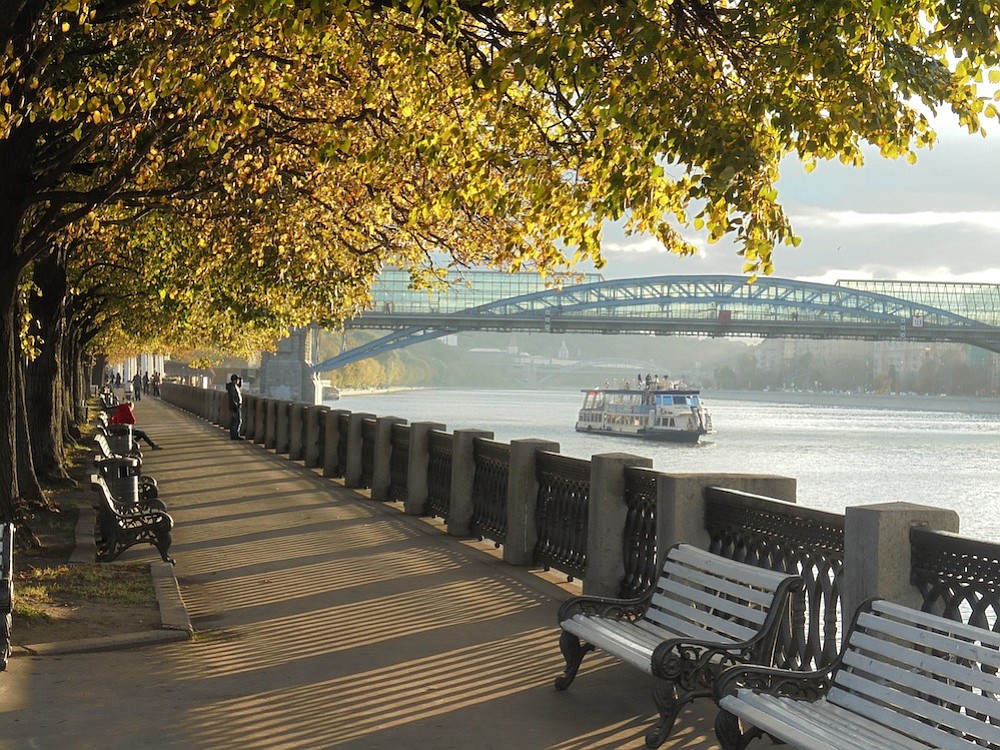 Not your typical Moscow image: following the Moskva River towards Gorky Park. (While listening to "Wind of Change.")

Out of the cave

Here – right alongside our mutual addiction to touchscreen devices and tasty cheeseburgers – we have another striking similarity between Russia and the United States. (And for this one, readers might have to brace for the same shock that Plato’s cave-dwelling friends once felt.)

If we look at the last 25 years of post-Cold War foreign policy history, you could say that the USA is guilty of the exact same offenses Mr. Putin has been criticized for, only Washington has committed these crimes on a much wider scale. Violating the sovereignty of independent nations, dropping bombs on Middle Eastern countries, "bullying" diplomacy, and unintentionally killing civilians in the name of “broader national security” have become commonplace in U.S. foreign policy. Referring to drone attacks, airstrikes, “enhanced interrogation techniques” (torture), and “collateral damage” is so standard in the media that many Americans do not question it, or criticize these shameful euphemisms. From Panama City to Baghdad, international acts of aggression are offenses that every American president is guilty of, yet we hypocritically demonize Putin for exerting the same type of force and bold attitude abroad. Believing we are the exception, we do it in the name of spreading freedom and democracy; stabilizing and protecting. Ask Iraqis and Afghans how this is working out for them.

I started writing this all down on a train outside of Moscow. A Russian woman from Boston – an American citizen – happened to be sitting across from us, heard us speaking English, and chimed in.

“I live in Boston,” she said with a thick accent. “I’m just here visiting my family.”

She asked me about how I obtained a travel visa because she wanted to talk about travel visas.

“It’s so difficult and expensive now because of all the problems between Russia and the United States.”

She was right. It had recently become a much more expensive and complicated process. She complained that her sister in Moscow was denied a U.S. visa to visit her in Boston, so she had to fly to Russia.

“It’s a shame,” she said. “I lived through decades of Cold War and now this. I thought it was over. I thought we could all be friends, but I guess not.”

Apparently it’s easier to revive distrust and old stereotypes than work to eliminate them and start anew.

The next day, on the metro back to Sheremetyevo airport, the familiar glared at me from across the aisle: an older man with a newsboy cap scrolled on his Kindle, right next to the Rihanna-blaring head phones of a hip-hop inspired Asian teen. I could have been in London, New York, or San Diego. I looked at my adorable girlfriend, sitting there, straddling her suitcase. I realized that there might be some minor obstacles in our relationship created by language and culture, but that love and understanding would ultimately trump them. We have our own little world, but we also have to function in the bigger one. Going into the trip I’d expected so many differences between our native countries, but I found the opposite.

After doing the familiar drill at airport security – taking off my belt, shoes, and emptying my pockets into the bin – it became even clearer to me.

With looming threats of terrorism, climate change, and economic collapse, it will be crucial for Russia and the United States – both developed, prideful and powerful – to find common ground and work together on imminent global issues; to develop trust, understanding, and move forward based on real commonalities rather than imagined differences. The bitter alternative to this might prove disastrous.