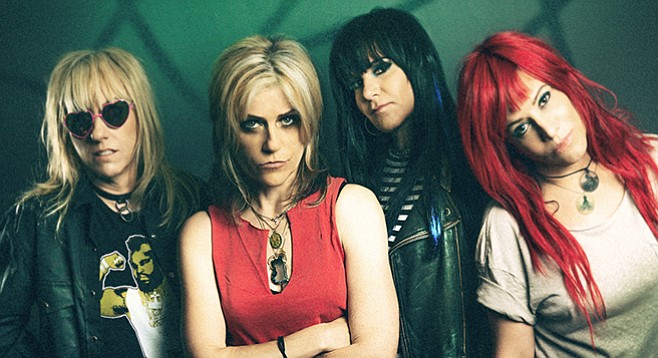 L7, the loud and raunchy female quartet featuring guitarists Donita Sparks and Suzi Gardner, bassist Jennifer Finch, and drummer Dee Plakas, formed in 1985, broke big in 1992, broke up in 2001, and reunited last year with all of the original members. They play the San Diego Music Thing on Saturday, November 14. Ms. Sparks took a walk down memory lane with me... 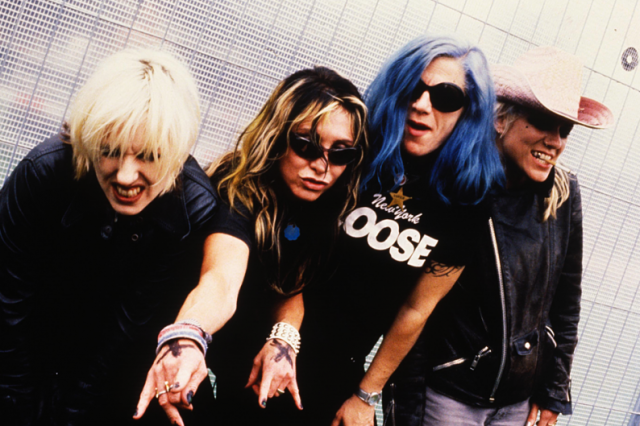 What were the band’s best experiences in San Diego?

“Well, so much is a blur, but we played the Casbah a few times. Those shows were always crazy and a blast.”

What are your favorite L7 albums and songs, and why?

“I like all of our albums, though I don’t listen to them and I don’t have a favorite. Live, I like our most popular songs because the crowd goes apeshit, so it’s contagious fun to play them...‘Shitlist,’ ‘Fast and Frightening,’ ‘One More Thing,’ ‘Monster,’ etc.

“On record, I like a lot of ‘deep tracks.’ ‘Me, Myself, and I’ is a track that Suzi wrote that I think can hold up to any ‘brilliant,’ quirky singer-songwriter press darling out there. I’m really proud of that track. I like ‘Freeway’ off of the album Slap-Happy. It is a track that is loved or hated by our fans. They get really heated over it. We had a blast recording that one.”

Which albums and songs left you frustrated, and why?

“Well I’m not going to tell you too much here. It’s like someone on a date asking the other person, ‘So, what do you feel are your physical flaws?’ Why would you tell them that? There is no upside.

“I will say that I don’t feel that we were ready as songwriters for our first album, L7. There are a couple of decent songs on there, but we grew as songwriters on our albums that followed. Smell the Magic was when we made our mark in the underground.”

Who were your favorite acts during the band’s initial run?

“We loved the Pixies, Nirvana, Helmet, the Lunachicks, Wool, Love Battery, 7 Year Bitch, Fugazi, Fuck Emos, the Breeders. Too many to mention.”

What’s your take on women in rock from before, during, and after the band’s initial run? Which acts inspired L7 the most, and how? Which feminists?

“There were amazing women in rock that came before us, especially in the punk scene of the ’70s and ’80s. I do feel that one of the grunge era’s greatest legacies is the large number of predominantly female bands. There were a lot of women out there doing all different styles, and some of us were breaking into mainstream media. It was exciting. I’m not quite seeing the amount of diversity these days.

“We were inspired by all kinds of bands, but what Suzi and I were going for in the beginning was a Ramones/Stooges/Hawkwind/Frightwig/Sabbath mash-up brew. More melodic elements came in later, but at first we wanted to be pretty bare bones hard rock (played by punk rockers).

“I personally am a boots-on-the-ground feminist, not an academic one. I might get around to reading some feminist philosophy books just for ‘herstorical’ sake, but I grew up in the ’70s and lived and breathed the Women’s Lib movement. I’m pretty good at smelling sexist bullshit from a mile away.

“Musically, I feel L7 sang for the frustrated and disenfranchised of all stripes. We were feminist from our sheer existence.”

What drove the band apart and what inspired you to reunite?

“The band broke apart because the wheels fell off. We had no money, our popularity had waned, we had no record label or management helping to figure out how to keep it going. None of us are business people by any means. When you’re hitting 40 with no money, no health insurance, no property, it will fuck with you in the head and it should. It’s a heartbreaker.”

What did you learn working without L7 that you took back to the band?

“I learned that our fans kept our name and music alive in the years of our absence. They posted videos and photos and started fan pages. They kept our music and image from being completely buried in the ‘new’ digital age. In appreciation of that, I want to present as kick-ass of a live show as possible. No fucking around, no inside jokes, giving it everything we got...for them. They are the sole reason we are back doing this.”

Any plans for a new album, a new popular insurrection, or anything else, after the tour?

“Well, there is a documentary coming out on L7 next year so we’re hoping to do a little more touring in support of that. No plans for new music at this time, but you never know...”