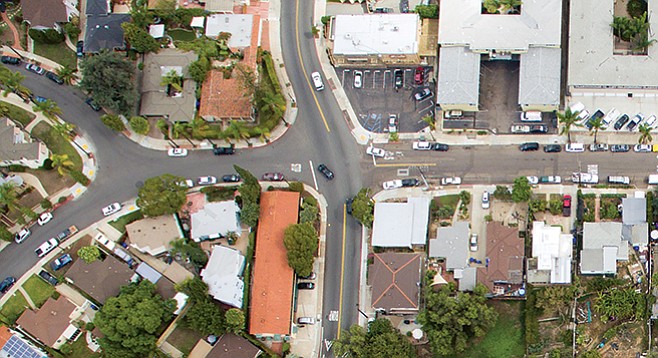 As a 20-plus year resident of Talmadge, I read “Two Talmadges” (November 5 cover story) thoroughly, and with great interest.

The ultimate resolution of traffic issues in the community lies within the jurisdiction of the city of San Diego, specifically the divisions of Traffic Engineering and Transportation & Storm Water. Multiple Band-Aid recommendations have been made over the years by traffic engineer Gary Pence, Sr., and the community has followed his advice. Now the community unfortunately finds itself with the scenario of neighbor pitted against neighbor.

Talmadge does not have a south versus north versus west issue; it has an obvious need to rectify decades-old traffic issues. Government entities need to come together for a joint project approach. Until that happens, the traffic issues cannot (and will not) be resolved.

I was a bit perplexed by your recent front-page article, “Two Talmadges” (November 5 cover story). Ostensibly, the article is about how the city and community planners are working to design a safe two-lane bike path through Talmadge, particularly on Monroe near Aldine.

Aldine is a key artery that connects Talmadge to the highways, and that section of road is narrow and heavily trafficked. It is scary to think of installing a two-lane bike path there, so I was curious about hearing the details of how this was going to be accomplished. Instead, the writer of the article devoted substantial space covering the opinions of a few residents who live on the south side of 47th Street.

One plan calls for the blocking of 47th Street at Monroe. Certainly, this will be annoying to the residents there, as they would then have to drive around the block to get to Monroe. But this plan was portrayed as a covert attempt to divide the more affluent northern side of Talmadge from the southern side, hence the title of the article, “Two Talmadges.”

Some residents said that Talmadge was trying to become a gated community. Allegations of discrimination were made. These views are downright silly. There are 25 streets that connect Monroe from the south, so blocking off one of them would hardly constitute dividing Talmadge in two. As for being discriminatory, this is never really explained, of course.

Your writer would have provided a much more useful article had he more fully explained how the city is going to design a safe two-lane bike path, rather than spending so much time on the nonsense opinions of a handful of residents. Perhaps he thought a more controversial article would be more interesting, but he certainly sacrificed credibility in writing it that way.

I don’t know Tatjana Zogovic, chief executive of United Artists of San Diego, or her group (“Nobody Cares, Zogo” ), but I take exception to her negative comments towards Kinsee Morlan, then of CityBeat, currently of Voice of San Diego.

During the years that Kinsee was arts editor at CityBeat, a local artist was included every week on the cover of CityBeat, with an article included. Hundreds of local artists, including myself, were given valuable exposure thanks to Kinsee Morlan. It’s easy to complain, but Kinsee actually did — and still does — give valuable coverage to local artists in San Diego.

From Friendly to Dangerous

Re: SD on the QT: “San Diego Zoo and Safari Park Takes Advantage of Orca Breeding Ban at SeaWorld”

SeaWorld’s orcas with the greatest number of aggressive incidents were all at San Diego together around 1978-1980, or are the offspring of these same orcas. They are the orcas in the bulk of the non-Tilikum scenes of Blackfish.

SeaWorld allowed visitors to play with the last orcas captured from the wild while they were in training. They established friendships with a number of visitors. A few years after these orcas moved on to full-time performing, they started turning dangerous. For more on this see For more on this see this article in Psychology Today.

The causes of orca violence are complex. It appears that orcas who had once experienced friendships with non-staff humans, in later years become the most violent and passed this onto their children. Keto, the other orca besides Tilikum to have killed his trainer, is a son/grandson of this original group. Orkid, the orca with the greatest number of aggressive incidents, is a daughter of this original group.