San Diego has had its Volkswagen-type scandals 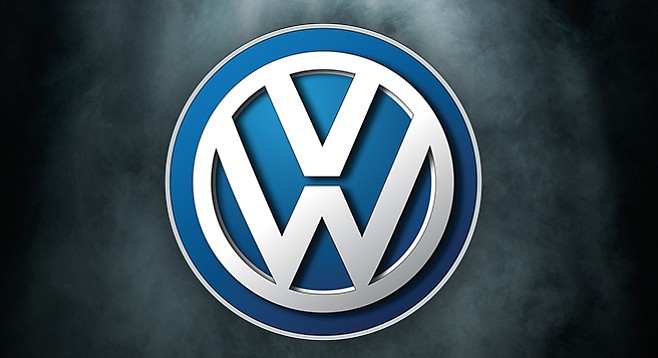 Corporate crises can kill. In the immediate aftermath of a major scandal, so-called experts warn that the guilty company could go under. Now, German automaker Volkswagen could succumb, warn some. The company, which touted itself as a “green” auto company, knowingly installed software permitting 11 million diesel cars to pass emissions tests fraudulently — thus polluting the air and the company’s name. There may be more.

“It is a reputational crisis of the highest magnitude that has the potential to destroy the company altogether,” writes Christopher Barger of the public relations firm Porter Novelli.

A scandal can wallop a company’s stock (as happened to Volkswagen’s) and sometimes be a death knell. There are a couple of poignant examples with San Diego companies. Biotech Sequenom is still suffering from management dishonesty that grievously harmed its credibility in 2009. Fast-food chain Jack in the Box has recovered handsomely from an internationally publicized food-poisoning breakout in 1993. But Jack’s rebound ate up a lot of corporate time and money.

Sequenom went public on February 1, 2000, a month before the peak of Nasdaq stocks that turned into a downswoop of almost 80 percent. Sequenom had no revenue but lots of sizzle. The company was an expert in gene technology; it was expected to churn out products that might predict a person’s predisposition to a disease.

By 2009, the stock had climbed back to $25, greatly because of excitement about a possible blockbuster product: a noninvasive prenatal test for Down syndrome. Oops! Suddenly, the company announced that it was probing whether the information it had gleefully given out was reliable. The stock plummeted to $5. Ultimately, the company announced that the “public should no longer rely on any of the previously announced test data and results” for the Down syndrome test.

The board fired the chief executive officer and Elizabeth Dragon, the head of research and development. Three other employees were axed and a couple of higher-ups resigned. All this “suggests that the rot was company-wide,” wrote CBSnews.com columnist Jim Edwards. Some wondered if the company would survive.

The Securities and Exchange Commission charged that Dragon lied on at least three occasions when she said the Down syndrome test was almost 100 percent accurate. “Dragon knew the test was far less accurate,” said the securities agency.

She agreed to cooperate with the securities agency and the Justice Department and pleaded guilty to criminal charges. According to the Federal Bureau of Investigation, Dragon admitted that “she and others caused Sequenom to issue press releases and various statements to investors and others falsely claiming that the Down syndrome test had been evaluated in ‘blinded’ studies — that is, that the scientists conducting the tests did not know the actual outcomes.” Actually, the tests were not “blinded” because “scientists either knew the outcomes before testing the samples, or had been directed to change their initial results.” Dragon died February 26, 2011, of natural causes, according to her lawyer. She died before sentencing and before passing key information to the government. The Securities and Exchange Commission on September 1, 2011, ordered Sequenom to cease and desist from breaking securities laws. The company has revealed little — one reason skepticism still overhangs company announcements, such as for its new Down syndrome test. 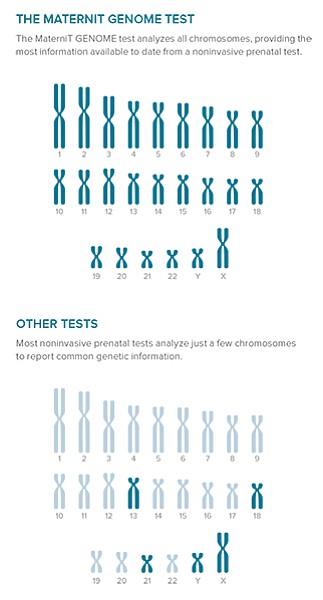 Following Sequenom’s scandal of 2009, it has trouble establishing credibility for the claims it is making.

Sequenom stock has had trouble getting up to a lowly $2. It took big tumbles both in May and September of this year as its results disappointed Wall Street. Said Brian Orelli of Motley Fool, “Neither investors nor analysts seem to be all that impressed with the company’s plans for developing new diagnostic tests.”

Annoyed by the company’s hazy statements about its 2009 woes, one analyst summed it up well, scolding management, “Part of your future is your past.… We are entitled to know what did happen.”

Sequenom’s management scam was not widely reported in the media. But the 1993 Jack in the Box disaster raced around the world. More than 700 people, mainly in the state of Washington, were affected by the E. coli outbreak caused by undercooked hamburger patties; 171 people were hospitalized and 4 children died. “Analysts worry whether Jack in the Box will be able to recover,” said the New York Times.

The parent company, then named Foodmaker, made some errors. Even after health officials traced the problem to Jack in the Box, executives clammed up for two days. When the company did comment, it pointed the finger at others, such as a supplier and the state of Washington’s Department of Health. Quickly, it dropped its criticism of the health department and, eventually, it got a good settlement from meat suppliers.

A year before the outbreak, the state of Washington had declared that meat should be cooked at a temperature of 155 degrees. Foodmaker stuck to the national standard of 140 degrees. If the burgers had been cooked at that higher temperature, there likely would have been no crisis. At first, Foodmaker said it had not received the word from Washington’s health department — hence the initial criticism. The dropping of the criticism suggested that the company realized it had an obligation to know of any rules changes in any state in which it operated. In time, a quality-control executive blamed himself for not knowing about the new rule.

Quickly, Foodmaker fired its public relations firm, hired a top-flight crisis communicator, suspended beef product sales, destroyed 20,000 pounds of ground beef, set up a hotline, made a generous contribution to help prevent E. coli poisoning, and, most importantly, said it would do everything “morally right” for victims and their families. It did so, and that cost a lot of money. Before much time elapsed, Foodmaker wisely hired a respected microbiologist who set up a safety assurance program.

Jack in the Box blows up boardroom in commercial 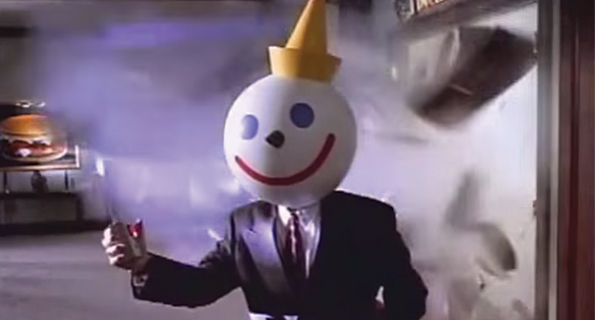 At first, the stock cratered. Slowly, the company pulled out of the morass, and it put on an advertising program symbolically suggesting the company’s old culture was being blown up.

In the past several years, the company, now named Jack in the Box, has prospered. Its stock in the past year came within a penny of $100. It has sunk below $80.

Now Jack in the Box cooks the shit out of their hamburgers.

AlexClarke: That statement can be taken two ways. I hope you meant the positive way. Best, Don Bauder

Bill Wisniewski: We are a scandal-rich county, but I don't think we can take credit for Ruby Ridge. Best, Don Bauder

Bill Wisniewski: And happy vets day to you and yours, too. Best, Don Bauder

Don, you do a piece of reporting, and are once again excoriated for it. Dewdney, whoever that is, in Ontario, says you misreported the story in many ways. These Reader blogs, by members of the staff, are often called biased or judgmental by commenters who just don't like the news. I can't think of a single instance when the reports were demonstrably false or generally inaccurate. In fact, the Reader seems to be more careful to get it right than its local rival, the Light News.

But to the topic of VW, this scandal is huge, and isn't going to go away. Could it sink the world's largest auto manufacturer? That's hard to contemplate, but anything could happen. Heck, if any car builder was going to be brought down by its own mismanagement, I'd have said it would be GM, or maybe Ford. But just because some enterprise is really big and non-US doesn't guarantee it does everything right.

Two years ago, I was seriously considering buying a VW Passat diesel. If I had one now, I would be very unhappy, not with the car or its performance, but with the corner-cutting that this company did to make it commercially viable. At least the company didn't keep trying to hide and/or deny the matter when it was finally revealed. That's a good step in the right direction. The troubling thing so far is the pitiful offer VW is making to its diesel owners, with a paltry $500 in cash, and some more in credit to be used. The only way to use the credit is to buy another VW product, and that's not what many irate owners will ever want to do again. So, we haven't heard the last of that at all. When VW modifies the software to comply with the emissions limit, and I'd suppose that all owners will be compelled to have it installed, the performance of the cars could be dismal. Then you'll have hell to pay, and class action lawsuits will be asking for full refunds/buybacks. Wow.

Visduh: In re Sequenom: I knew there would be screams on this one. Those with a long position are convinced that the Down Syndrome test is a winner, as are some of SQNM's other programs. There is a heavy short position in the stock. If Wall Street became convinced that the new products are sure winners, the shorts would rush to cover and the stock would have a big ride up. It hasn't happened. Sequenom still has a credibility problem.

VW has a huge problem. Civil suit are piling up around the world. Governments should be pursuing criminal actions, because these were criminal acts. There will probably be a global settlement in the civil cases. Criminal? Who knows? Best, Don Bauder

Chris Dewdney: The market is not sold on Sequenom's product lineup, but if that changes, the stock could soar because of the heavy short position. The shorts would run to cover and the stock would pop.

You could probably do better playing DraftKings every week, though, or buying lottery tickets every day.

For ethics reasons, I can't buy any San Diego issue (bond or stock), but if I could, and if I were in a gambling mood (and I almost never am), I might nibble on Sequenom. Best, Don Bauder

Is this a possible plot by the evil Canadians to kill us off a few Yanks at a time so they can repopulate their south?

Robert_J_Squirrel: And the State of Washington was one of the first, if not the first, to put in stricter meat-cooking rules, particularly higher temperatures. Curious. Best, Don Bauder