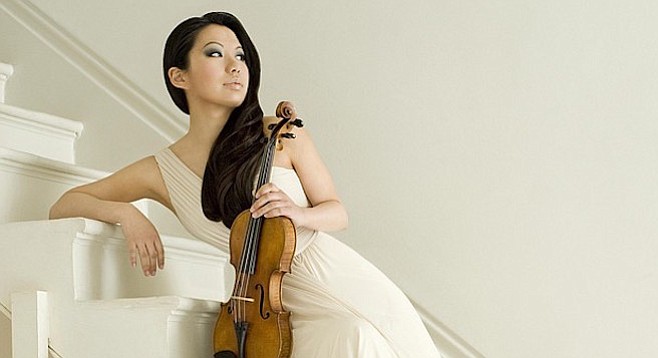 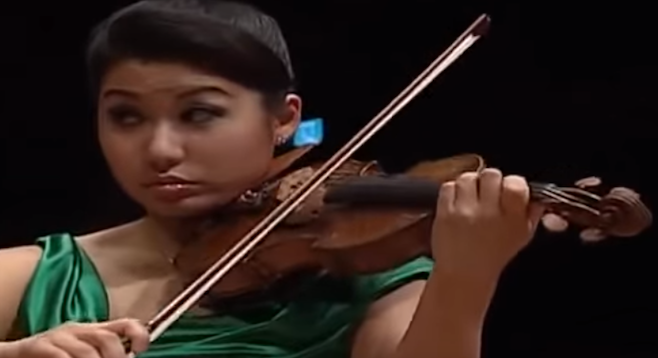 Sarah Chang playing Bruch and Tchaikovsky Symphony No. 6: Pathetique was the moon and stars on Saturday night at Symphony Hall. There was a sunny piece of new music by Judd Greenstein, but as soon as Ms. Chang placed bow to strings, nothing else mattered.

The authority of her playing was matched by her ability to let herself go with the music. Her performance had that “at home listening to loud music” mojo.If you don’t know what I’m talking about then may God have pity on your soul.

I’m talking about that time you had The Great Gate of Kiev cranked up to 11 and were air-conducting it shirtless in front of the bathroom mirror — or something like that.

Sarah Chang brought that kind of honesty to her performance. Why is it honest? Because we all want to feel the music and move to it the way she does. How do I know? Because I watched patrons impersonating her style during the intermission.

I’m just saying I hope it worked out for some of the couples in the audience because on this night, Sarah Chang plus Max Bruch equaled Barry White — on aphrodisiacs.

The opening bassoon solo in Tchaikovsky's Symphony No. 6 was dark, chilling, and hopeless in all the right ways. “Winter is coming,” it seemed to say. After that ideal opening, the performance of the first movement was uneven.

It was full of great stretches of music but the stretches didn’t hold together as well as we might expect. It felt as though there was a shadow beat between sections of the orchestras. I have no idea what a shadow beat is but I think you get the point. Nothing was sloppy. It was just un-tight.

The third movement was so impressive that the audience ignored maestro Ling’s direction and clapped. Ling held his hands up, indicating that the performance was not over but folks clapped anyway.

If there is one time to not clap between movements it’s between the third and fourth movements of Tchaikovsky’s sixth. If you don’t know why then look it up or just take my word for it.

You know what? I’m going to tell you. People shouldn’t clap because it’s the right thing to do and it’s easy. Just don’t clap. That’s it.

Still not convinced? Clapping between movements shows that you’re uninformed at best and disrespectful at worst. Stop it.

“Well, I like to show my appreciation for the amazing people on the stage.”

Great. Guess what? The amazing people on the stage want you to wait until the entire piece of music is over before you show your appreciation. If you’re so gung-ho to show appreciation then appreciate the traditions of the situation you are in.

If you follow the band Phish then you smoke pot, drop acid, and hang out in Denny’s all night after a concert. That's the tradition.

If you go to the symphony you tell your brain to tell you hands to wait to clap and then you go smoke pot, drop acid, and hang out in Denny’s. That should probably be the tradition.

In the concluding movement of the Tchaikovsky things tightened up and the pathos which gives this symphony the cognomen Pathetique came pouring out of the orchestra. It’s always difficult to experience the emotion of this composition. It feels as though Tchaikovsky resigns and walks away, leaving us with nothing.