"We each have the fundamental right to develop our property..." 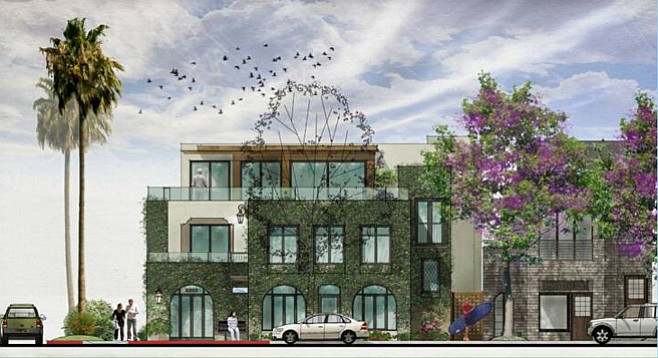 Over the course of the past five years, La Jolla Shores property owner Bob Whitney has fought against neighbors and the La Jolla Community Planning Association to demolish two single-story units located on Avenida La Playa, in the La Jolla Shores Commercial District, to make room for an 8518-square-foot three-story mixed-use building.

The fight will continue. On November 3, a community group by the name of La Jolla Shores Tomorrow filed a lawsuit against the City of San Diego, challenging their approval of Whitney's proposed development.

The project dates back to 2009. It was then that the La Jolla Community Planning Association refused to support Whitney's project, citing visual impacts as well as some environmental issues. The following year, a hearing officer for the City of San Diego debunked their objections and granted the necessary permits for the project, with some minor alterations. The planning group appealed the decision. Councilmembers discussed the appeal the following year and decided that the project required an environmental review.

During the following years, Whitney and members of the planning group waged a war of public opinion. Whitney created websites and launched community groups aimed at lessening the power and influence of La Jolla planners and groups such as La Jolla Shores Tomorrow. He called one such group La Jolla Shores Today. On that website was the following message:

"The sole intent of this website is to dispel the false, inaccurate and misleading information and images being circulated throughout our community regarding our building. This information is being dispersed by current and former La Jolla Community Planning Association Trustees, such as Phil Merten, Joe La Cava and Myrna Naegle.

In December of last year, as reported by the Reader, Whitney sued the city and the La Jolla Community Planning Association, claiming planners rigged elections to prevent Whitney from gaining a seat and ensuring that longtime planner and city-council candidate Joe LaCava continue to serve a chair of the group.

Fast-forward to October 5, 2015, when the city council once again discussed Whitney's proposed development. Despite expressing some concern, a majority of councilmembers, excluding La Jolla's representative Sherri Lightner, approved the project.

The La Jolla Shores Tomorrow group has now responded with a lawsuit of their own.

In their suit, the group alleges that the environmental impact report failed to review the actual scope of the project and the numerous design changes. Adding to it, says the lawsuit, the environmental review neglected to address visual impacts, transportation and traffic impacts, hydrology issues, as well as the project being out of step with the surrounding architecture.

The group is asking a judge to rescind council approval of the project as well as any permits issued.

Whitney and his ilk will be the first to complain if something they don't like is planned to be built next to their property. The difference between the whiners in La Jolla and elsewhere is money.

Not to worry, there is no room for something else to be built next to Bob Whitney's massive bulky corner property, greenlighted for the last time by a craven City Council.The only person with an equally rich record for self-serving is Whitney's arch-enemy City Council candidate Joe La Cava. They are well-matched.