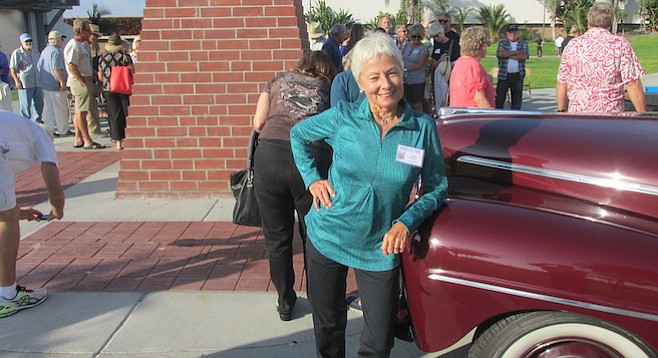 Last week’s homecoming was a big one at San Dieguito High School Academy. At the end of the accelerated first semester, the student body enjoyed homecoming activities and dress-up spirit days.

Elsewhere on the 79-year-old campus, at the beginning of homecoming week (October 23), about 100 invited alumni, staff, and current students celebrated the annual reception for the school’s founding classes — 1937 to 1945 — and inducted its first former student into the school’s newly established Hall of Fame.

The classes of 1940 and 1945 also celebrated their 75th and 70th class reunions. Bonnie Wren, the Encinitas campus’ alumni association coordinator, pointed out that those two classes were much different in campus and community culture, due to the history we now know.

Addressing the ten attending members of the Class of 1940, Wren commented, “During your senior year, Hitler had invaded Poland and was pushing across Europe. The Class of 1940 was about to go to war,” she said. “By the time the Class of 1945 graduated, the European war was over, and in your first summer out of school, Japan would surrender.”

Asked what they remembered about attending San Dieguito High, there was no talk of war and the troubled times of rationing or the neighborhood’s young men going off to battle. They instead shared stories about time with their friends, school sports, teachers, and, most of all, the beach.

Mary Arballo Magaña (’40) represented the alumni in sharing her memories to the group. Magaña returned to the campus in 1948 as the school’s first state-credentialed teacher. An old teachers’ manual read, “The principal should be involved when disruptive behaviors such as chewing gum and wearing denim dungarees occur in the classroom.”

Surf champion Linda Benson (’62) was honored as the school’s first inductee into the Hall of Fame, chosen from a list of 60 notable alumni in the fields of sports, entertainment, science, and academics. 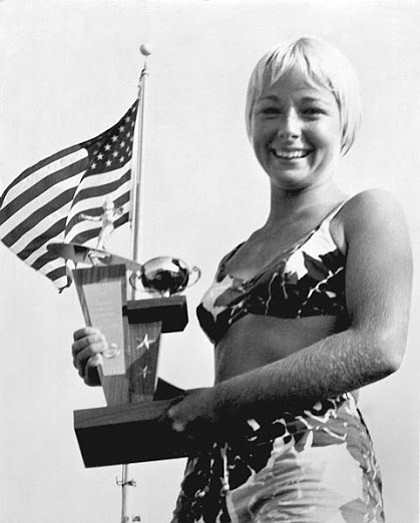 At age 15, Benson became the first woman to surf Hawaii’s Waimea Bay. She went on to win the women’s world championship in 1959, followed by six U.S. titles. Benson also stunt-doubled for stars Annette Funicello, Sandra Dee, and Deborah Walley in the corny Gidget and surf movies of the 1960s.

When asked if her fellow students knew of her titles and world fame, Benson responded, “Well, yes. But it was no big deal [at San Dieguito]. That’s just what we did. We were girl surfers. We surfed all the time.”

Pearl Jam’s Eddie Vedder (’82) and Switchfoot’s John (’95) and Tim (’97) Foreman may have been influenced in their early careers of fellow alumni Chris Hillman (‘62) a rock pioneer member of groups the Byrds and the Flying Burrito Brothers.

Disclosure: The writer, while not yet a notable alumni, graduated from San Dieguito in 1973, where he is currently active in the school’s alumni association.