What to do with these dying animals?

Are there any “humane” ways to control the sea lion population? 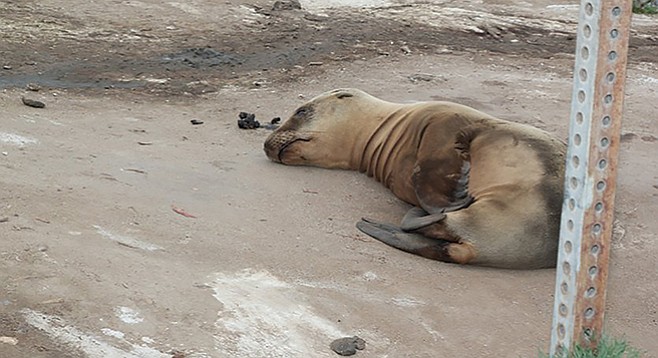 Many sea lions are dying. Possible causes include sardine depletion, warming waters, changing conditions, and ultimately, starvation. During strong El Niño events, pup production decreases while pup mortality has increases. In early 2015 there have been over 2000 stranded and starving sea lions found on beaches, eclipsing all previous die-offs. This is predicted to be a strong El Niño year, following a weaker one last year. From National Oceanic and Atmospheric Administration biologist Jeff Laake: “We weighed pups in October and February on San Miguel and San Nicolas Island. About 90 percent of the pups are born on those two islands. About 30–40 percent of the pups did not gain or lost weight. The pups are severely underweight for this time of the year and when they strike out on their own they don’t have the experience or much of any reserve energy to swim, dive, and forage effectively, so they strand on beaches or die at sea. We are not seeing much mortality on the islands, which is different than 2012/’13. Pups typically don’t wean until April–May, and there is typically a small spike in stranding in the spring related to weaning.

“If the current conditions continue we may start seeing more non-pups strand if they are unable to find enough forage. However, the problem, while widespread, is not universal. Some females have been able to provide for their pups and maintain their own body condition.

“Most of these starving animals this year are pups less than two years old, which would indicate a drop in the amount of the smaller fish and squid they feed on after being weaned and a lesser supply of milk while nursing. Females (cows) with nursing pups under one year of age forage at sea. The pups fast while the cows hunt for up to five days and if the cow isn’t very successful, both the cow and the pup’s health will become stressed. They nurse their pups for one to two days and then leave the pup ashore while they return to sea to feed for another two to five days.”

When asked if rescuing the sea lions, feeding them back to health, and then releasing them is a good thing for the environment, he stressed that, if left on the beach, they ultimately will die, and potential for unpleasant public interaction is increased. When I asked about “humane” ways to control the population to healthy levels, he replied “I don’t offer opinions on that issue. I did once, and my opinion was not well received by some.”