One mile into inland Oceanside, 52 years of practice

Know when to flip it 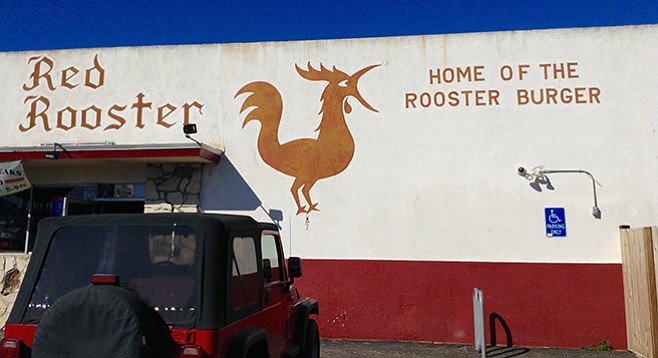 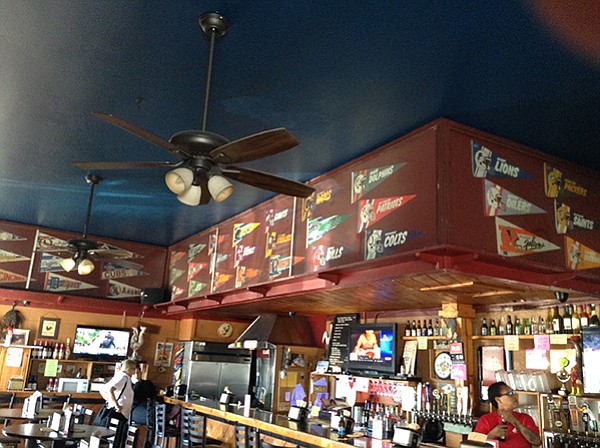 The three women huddle up to the bar. They’re talking husbands. Laughs echo out through the front door.

At first you can only make out their silhouettes as you come in from the glaring sunlight. But then as your eyes adjust, they all materialize, like in Star Trek. Pebbles, the gal behind the bar, “Karen,” (not her real name, because she’s in the middle of a messy divorce), and Ana.

Talk about Star Trek! I’ve trekked all the way up Oceanside Boulevard this hot Tuesday afternoon because a buddy of mine kept harping on about how this dive bar he went to has “the juiciest burger in North County, maybe the world.” He stopped short of “galaxy.” He lives downtown. Has only had a “Rooster Burger” once. Certain amount of cerveza involved. Remembers it was a place his work buddies took him to one night. But name? Location? “Oceanside. Inland.” That’s it.

Turns out he was talking about the Red Rooster, a mile or so inland. The old white-and-red cement box building has a faded red rooster squawking “Home of the Rooster Burger” on the side wall. 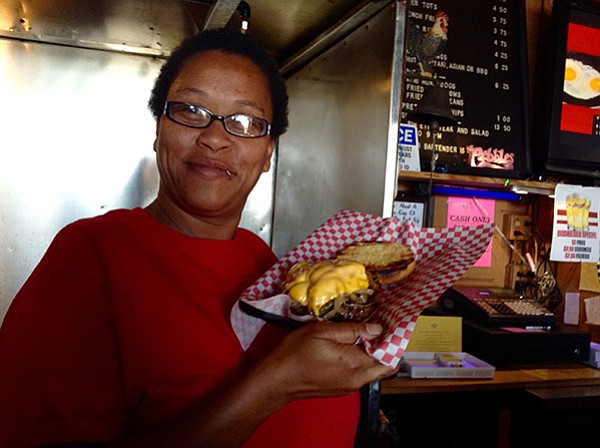 I feel my way through the dark, onto a stool, and sit up to the bar. Pebbles appears out of the gloom.

That must apply all day, because right now it’s, like, mid-afternoon. Hmm... Pabst Blue Ribbon, $2 schooner. A serious temptation.

But, sigh. These danged work nights. Order a Sprite. Pebbles (her mom named her after the Flintstones kid) goes off to get that.

“And you can grill that yourself at the fire pit out back,” says Pebbles, laying down my Sprite ($1.50).

“You’ll have to come back Sunday,” says Karen. 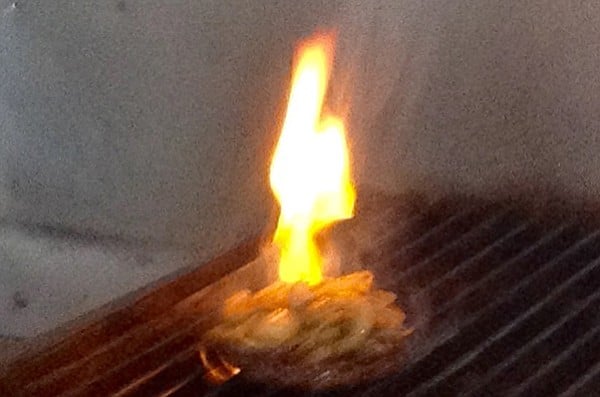 My Rooster Burger gets the full flame treatment

She’s a regular. “When I first came, I thought ‘Eww, a dive bar.’ But people were so friendly, and you get to know them. This has become my ‘Cheers.’”

“Guess I’ll have to go for the Rooster Burger,” I say.

“You won’t regret it,” says Karen. “It’s not just the way they cook it, it’s this grill itself. The iron rack. It’s totally seasoned. That really helps give the flavor.”

“I don’t put anything special on the patty, like marinating,” says Pebbles. “The only thing is the meat’s never frozen, and I put a bit of pepper and spices on as it grills. And we pre-grill the onions. That’s it. So, you’ll go for it?”

“That’ll be $9.25,” she says firmly. Turns out it’s cash only, and they like to see the color of your money before they throw the slab on.

I pay, then look around. Lots of carved roosters. Pennants of football teams above the bar, nice stone patio out back with a big ol’ palm tree shading it, and a massive fire pit in the middle. Inside the back, a pool table, and a “Red Rooster Wall of Fame,” plus a tattered flag and picture of Marines in action and the caption “What have YOU done for THEM today?”

But now, a belch of smoke. Pebbles has slapped the patty on the grill. She lets it cook for a while, chats with the gals about that divorce Karen’s going through, then casually flips the patty to a big hiss. 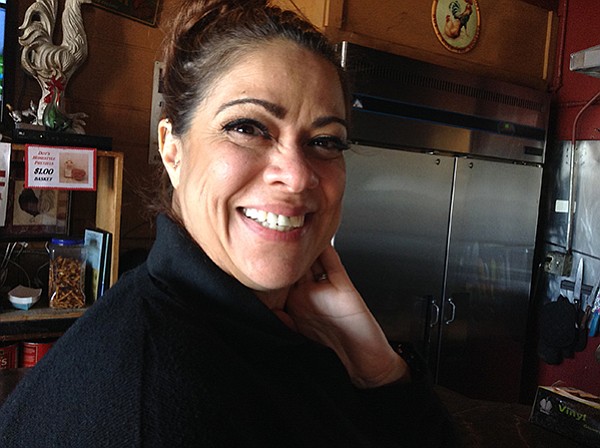 She piles on the onions and squirts a bit of oil. The smoke starts again, and pop! Flames bust out and kinda float in the smoke above the patty. The onions crackle and curl. The edges of the meat start to go a little black. Now Pebbles lays down a square of cheddar. I’m so caught up in this, happening right in front of me, that I miss how she toasts the buns. But flip, slap, plop, and here it is, my Rooster Burger, steaming, open, evil, on red-and-white-checkered paper in a basket, beside another basket of ketchup, mayo, mustard, and a bunch of jars with wicked-looking pickles, including one of yellow Ortega chilis.

“Taste it first,” says Pebbles. “Most people never add anything.”

“Except I usually put some mayo on the buns after the first bite,” says Ana. “I just can’t seem to eat burgers without it.”

I end up not adding nothin’, except I do crack out an Ortega chili and take little bites that send zings around my throat. This is a deeply flavorful and juicy burger, from first bite to last. So glad I didn’t order fries or tots or wings. I’ve had the perfect amount. Except, man, if I’d just had that schooner of PBR, I’d be $2 poorer and a whole lot happier.

“How did you keep it so moist, but crispy-burned on the outside?” I ask Pebbles. “And how did you know when one side’s done, but not too dry or burned?”

Pebbles looks straight at me. “It’s like in life,” she says. “You’ve got to know when to flip it.”

Hey. That’s good. I see Karen nod. Guess she knows as well as any of us.

Thanks Ponzi. And Johanna, Indiana? Wow. That makes my mile walk seem like peanuts. Rita: I agree. There's something about RR. Hey, the Rolls Royce of burger dives?