Drunkards in a basket 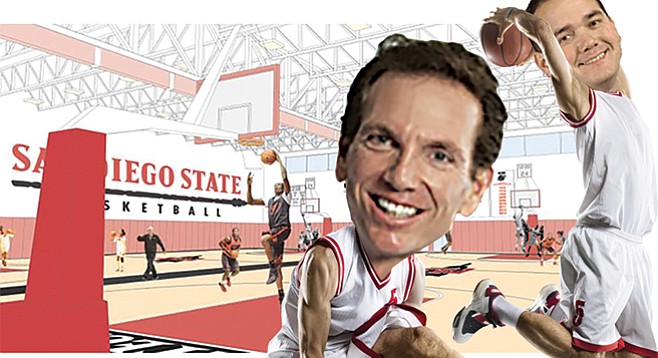 Qualcomm heir Jeff Jacobs, who is such a fan of the San Diego State University basketball team that he came up with $1.1 million to help build the school’s new hoops performance center — named after him and other Qualcomm notables — has also provided free air-taxi service to the school’s associate athletic director, Robert Moosbrugger. Now another Jeff, this one with the last name Jeffrey, has also contributed to Moosbrugger’s transportation. According to a financial disclosure report filed April 6, Jeff Jeffrey transported the official one-way between San Diego and Boise, Idaho, last November 15 for an “Aztec football against Boise State University” game. The free flight was valued at $250. There was no explanation for the late revelation.

Meanwhile, Jim Harbaugh, the former University of San Diego football coach who in October 2005 was busted in Encinitas for driving under the influence, is dealing with a familiar situation as head coach at the University of Michigan. The Detroit Free Press reported May 14 that Harbaugh’s right-hand man Jim Minick was indefinitely suspended from his duties following his arrest after the crash of his 2015 GMC Yukon. He refused a Breathalyzer test. “Jim Minick made a regrettable decision last week and was arrested for operating a vehicle while intoxicated,” said Harbaugh in a statement. “Jim makes no excuses, regrets this decision and understands the consequences for his actions.”

As USD coach, Harbaugh was pulled over after running a stop sign and also refused to take a sobriety test. He subsequently copped a plea to reckless driving, receiving three years’ probation and a $1300 fine. “I feel I’ve had a lifetime of good social decision-making,” Harbaugh was quoted as saying by the Union-Tribune. “This was a bad one. I’ll vow right here and now it will never happen again. People who know me know this is not an indication of my character.”

About Harbaugh’s relationship with Minick, the Free Press reported, “Minick often drives Harbaugh to events. They often are together at games, charity events, banquets and clinics. Harbaugh and Minick were on the sideline together for the Ravens-Steelers playoff game Jan. 3 in Pittsburgh. Harbaugh’s brother, John, coaches the Ravens.”

Not trying to defend Minick or Harbaugh, but refusing a Breathalyzer test and a sobriety test could very well be two different things. I don't know Michigan state laws, but I believe in California, when you sign your driver license application, you are submitting to a chemical test if you are stopped on suspicion of DWI. If the sobriety test was a standard field sobriety test that Harbaugh refused to take, that in itself shouldn't have been wrong, but he still would have had to submit to a chemical test of his choice.