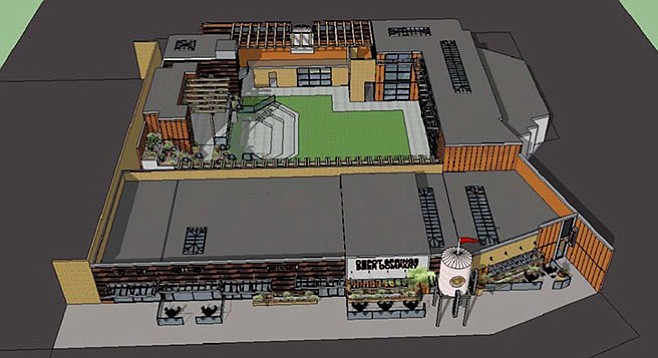 In a July 2014 Blurt, Aaron Dean was introduced as the La Mesa landlord behind a redevelopment that meant the end to a Fletcher Parkway strip mall and its neighborhood bar. Dean mentioned at the time that he had plans for his own venue.

Last week Dean told the Reader that he had secured the funding and received the permits to proceed with Platform 1888.

“A venue like this just doesn’t exist in San Diego,” said Dean, 44. “I am a big fan of the San Diego music scene, but there just aren’t a lot of places to play.

“We are 100 percent fully funded. We got approved for all the space we wanted and permission for everything we wanted to do.”

Dean is building out the 7000-square-foot Depot Springs Beer Company and the adjacent Platform 1888, a 25,000-square-foot full-service restaurant and outdoor venue on Fletcher Parkway. He said the venue will hold approximately 900, based on a 300-capacity restaurant and 600 for the amphitheater (or 450 if it is a seated show).

Dean said the rock, jazz, country, acoustic, and comedy artists who will perform at Platform 1888 will get paid, even though there is no cover charge. “We would probably be cautious about heavy metal and punk. But if Metallica wanted to come here and play their acoustic album, we’d be happy to have them.”

Dean said that even if he can attract a major-name headliner, Platform 1888 still would not have a cover charge. Most of his bookings, he said, will be local artists and that techs will be on hand to operate a new sound and light system.

But is this model too good to be true? Wouldn’t Platform 1888’s proximity to SDSU encourage college kids to just show up and hang out?

“I can’t imagine a lot of people showing up and not buying anything. We are not going to disallow people from coming.”

Steve Kader, Adams Avenue Street Fair talent coordinator, will handle the booking for Platform 1888. Kader said local artists such as Cash’d Out, Jimmy Ruelas, Grampa Drew’s Flim Flam Review, G. Burns Jug Band, Stephen Rey, Erika Davies, Tim Flannery, and Cody Lovaas are on his wish list. “We want to appeal to people from 8 to 80....a page from the past and a page from the future.”

Dean predicts a December opening for Platform 1888, which is named after La Mesa’s first railroad platform, built 127 years ago.