Six stories on Baltimore? No, no, no

And does anyone remember the Classic Cat in La Mesa? 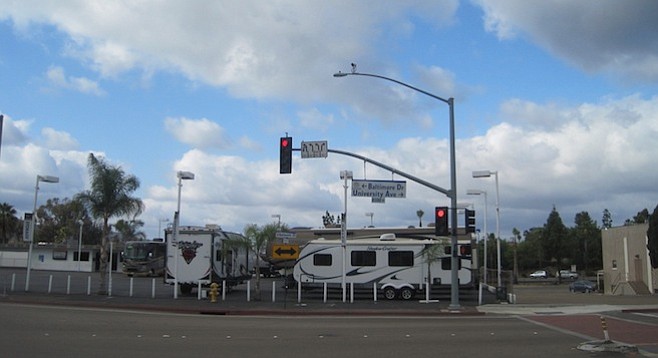 The La Mesa Planning Commission on May 20 voted 4-2 against recommending that the city council approve the revised specific plan for Park Station at the Crossroads of La Mesa, a mixed-use development proposed for a 4.54-acre site on the southeast corner of El Cajon Boulevard and Baltimore Drive. At that intersection, El Cajon Boulevard leads onto eastbound Interstate 8. University Avenue and Nebo Drive also border the property, and Spring Street is to the east. 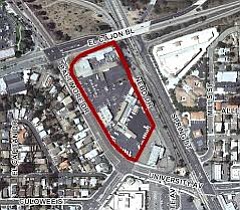 In the vote, commissioners said the plan with building heights ranging from four to six stories was inconsistent with La Mesa's general plan and its objectives. Prior to that vote, commissioners voted unanimously to approve the environmental impact report for the project that could consist of residences, shops, restaurants, office space, and possibly a hotel. 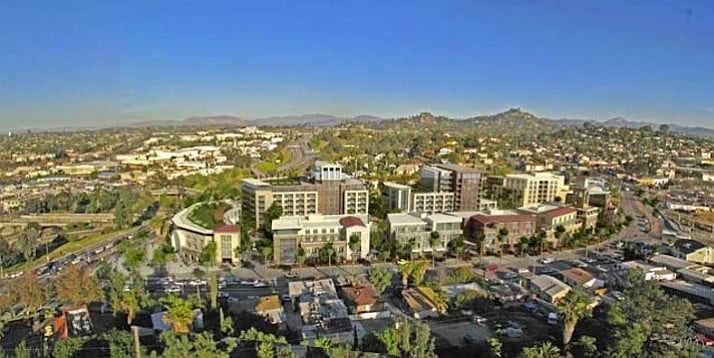 Currently, businesses such an RV rental company and auto-body shop are on the land that the Kitzman family has owned for more than 50 years. Frank, Joseph, and David Kitzman are listed in the specific plan as contacts for the applicant, South Baltimore, LLC. Also working on the plan is the development group Urban Housing Partners.

The Park Station team will take their plan to the council, Urban Housing president Sherman Harmer said in an interview after the meeting. "We're disappointed, but we're not discouraged," he said, adding that the project would cost about $250 million.

The May 20 forum was the third commission hearing on the plan. Last year, commissioners tabled the matter on June 18 after learning that American Legion La Mesa Post 282 withdrew as a co-applicant.

That decision was announced during the hearing on the proposal to raise the height limit to 110 feet (about ten stories) on a 5.23-acre site that included the post located on the 8100 block of University Avenue. Development plans included a maximum of about 416 homes or a 500-room hotel in lieu of residences.

The Park Station team returned October 1 with a proposal for up to 363 homes or a 250-room hotel. While the height limit hadn't changed, Harmer told commissioners that applicants would lower the height to eight stories and raise the amount of residential parking spaces from 1 to 1.25 per unit.

The commission voted 6-1 to deny the plan, and the team returned this month with the plan proposing four-story buildings along Baltimore Drive. That height was proposed for 60 percent of the property; the remaining land along Spring Street and I-8 would be six stories.

The staff report from community-development director Bill Chopyk and senior planner Chris Jacobs said the revised plan proposed from 0-363 dwelling units or 0- 250 hotel rooms, or 28,000 to 61,000 square feet of retail use, or from 0-146,000 square feet of office use.

Furthermore, the staff report stated "primary concerns" in the plan were the request for “by-right approval” in areas such as zoning for hotel/motel use. That approval would “pre-empt the city's ability to review a conditional-use permit and add appropriate conditions for a specific hotel/motel project in the future, without knowing what specific kind of hotel or motel is proposed.“

Harmer said applicants would use the conditional-permit process if hotel zoning was approved.

During public testimony, resident Lys Severston said she was excited about the transit-oriented development. She and La Mesa Chamber of Commerce president Mary England endorsed construction of a hotel. England said the chamber board supported the project. "It’s a great gateway" to La Mesa, she said.

Opponents, including Suda House, urged the commission not to give the applicants a blank check. Some spoke of the consequences from what they called a lack of specifics.

Nellie Andrade said she’s been a resident since 1974 and asked, "Does anyone remember the Classic Cat in La Mesa?" After some changes to a restaurant, she said, "topless ladies were serving lunch" at the Classic Cat.

The property in question is blighted with a low end auto dealer, a mechanic shop, and body shop and a low end RV dealer. All in all these businesses create very little traffic. Baltimore, El Cajon Blvd, University Ave, and Spring St. are four lane roads that carry a lot of traffic. If you add to the existing traffic the amount that this project would add the area would be gridlocked. No matter how many "smart" traffic signals were operating it would be defeated by the Trolley running parallel to Spring St and crossing University Ave. Then you have the busiest fire station in La Mesa at Allison and University. The trolley and fire station traffic snarl the existing flow now just think about the additional traffic this project will bring. The existing roads can not we expanded and are near maximum capacity now.