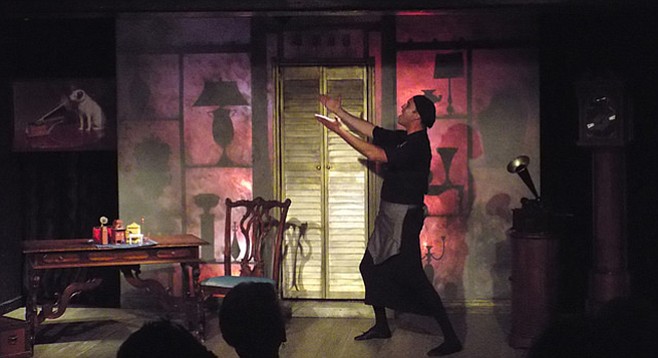 I still don’t believe this story! The New Group West’s first-ever show will represent California, Arizona, Nevada, and Hawaii in a national competition!

American Association of Community Theatre has 12 regions. San Diego is in Region Eight. Every two years, AACT has a national competition. New Group West is headed for the finals at Grand Rapids, this June.

The company’s so new you may not have heard of them. Last September they staged Doug Wright’s Pulitzer Prize-winning, I Am My Own Wife at the Tenth Avenue Theater.

The solo show, originally workshopped at the La Jolla Playhouse in 2001, tells the story of Charlotte von Mahlsdorf. The 65-year-old, transgender person survived the Holocaust and Soviet-dominated East Germany and fought to preserve German antiquities. As she gives a tour of her collection, one actor plays Charlotte and 26 other characters.

They went, performed, and conquered. They won awards for Best Production, Best Acting (James P. Darvas) and Best Direction (Mark Zweifach), and would represent California at the four-state regional AACTFest at Flagstaff, Arizona, hosted by the Theatrikos Theatre Company.

But couldn’t afford it. Poway Performing Arts Company’s British farce, I Do, I Do, I Do, took second at Long Beach. In what is a first, PowPAC artistic director Sherrie Colbourn urged local members of the ACCT to support the trip to Arizona.

You guessed it: two weeks ago, New Group West won there too! Awards for Best Production, Acting, and Technical Direction (Keala Milles, Jr.), and the right to represent Region Eight at Grand Rapids, Michigan, in June.

This story’s so rags-to-riches strains credulity: a supersonic vault from “hey gang, let’s put on a show!” to the state, regional, and now one of 12 finalists at the nationals.

“When New Group West began,” says Gil Savage, board member of the American Association of Community Theatres, “they’d never heard of AACT. This is the equivalent of a start-up making the big numbers in the blink of an eye.”

But the leap happened so fast the rags, so to speak, need some riches for the trip.

Tickets are $20 (“check or cash only at the door; tickets not available for this event at the online PowPAC site”).

Crowd-funding is available for those unable to attend but want to contribute.