“By the fifth or sixth bite I started scooping the rice and beans into the sauce.” 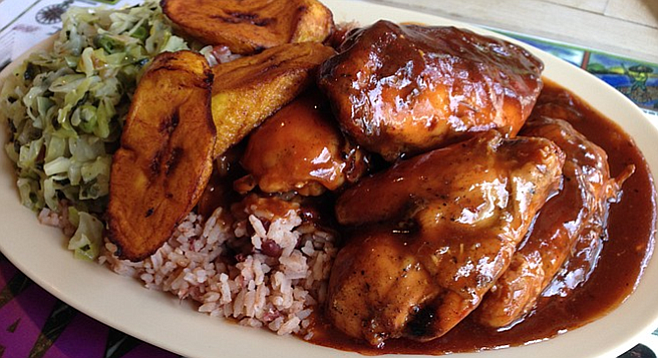 For three years I lived a mere 2000 feet from Jamaican restaurant Island Spice, but due to the mystery of dead ends and freeway overpasses I rarely ever passed by, and I never paid a visit. I regret that, now that I’ve stopped in for a sizeable and succulent chicken lunch. 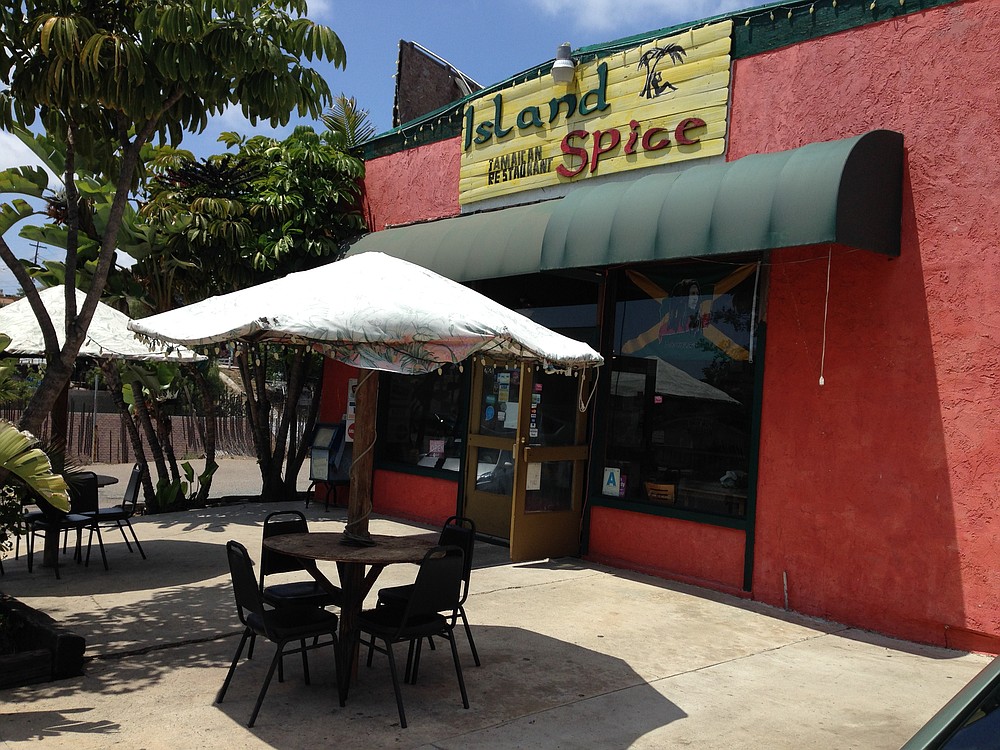 Not hard to spot if you’re going the right way

I might not have chosen the best of days for it. I was on my way home from a graduation event and wearing a nice, light-colored shirt. Once I’d decided to go Jamaican, I’d resolved not to order any jerk chicken, the one Jamaican dish I’d previously encountered. However, I hadn’t made a rule against the Bar-B-Que chicken, and it sounded too good to skip: “Seasoned with island spices, then left to marinate. The chicken is then bar-b-qued to a tender brown.” Oh, and one more thing. It’s sautéed and then slathered in “Jamaican style bar-b-que sauce.”

Yes, heavy potential-to-stain-that-shirt sauce. At $11 for a small order and $13 for a large, I initially figured large might be worth it. But since the chicken comes with plantains, rice, and beans, and veggies on the side, I chose the small. That turned out to be a thigh, leg, breast, and wing — a big plate of poultry. They tell me the large would have been a half-chicken, which puts me at a loss to name any other edible parts that could have been included.

The hefty plate of food arrived, and I found myself angling my body to avoid spilling on my shirt. First I tackled the veggies, a mix of braised cabbage and assorted vegetables — tasty enough, especially if you like collard greens. The red beans and rice mix didn’t have a strong taste, and the plantains just did their tough banana thing, which never seems to vary no matter where you eat them.

I tentatively made my way to the chicken and that sauce. The first bite revealed a beautifully cooked bird with a distinct and satisfying char flavor, just peeking through sauce with a tangy, sweet yet spicy combination of flavors. It took me a few bites to get accustomed to it. By the fifth or sixth bite I started scooping the rice and beans into the sauce. A couple moments later the plantains were going in. By the end of the meal I wasn’t worried about my shirt anymore and just devouring what I could. Out of the corner of my eye I saw the plate shared by a couple next to me. Oxtail, slathered in more sauce. I wanted that, too. Something about that sauce had turned me into a happy devouring machine.

Somehow I managed to stay dry; I’m assuming because I was motivated to get everything into my mouth. Little wonder these guys have held down this spot over 20 years, with its bamboo chute veneers and otherwise understated Jamaican décor. I’m sorry it took me 10 years to find it.