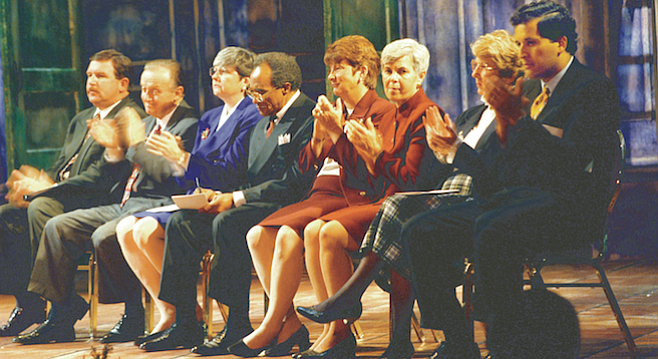 From the Archives is the Reader's new series spotlighting articles from over 40 years of the Reader's journalistic history. This week's theme is investigative reporting. 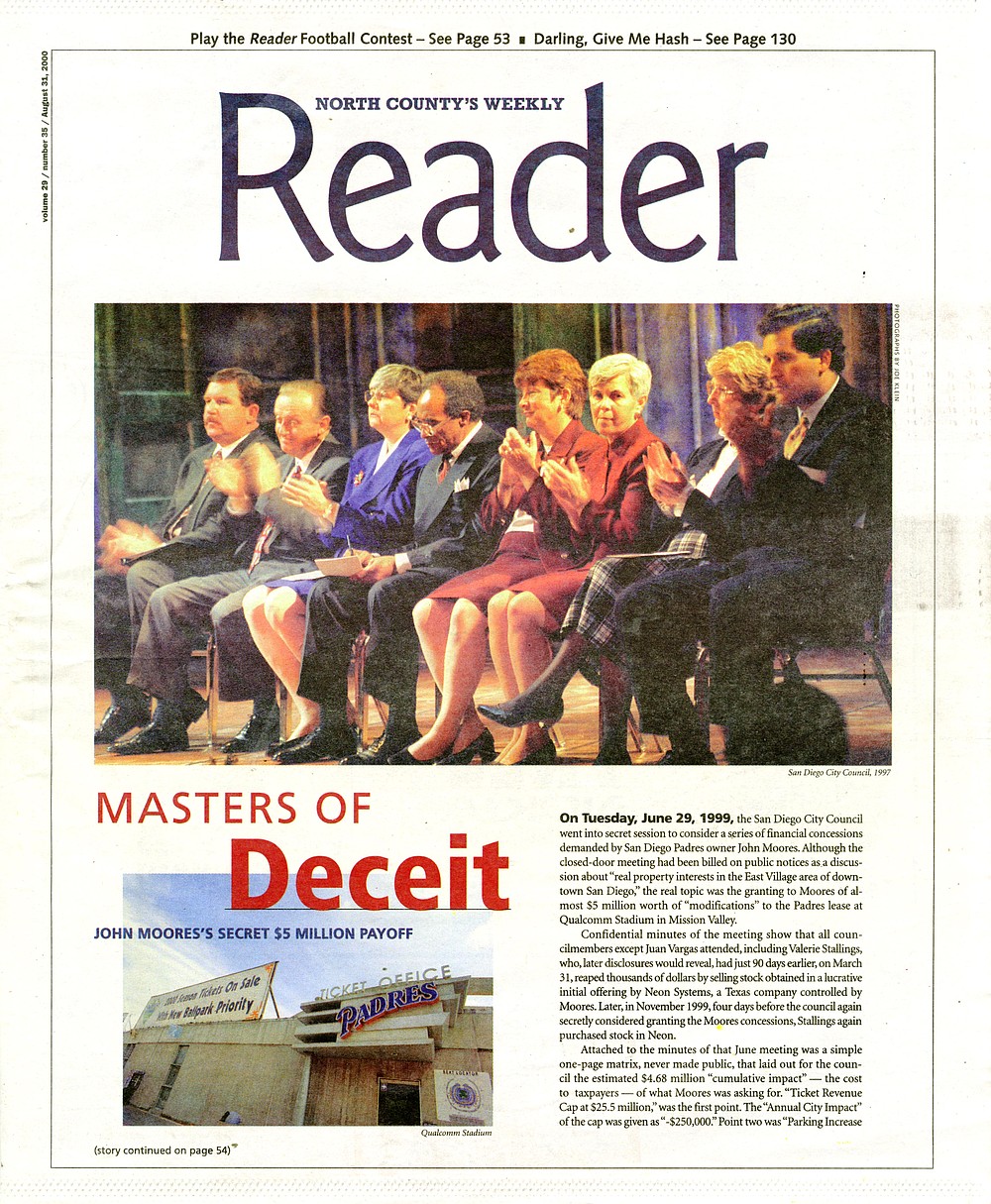 “On December 14, 1999, despite urgings from the San Diego Taxpayers Association and others to delay its vote, the city council voted to push ahead with bonds for the new downtown ballpark. There was no public discussion of the Qualcomm concessions and no further mention of them in the Union-Tribune.” 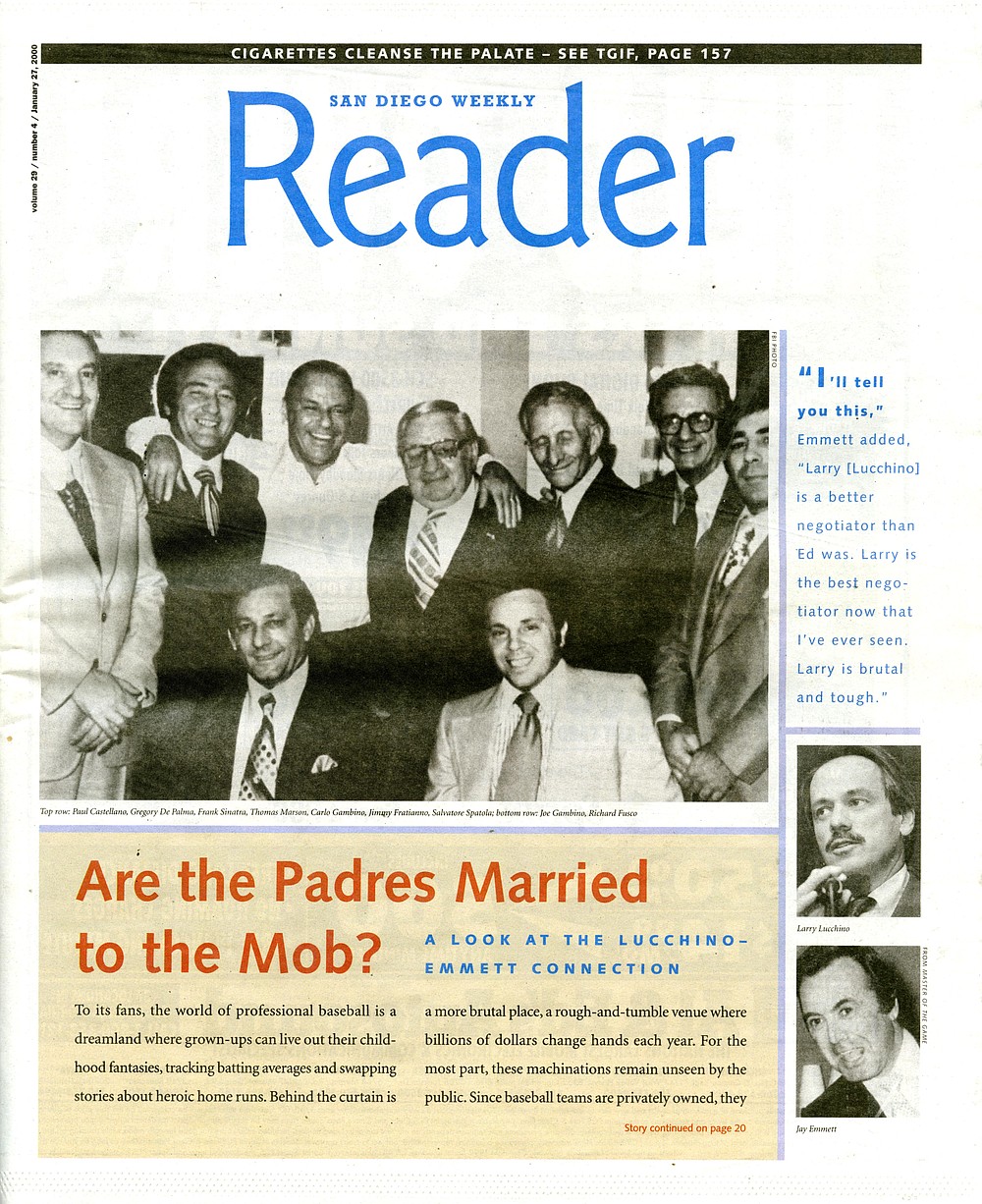 Lucchino, who Emmett says once dated Kennedy cousin Maria Shriver, approached her father R. Sargent Shriver and his son Bobby and discussed putting a deal together for the Orioles.

Are the Padres Married to the Mob?

“Jay Emmett is said to be an advisor to the Padres on deals like Metabolife and other sponsorship and marketing arrangements. An old friend of team co-owner Larry Lucchino, Emmett, 71, whose home base is a Central Park South apartment in Manhattan and who reportedly serves on the Padres board, has enjoyed a low profile in San Diego.” 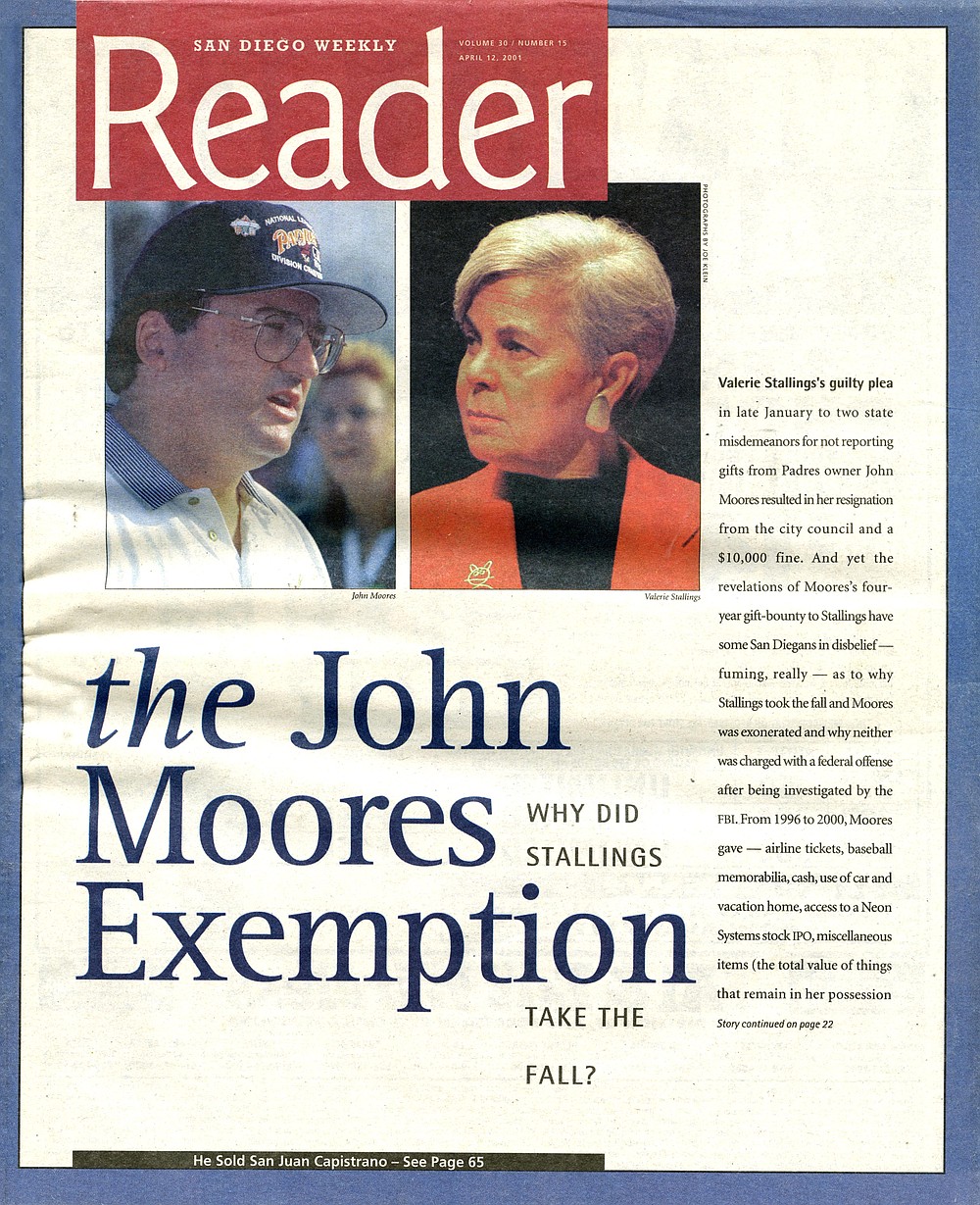 Stallings fined; Moores gets off free

“Valerie Stallings's guilty plea in late January to two state misdemeanors for not reporting gifts from Padres owner John Moores resulted in her resignation from the city council and a $10,000 fine. And yet the revelations of Moores’s four-year gift-bounty to Stallings have some San Diegans in disbelief as to why Stallings took the fall and Moores was exonerated.” 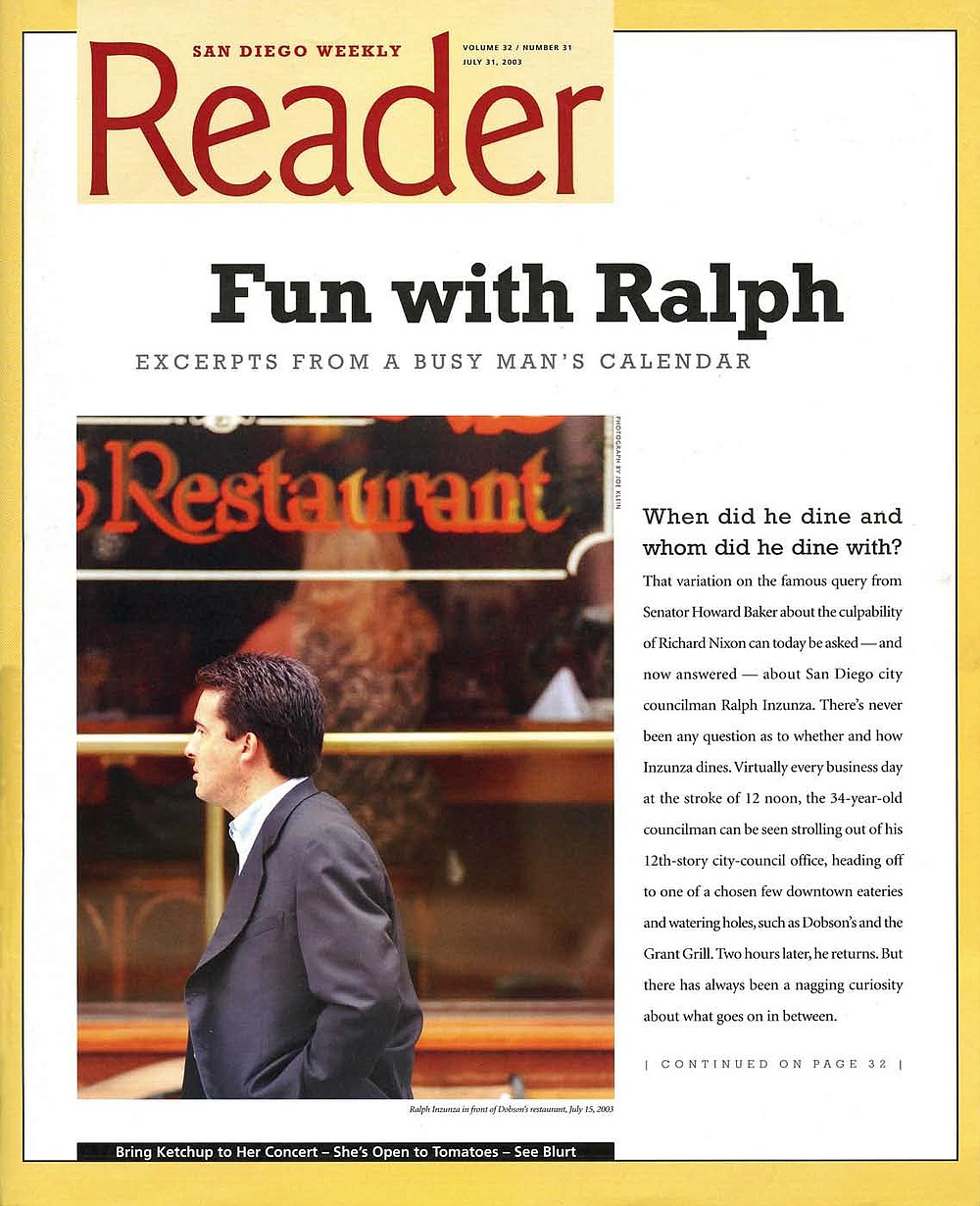 Fun with Ralph: Excerpts From a Busy Man's Calendar

“Virtually every business day at the stroke of 12 noon, the 34-year-old councilman can be seen strolling out of his 12th-story city-council office, heading off to one of a chosen few downtown eateries and watering holes, such as Dobson's and the Grant Grill.” 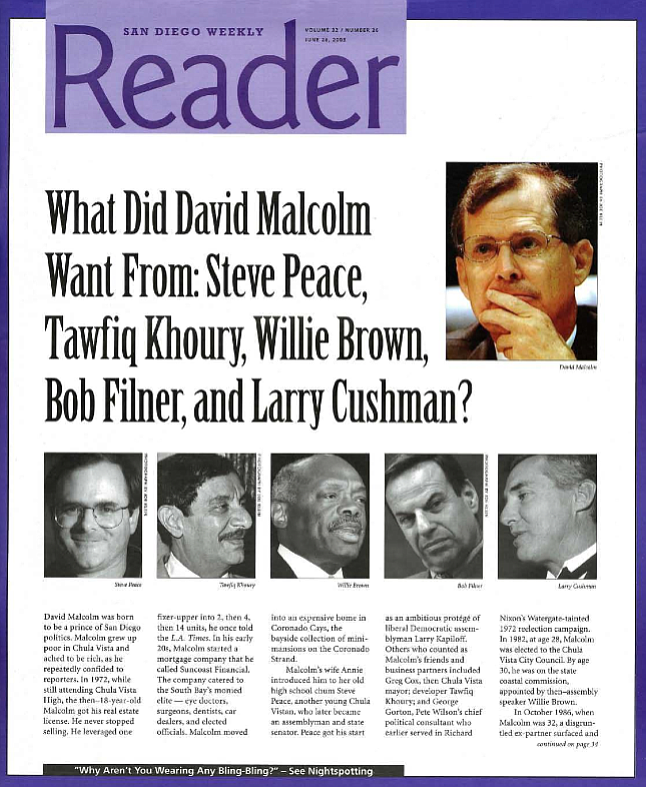 In October 1986, when Malcolm was 32, a disgruntled ex-partner surfaced and claimed he had a tape recording of Malcolm urging him to blow up a house for $1.3 million in insurance money. "Why couldn't somebody just go in and turn on the gas downstairs, leave the burner on upstairs with a candle burning, and when the gas gets to that, it would just blow up?" Malcolm was heard saying on one tape provided to the Los Angeles Times. 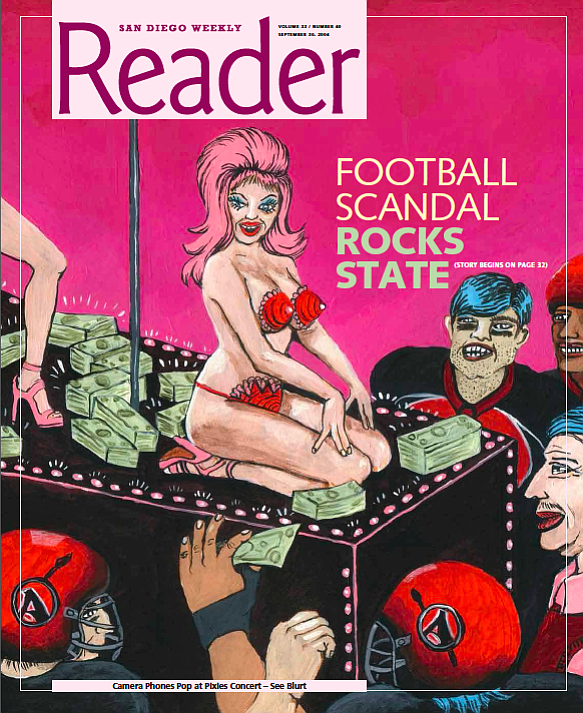 "I had a son who played high school football, and I wanted him to be recruited by SDSU. I explained this to Ms. Roush." A few days later, Sutton said, he got a phone call from some associates who had found out he had been an "informant" to Roush.

SDSU’s Rick Bay had been forced to resign after a university auditor uncovered a 2001 photograph of a group of SDSU coaches, players, and boosters surrounding a topless dancer at a strip club called Columbus Gold in Columbus, Ohio. Written across the bottom: "Party Animals!"