Popular hike leads to a pinyon forest and spectacular views 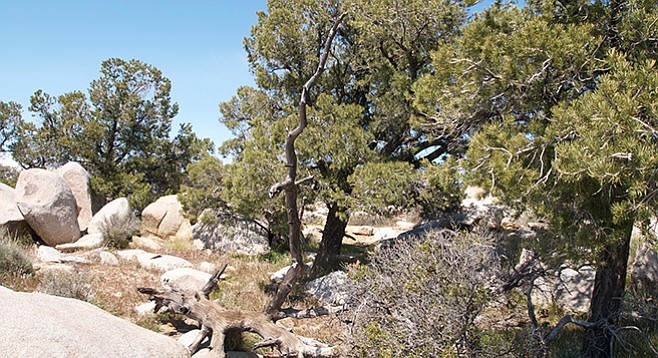 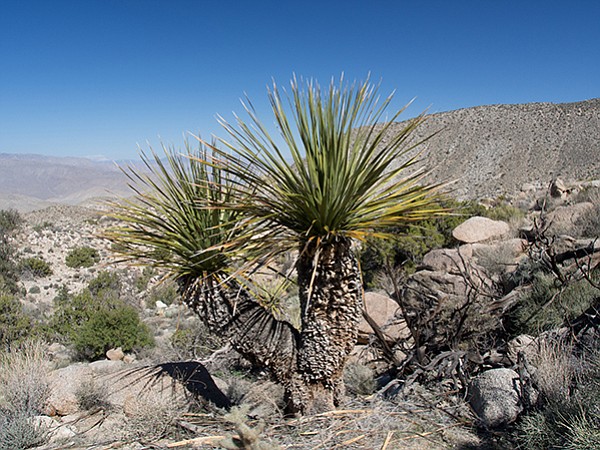 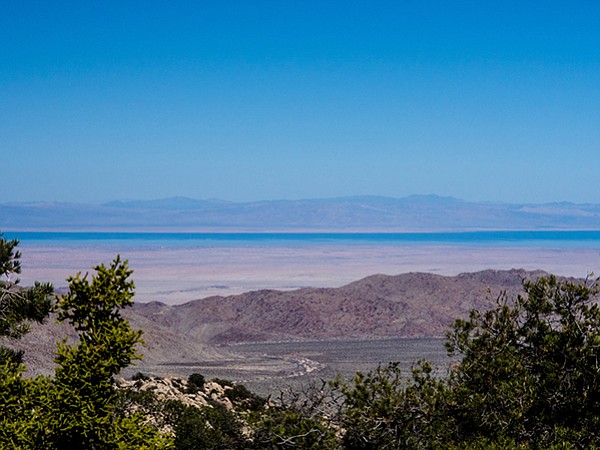 Looking toward the Salton Sea 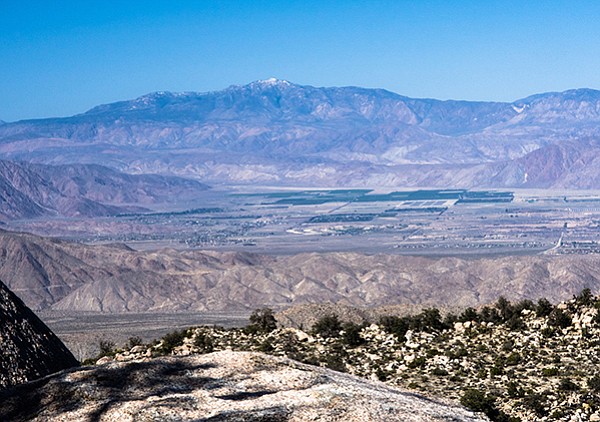 The Santa Rosas and Toro Peak loom over the Borrego Valley from the top of Whale Peak. 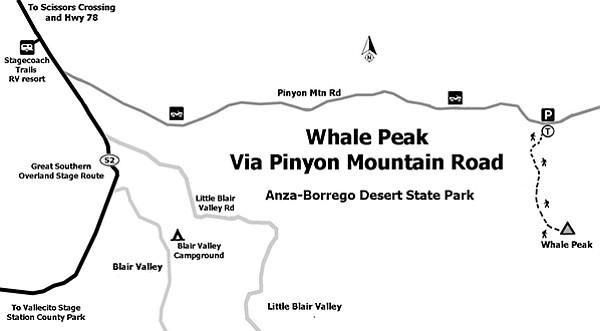 Whale Peak, though not the highest peak in the Anza-Borrego Desert State Park, is high enough at 5349 feet to offer spectacular views of much of the park and mountain ranges in Mexico and Arizona. It is also high enough to support an extensive pinyon-juniper woodland, a beautiful forest of miniature trees.

At mile 5.7, start hiking up the steep, boulder-choked canyon straight ahead. Consistently look back for landmarks while climbing around and over boulders where there will be only occasional stacked rocks (ducks) to mark the path. After climbing for about a quarter of a mile, there will be a sandy flat. Starting at this point, there will be an obvious path created by hundreds of other hikers who have ventured up this mountain. Although marked with frequent ducks, don’t rely too much on them, as there are numerous other routes going in various directions, also marked with ducks. This hike offers an excellent opportunity to practice route-finding skills.

There are three more ridges to climb before reaching a point where the final ascent to the top of the broad, relatively flat, Whale Peak begins. Explore the peak area to find the best vantage points to view the Salton Sea to the east, Agua Caliente County Park to the west at over 4000 feet below, and northeast to the Borrego Valley, the Santa Rosa Mountains, and Mt. San Jacinto.

Although the views are inspiring, be sure to take some time to observe the variety of plant life in this juniper-pinyon woodland. In addition to the single-leafed pinyon pine and California juniper, you will also find scrub oak, huge Mojave yuccas, an abundance of silver cholla, as well as the occasional beavertail cactus and desert apricot. The Kumeyaay Indians collected pinyon nuts in late summer.

Once you have thoroughly explored the peak area, return to your car the way you came. Be sure to be careful when selecting a route based on ducks or you could end up down from the mountain but many miles from your vehicle. It can be helpful to turn around and look for landmarks noted on the way up — most trails look different on the return!

Note: This hike is best done from October through May, with the best chance of finding blooming wildflowers in March or early April. Map and compass or GPS are recommended for route-finding. A 4WD vehicle and trekking poles are recommended.

Distance from downtown San Diego: About 84 miles. Allow 2 hours driving time (Shelter Valley). From Julian, travel east on SR-78 for about 12 miles down Banner Grade to Scissors Crossing, then go south on SR-2 for 4.9 miles and turn east onto the signed Pinyon Mountain Road (PMR). Almost immediately, the dirt road splits, so keep going east for 5.7 miles over areas of deep soft sand, bumps, deep ruts, and rocks, and park where there is a short spur road going off to the south toward Whale Peak. Be sure to note your mileage after turning onto PMR, as there are similar spur roads going toward Whale Peak at 4.1 and 6.3 miles from the SR-2. All three have been used as starting points but the route starting at mile 5.7 is the most frequently used to Whale Peak, and the one described here.

Hiking length: 4 miles out and back.

Difficulty: Moderately strenuous, with an elevation gain/loss of 1500 feet. Dogs and mountain bikers not allowed. No facilities or water.