Could be why the city ordered an environmental impact report. Seriously. 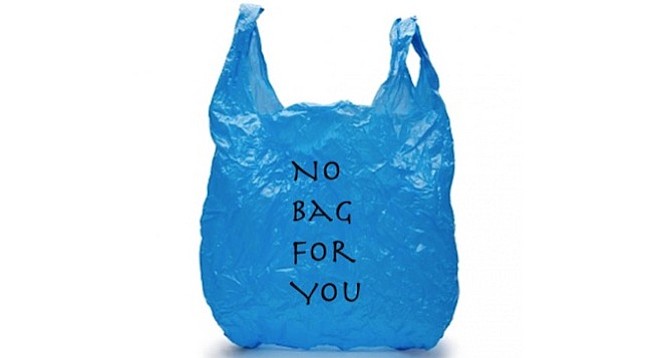 The proposal to ban plastic bags in the City of San Diego is moving forward but not before the city conducts an environmental impact report.

According to a city notice, San Diego's Planning Department is requiring a full environmental review of the plastic-bag ordinance due to the "significant environmental impacts" the ban will have on air quality, greenhouse gas emissions, agricultural resources, and water quality.

As currently proposed, the ban prohibits the use of single-use plastic bags at the point of sale at all retail shops with over $2 million in annual sales as well as at all supermarkets, drugstores, and convenience stores. In place of plastic, the ordinance requires that retailers offer customers reusable bags for free or at a cost and single-use recycled paper bags at ten cents a pop.

Currently 139 municipalities throughout the state have adopted similar ordinances. San Francisco was the first major city in the nation to adopt a citywide ban on plastic in 2007. In San Diego County, things have moved a bit slower; Encinitas is the only city in the county to place a ban on plastic. The ordinance went into effect on April 10 at major retailers.

Similar efforts to ban plastic bags at the state level have occurred as well. In September 2014, governor Jerry Brown approved legislation that would have banned single-use plastic bags. The law, set to go into effect in July, was put on hold after a referendum funded largely by the plastic-bag industry forced lawmakers to place the bill on the November 2016 ballot. In the meantime, San Diego will move forward with its own ban.

For what other project has the City of San Diego required a full environmental impact report in recent memory? Our Mayor and his Planning Department are transparently in the pocket of the plastic bag boys.

I am impressed with this sudden civic pivot, calling for an EIR just as an important green proposal looms. Usually, EIRs are denigrated downtown as nit-picky, time-consuming, delaying tactics.

Apparently we don't want to move forward too quickly -- as per voters' wishes -- with finding alternatives to damaging plastic bags.

The EIR is actually a good thing. It is an exercise the City is going through to protect themselves from litigation which would delay implementation much longer than it takes to do an EIR. The draft EIR is all but done anyhow. There are enough votes on Council for this to pass.

Arizona has taken it one step further...or maybe that's one step back, depending on your point of view. Not only will the state not ban plastic bags, the morons who run the state passed a law that goes into affect on July 1 making it illegal for individual cities to impose bag bans. But they didn't stop there. The same law that made it illegal for cities to ban plastic bags also applied similar restrictions on Styrofoam containers and other disposable products. Of course, one has to take into account that these are the same morons that also enacted laws forbidding those same cities from rising the minimum wage and enacting taxes or regulations on firearms.