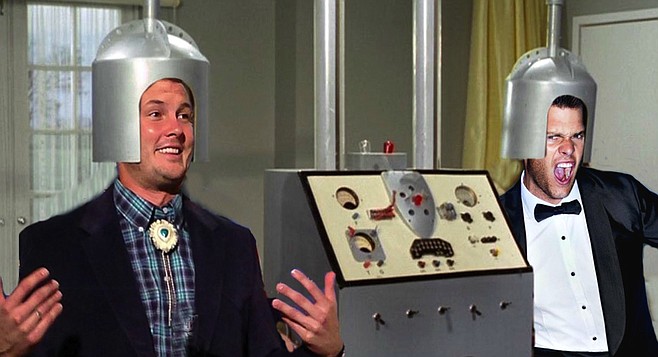 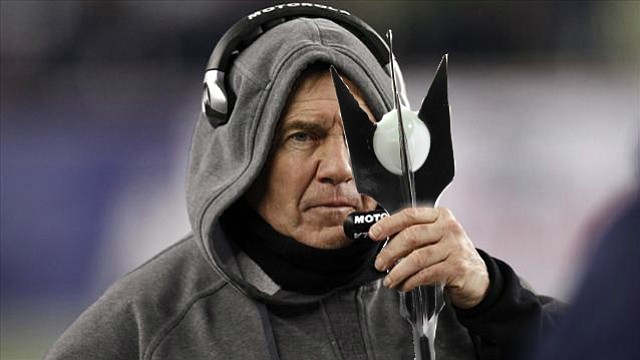 Patriots Head Coach and Chief Necromancer Bill Belichick consults the Pearl of Seeing embedded in his Coaching Staff in order to divine his opponent's upcoming play in a 2012 game against the Buffalo Bills. "Just one of the marvelous inventions this trade will let us play with," gushes McCoy. "With this whole stadium scenario shaping up the way it is, we really need a tip-top season to get the locals excited if we're going to stay in San Diego. Something like what the Padres did when they sacrificed the San Diego Chicken to the Dark Gods in order to make the World Series in '98. They lost the Series, but they got their stadium. Totally worth it."

McCoy was referring to this week's blockbuster news that the Chargers had agreed to trade Philip Rivers' immortal soul to the Patriots, in the hopes that it will help Tom Brady overcome his current predicament. Brady was suspended for four games of the 2015 NFL season for his involvement in Deflategate: the intentional deflation of footballs during the Patriots' game against the Indianapolis Colts in last season's NFC Championship game. (Deflating footballs makes them softer and easier to catch.) The Patriots won, and went on to win the Super Bowl against the Seattle Seahawks. An NFL investigation into the matter concluded that Brady was almost certainly aware of the deflation, and quickly punished the handsome star for his cheating ways.

"All of a sudden, it looked like Tom Brady could stand a little of the ol' Rivers Rectitude," laughs McCoy. "I called [Patriot's Head Coach and Chief Necromancer Bill] Belichick, and we had a deal hammered out in two hours."

"Philip has always been an extremely decent person, both on and off the field," explains McCoy. "For years, we've tried to figure out a way to turn that bone-deep goodness into playoff victories, without success. Now, his virtue has proven to be just the asset we needed to gain access to the most prized strategic stash in all of sports: Belichick's bag of dirty tricks. Illegal videotaping of opponents, deflating footballs, you name it. The thing is bottomless, so you never have to use the same trick twice. I can hardly wait. Oh, and we'll get a couple of players, too. In the end, you gotta have players. But those dirty tricks…"

McCoy stressed that the Rivers-Brady soul transference would not be a soul-swap. "Frankly, Philip values his reputation as a Christian and a family man too much to allow a handsome devil — and I do mean devil — like Tom Brady to run amuck in his body. For the time being, we'll be using the soul of [newly acquired Chargers backup quarterback] Kellen Clemens to animate Philip's body on game days. The Patriots will retain full control of Brady's spirit — though what they're going to do with it, I shudder to think."