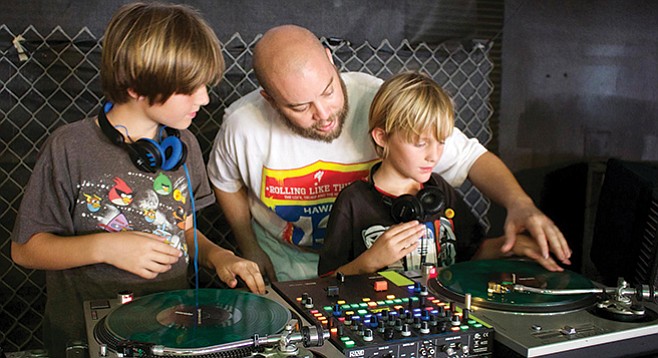 "Vinyl stores are multiplying in San Diego right now.” Eric Howarth should know — he spends a lot of time in them. Founder of the Vinyl Junkies record swap meets held monthly at the Casbah, he also sells at record swap meets throughout Southern California. Five years ago, he sold his Hillcrest-based M-Theory Records (the new owners recently opened up a second location in Del Mar), but Howarth stayed in the business. “I love vinyl. It’s what I know. It’s a good way to pay the bills while I pursue other things.” Other things would include filmmaking and the opening of a new all-ages Vinyl Junkies record swap at the Epicentre in Mira Mesa.

“We kept hearing from people in schools and colleges or from people who had kids. They wanted to come to the Casbah swap. Students would call and say, ‘Hey, I’m not 21, but can I get in?’” No. The under-21 crowd isn’t allowed through the door there. So Howarth went to the regional teen center established in 1998 to serve as a hub to youth programs in the Mira Mesa area, and he pitched the idea of hosting an all-ages record swap. Epicentre’s management said yes.

Wax, Howarth says, is gaining popularity among digital-age youth. He finds adolescents in general to be curious about the different kinds of music they see in the crates at record swaps. “But one thing is consistent. Teen record-buyers always gravitate toward classic rock and metal albums. Led Zeppelin, Pink Floyd, the Doors, Jimi Hendrix, the Beatles, Cream, the Rolling Stones, and so on. And the gems from the ’80s, like AC/DC, Iron Maiden, Metallica, Judas Priest, Van Halen, and Rush. Those are the staples you can count on that age group to be looking for.”

“We’ve got a lot of kids coming in here looking for hip-hop.” Soul (he prefers to use his nickname) opened Alma Music and Audio in Bird Rock with two business partners in March. “And we’ve got old guys coming in here looking for classical. Deejays,” he says. “We have a lot of deejays among our customers, even though they’re not buying for the same reasons as recreational listeners.” Alma deals audio gear and new and used vinyl, “from reissues to audiophile quality discs. We have everything — rock, pop, world, soul, and hip-hop.”

Soul says he’s been in the record business for 20 years, with retail shops like Amoeba in Berkeley and Groove Merchant in the Haight on his résumé. “I’ve seen a lot of record stores come and go. I’ve seen the demise of the CD,” he laughs. “CDs are not entirely gone, but the vinyl business,” he says, “is better than ever.” Why? “Vinyl is coming back because people want to retrieve that experience that was lost in the CD world. Records felt good. People liked the art work, liked showing friends the covers. There was more of a connection going on between the artist and the public with vinyl, more than downloading a track from Soundcloud or wherever.”

Bernie Fishman agrees. The 32-year-old opened Beat Box Records in Barrio Logan five months ago. “People want something more tangible than an MP3, and there is something about records that will always be cool. Also, and more importantly, more and more young people are realizing how much incredible music was recorded in the past 60 years,” music he says that can’t be found on iTunes or on CD. Fishman’s customers range from “high school kids who save their lunch money for records to older folks who never stopped loving records. Most of our clientele is in their 20s and 30s, though.”

The Epicentre version of Vinyl Junkies will, for all intents and purposes, follow the format as the original swap at the Casbah, including deejaying. “I love having band members come in and spin records all day,” Howarth says. “For the Epicentre shows, I have members lined up from Big Bad Buffalo, Sledding with Tigers, Justin Pearson from the Locust, and they’re just gonna spin. Having actual bands play music while people are trying to shop doesn’t work. But it’s fun to get band members up there who have never deejayed. I give them a little tutorial and the next thing you know, they’re deejaying in clubs around town.” He laughs.

“I’m not militant about vinyl being better than digital. There’s a time and place for each format. But sometimes, you’ll have time to enjoy music in another way.” Howarth’s talking about the full album ride: liner notes, cover art... But is vinyl ever going to make a complete comeback? “From day one in 2001, when M Theory opened down here, we had vinyl in the shop. It’s kind of funny to have conversations about the vinyl resurgence. Vinyl,” he says, “never really went away.”

The next 21-and-up Vinyl Junkies swap at Casbah is on June 6, and the next all-ages swap at Epicentre is currently being scheduled.