Eastlakers don't eat what the suits serve up 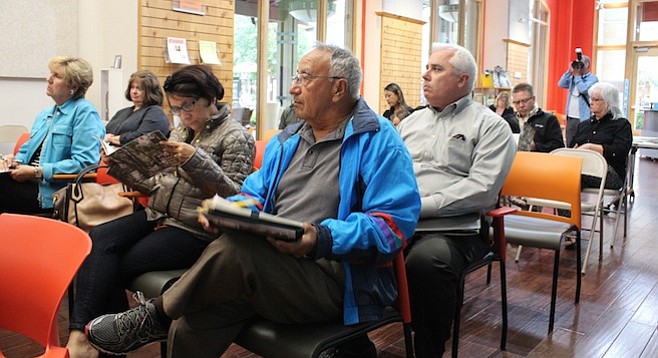 Chula Vista city councilmember Patricia Aguilar held a town-hall meeting on Monday, May 4, at the Hub inside Otay Ranch Town Center. She wanted to hear public comments about the proposal by developer Baldwin & Sons to construct 600 new residential units on a vacant lot adjacent to the mall. 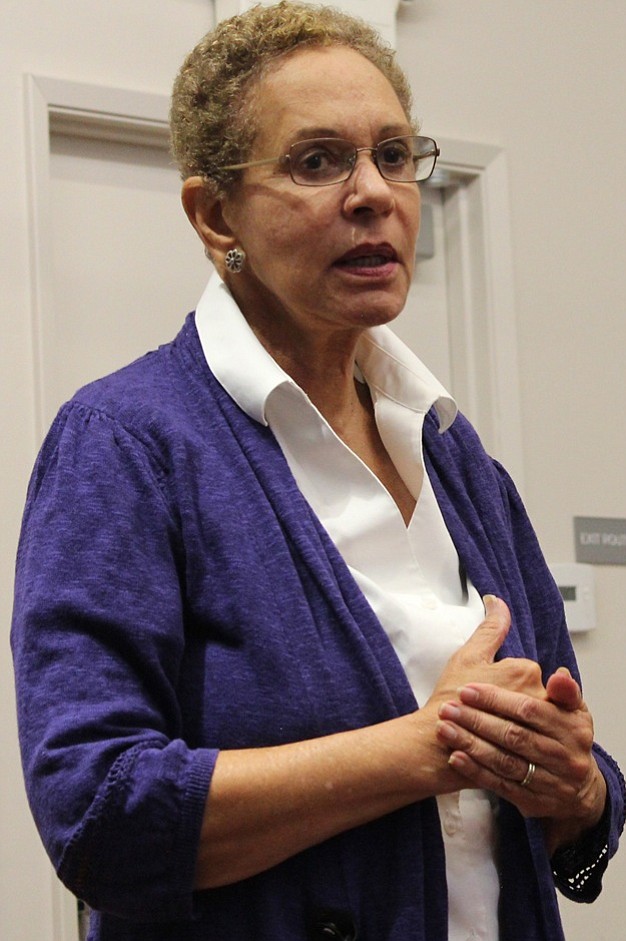 Patricia Aguilar said she hadn't made up her mind.

Aguilar received many emails and phone calls expressing concern over the developer's request to change the city’s general plan, which in 2005 designated the property as retail only. Instead, Baldwin & Sons wants to turn the area into a mixed-used village with a two-acre park, a Residence Inn Marriot, 15,000 to 30,000 square feet of mixed retail, and 600 new residential units. 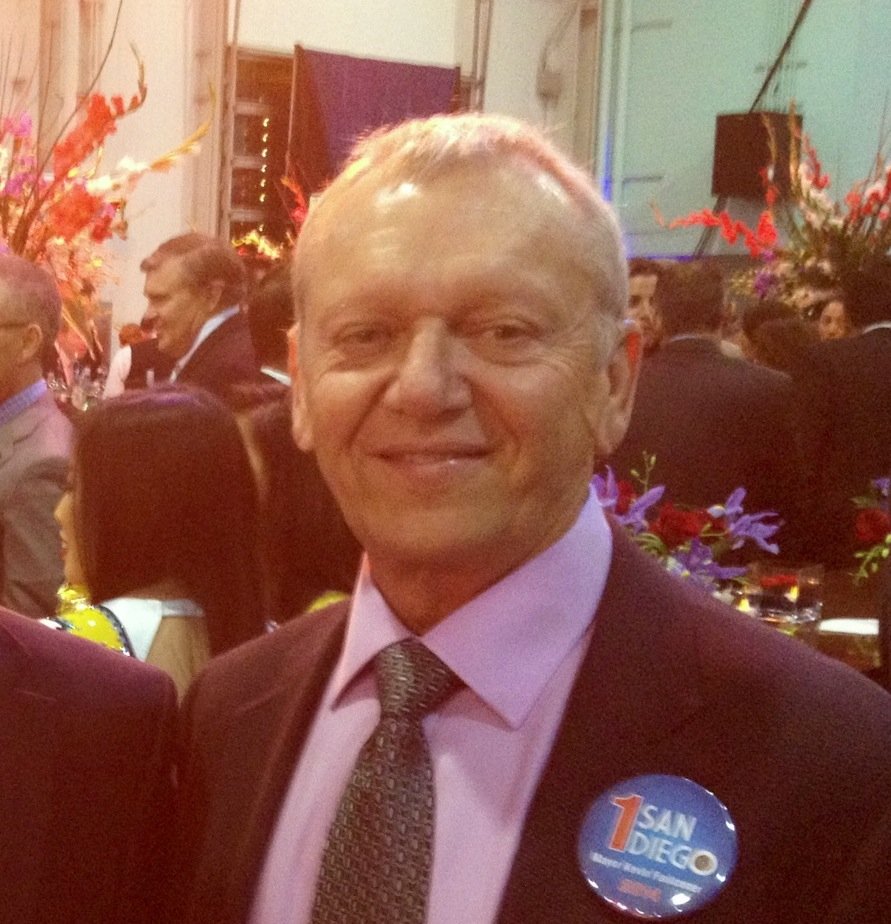 Baldwin & Sons bought the property in 1993 with the intention of turning the lot into “big box” retail space. However, Baldwin senior VP Stephen Haase explained, “What started this discussion was looking at that site and realizing that there really weren’t the types of retailers out there that we could put on that site.”

He further explained that their retail space would compete with the future 300,000 square feet of additional retail that Otay Ranch Town Center has approved; and the Millenia project on the other side of the mall, which will include 2983 residential units and 3.5 million square feet of commercial space.

According to Nick Lee of Baldwin & Sons, “This project actually reduces traffic. It takes it from 12,000 daily trips down to 6300 daily trips.”

Community members started to talk all at once and someone shouted, “That’s absolutely bogus.” 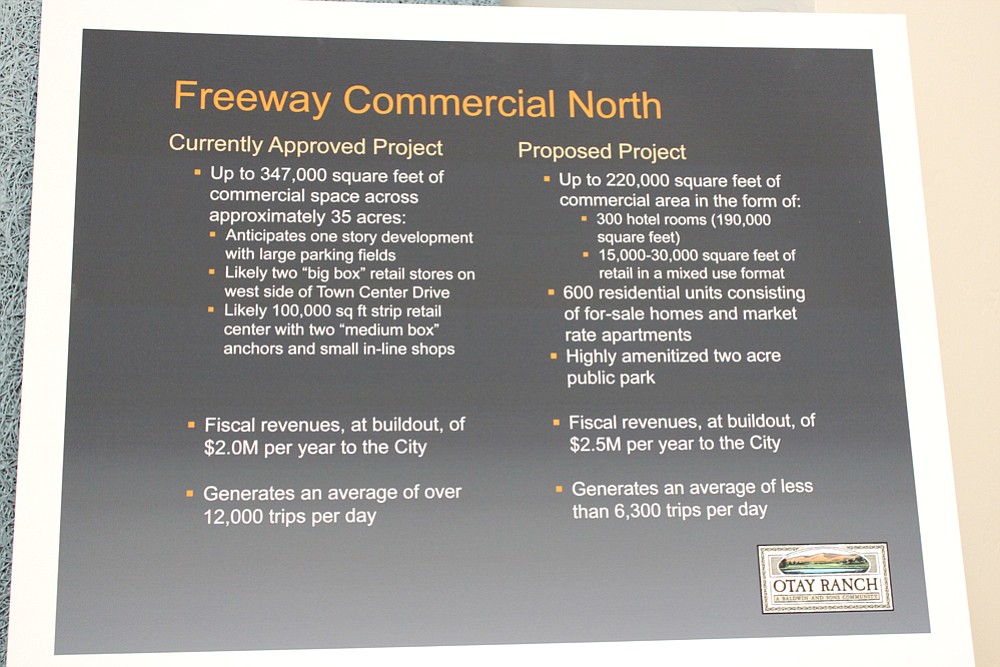 “The city needs to do a traffic survey…" 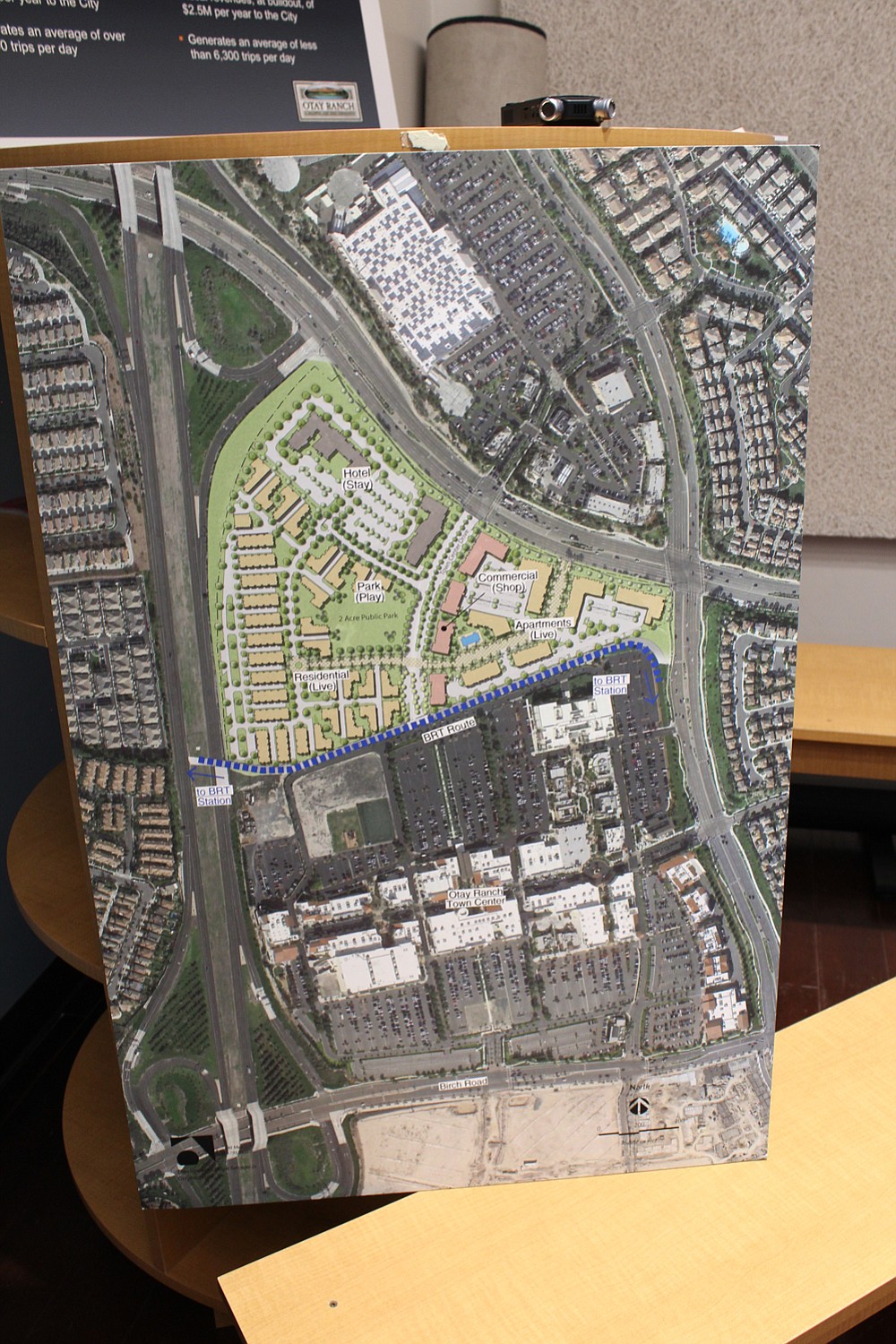 “The city needs to do a traffic survey…. I also even think we should get an independent traffic survey out here,” Rodney Caudillo said. “I don’t agree with the trip counts going down. I would like to know where they got that from.”

“It’s gonna choke the growth of the mall,” said Lynda Twork, owner of Kids On The Go childcare. She signed a ten-year lease at the Otay mall. She feels that offering more retail is a better option.

Twork responded, “They didn’t come to us as business owners and ask us. We were not involved.”

Councilmembers will vote to approve or deny the project next Tuesday, May 12, at a city-council meeting.

“I have not made up my mind about the project,” Aguilar said. “As far as I know, none of the other councilmembers have either.”

In an interview afterward, Haase explained what will happen if the city denies the proposed design. “We have no choice. We will go back to our original plan. It’s a retail project. We’ll go back and see if we can get those tenants we couldn’t get before.”

I would rather have housing than more retail space. It sounds like NIMBY to me. I got mine so I want you to go someplace else. Next Eastlake will want to break away from CV

Otay Ranch Town Center has 300,000 square feet of approved retail space that has not been developed. This is a correction to the 3000 square feet listed in the article.

I was not able to attend but my primary concern is the overcrowding of our local schools. Every elementary, middle and high school in Eastlake and surrounding areas is overcrowded. Camarena Elementary just opened a few years ago and they already have portables! The Sweetwater District has no money to build the needed middle and high schools even though they have the land. I have a daughter in middle school and a son in high school. All of their classes have 35-45 students in them. The schools are extremely overcrowded, and adding more housing to what we have now, is being built at Millenia and Otay Ranch will continue to lower the quality of education in our area - one of the primary reasons we moved here! Hopefully our city council will weigh the impacts of more housing in the overall quality and impacts to our area.

It is important to note that the overcrowded conditions in the Sweetwater Union High School District secondary schools are due to the total lack of responsibility shown by the prior SUHSD administration in offering 'open enrollment' throughout the District instead of shoring up neighborhood schools in other areas and working to correct deficiencies there.

Once so many schools on the west side became 'needs improvement' status, parents understandably moved their students to the better performing schools....hence the overcrowding in the schools with better academic records.

It really is not fair for families who are paying extra Mello Roos taxes specifically to provide for adequate schools in their neighborhoods to have to accommodate the influx of students moving from schools in other neighborhoods. And it is absolutely not fair for students in ANY school in the District to have to attend a school that is in 'needs improvement'. What a mess!

Additional apartment and condo density is NOT what this area needs! A hotel and a new middle school are needed TODAY. How about a park and more open green space for public use? A second "Mini-Millenia" project, to me, is not ideal.

There are already too many apartment complexes here and the traffic congestion is horrible. And regarding the schools being overcrowded, the current school boards keep using the Mello-Roos money that is designated for new facilities on other things. SUHSD continues to move Mello-Roos money outside of the designated areas, and also spends the money on iPads and other unauthorized expenditures.