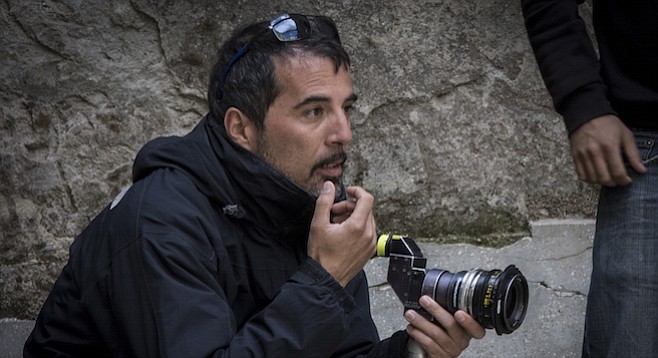 Last March — and with one foot out the door to catch a screening of The Gunman — a call comes in from Reading Cinema’s Jo Brantferger. They’re opening something in two months called Black Souls, and there was a brief window of opportunity to interview the film’s director, Francesco Munzi, before he returned to Italy from a New York press tour. With two under my belt and one in the chamber, it was one of those rare days when the last thing I needed was another movie. 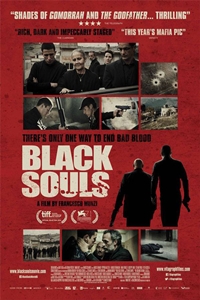 For all I knew Black Souls was a gospel doc or a tribute to Fred “The Hammer” Williamson. “It’s an Italian gangster drama,“ Jo pressed, “and one that I think you’re really going to like.” A cherished genre being tipped by an equally adored (and knowing) publicist? It was an offer I couldn’t refuse.

Anything would have looked good after experiencing Sean Penn’s botched attempt to ride Liam Neeson’s coattails, but this sweetened the bad taste left by the three features that preceded it. The interview was scheduled for noon, giving me just enough time for a second viewing. It’s the most original gangster film to hit the multiplex since Casino, with an ending that will leave you gasping. Thanks, Jo!

Scott Marks: Normally I would have tracked down copies of your two previous films (Saimir and The Rest of the Night), not to mention Luchino Visconti’s Rocco and His Brothers. What movies did you consult while making Black Souls?

Francesco Munzi: First of all, I would be very honored if you could see my other two films. The imagery I use in this film reflects Visconti, but also the Italian neorealist tradition, especially the use of dialect. I avoided seeing mob movies when I was doing my research and instead just looked to the films that I love. I looked not just at the masters — the fathers of Italian cinema. I tried to invent something new, while looking back on the tradition, particularly of the 1950s.

SM: Tell me a little about the origins of the term ’Ndrangheta.

FM: The origins of the term are not known. Some say it comes from a children’s game. Some say that it comes from a dance. What ’Ndrangheta does define is the organized crime syndicate of Calabria. It’s a very ancient syndicate, but it’s only become extremely powerful in the past 15 years. The unique characteristic of the ’Ndrangheta is that, on the one hand, it’s tied to an archaic lifestyle, for example the shepherds, the goat-herders you see. On the other hand, it’s tied to large construction interests throughout Europe. It’s also connected to the kind of Mexican drug trafficking that opens the film.

SM: Westerns and musicals have long died, and sci-fi lives on almost exclusively in digitized comic-book form. What is it about the gangster genre that seems to defy time?

FM: I think that some gangster films are really opportunities to show family drama along the archetype of a Greek or Shakespearean tragedy. They’re universal and open up the possibility of bringing this kind of tragedy to a worldwide audience. To this I have to add, while I was shooting this film in a very untamed part of Calabria, sometimes I felt as if I was making a western rather than a mafia tragedy. 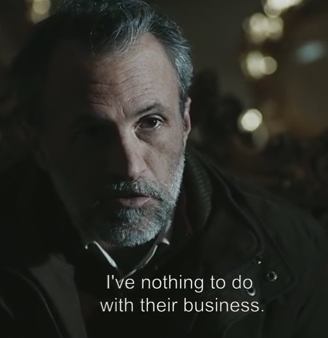 SM: Did you find the location or did the deserted villa find you?

FM: It was easy. The author of the novel took me there. He is from that town. (Laughing.) The name of the town is Africo, and it is divided into two parts. There is the new part of town — the reconstructed part of town that is on the sea — and there’s the old part of town, that part that’s abandoned up in the mountains. This town, with its dual existence, is considered by the Italian judiciary and Italian crime reporters as the nerve center of the Calabrian ’Ndrangheta.

SM: There is one moment that I flat out did not understand. What’s with Luciano’s miracle tonic, the concoction made of ashes, water, and a few drops of who-knows-what?

FM: This film takes place beneath Aspromonte, the mountain where Garibaldi had his main defeat. Some pagan rituals are still practiced. This is a way of showing Luciano’s ties, his connection to the mountain, where they believe if you drink the dust that accumulates around a holy figure it will help cure mental illness. He believes in the ritual, though not entirely. You can see that, because he also adds regular medicine to the drink, a move which epitomizes the division between the modern world and the archaic world.

SM: I’m not sure whether to credit you or novelist Gioacchino Criaco, but this is one of the simplest, most ingenious ways ever devised to cap a gangster film, and one that in retrospect left me wondering why no one ever thought of doing it this way before.

FM: The ending was really the starting point of my film. In order to resolve family tragedy, it had to be resolved within the family. I tried to conserve the novel’s basic feel of self-destruction, but the plot is very different. It was quite a struggle to get that ending passed. First of all I had to get my other two collaborators on the screenplay to accept it. Then I had to get television to accept it, because they were financing the film. What I wanted to do was give more depth to Luciano who is suffering because he doesn’t believe he belongs in this family. This act brings out something very natural in him even if it is shocking.